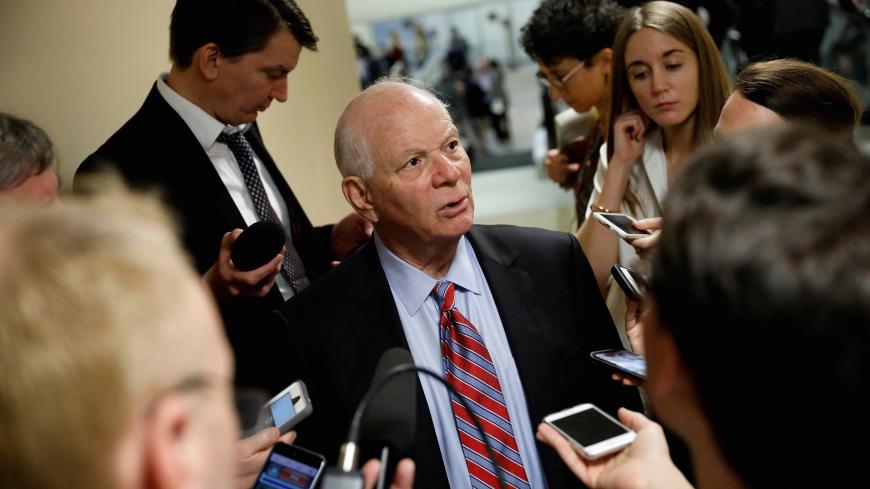 The increasingly partisan nature of US policy toward Israel was on full display when the liberal Jewish lobby J Street for the first time offered a prime speaking slot to one of the Jewish state’s most hawkish defenders during the organization's 10th annual conference today.

Sen. Ben Cardin, D-Md., a staunch ally of Israel who was until recently the top Democrat on the Senate Foreign Relations panel, stood out in a crowd of critics of Prime Minister Benjamin Netanyahu’s policies, including the Palestinian envoy to the United States, Husam Zomlot. But like his fellow Jewish Senate speakers Bernie Sanders, I-Vt., and Brian Schatz, D-Hawaii, Cardin shared his disdain for some of the Donald Trump administration’s policies, including its threats to unilaterally withdraw from the nuclear deal with Iran and ban refugees from several Muslim-majority nations.

Friends of Israel, Cardin said, have “a responsibility to speak out against the policies of Israel or the United States that are not consistent with our Jewish and Democratic values.”

“Welcoming one of the nation's very top lawmakers on foreign policy issues is a natural fit for J Street as we celebrate 10 years of changing the conversation in Washington,” Dylan Williams, a spokesman for J Street, told Al-Monitor. “I think the warm reception Sen. Cardin got from the room and the applause for the many points of agreement show that our supporters really appreciated hearing from him.”

He added, “If American Jews only had conversations with those we agree with 100%, we wouldn't be able to bring together two people for a conference, let alone more than 3,000.”

While introducing Cardin, J Street board member Victor Kovner praised the senator's role in leading the opposition to Trump’s pick of David Friedman as the US ambassador to Israel as well as his commitment to keeping the United States in the nuclear accord with Iran despite his 2015 vote against the agreement.

Still, Cardin got a frostier reception than Sanders, the only keynote speaker to receive a thunderous standing ovation as he delivered a speech that was scathingly critical of Israel’s lethal use of force against Palestinian protesters in the Gaza Strip since March 30. Notably, Cardin delivered his address the same day that five activists from If Not Now, a progressive group that opposed the Israeli occupation in the West Bank and Gaza, were arrested for blockading his Senate office over his refusal to comment on the Gaza protests.

For his part, Schatz touched on the tension, noting that he’s “committed to making the Democratic Party a big-tent, pro-Israel party where there’s room from everyone.” He mentioned Sanders and himself as well as Senate Minority Leader Chuck Schumer, D-N.Y., a clear favorite at the annual AIPAC policy conference last month.

While AIPAC considers Cardin’s anti-boycott bill as a vital tool to combat the pro-Palestinian boycott, divestment and sanctions (BDS) movement, J Street, while opposing BDS, has joined civil liberties advocates such as the American Civil Liberties Union in opposition to the bill over free speech concerns. J Street also argues that the Cardin bill seeks to “erase the legal distinction between Israel and the settlements,” arguing that makes a two-state peace deal between Israel and the Palestinians harder to achieve.

“It’s had some controversy, I understand that,” Cardin told J Street’s rank-and-file members. However, he argued that his most recent version of the bill addresses free speech concerns and left the door open to further revisions by noting “we’re still working on it.”

Cardin argued that the bill does not take sides on the final status of Israeli settlements in the West Bank, even though it does not differentiate between “Israel or Israeli-controlled territories.”

J Street’s inclusion of Cardin particularly infuriated Jerome Segal, a J Street member who likens himself to Sanders in his primary campaign against the Maryland senator. Neither Sanders nor his group, Our Revolution, have endorsed Segal, however.

Segal is the president of the Jewish Peace Lobby, a three-decade-old liberal group that favors a two-state solution. He launched his campaign largely as a response to Cardin’s ties to AIPAC and has proposed withholding portions of US assistance to Israel over its settlement activity.

In an interview with Al-Monitor, Segal referred to J Street's invitation as the “kosherization of Cardin." He said the left-wing group is “trying to join the parade of Americans who are hostile to the Trump administration” rather than stick with advocates who have always fought for Middle East peace.

Segal had hoped to create a viable challenge in the June 26 primary against Cardin with contributions fueled from J Street, which has not endorsed either candidate. The latest available campaign finance disclosures, however, indicate that Segal had only raised $200 to Cardin’s formidable $3.4 million in re-election funds.