For the first time in history, Palestinians and Israelis are joining hands and running in the same electoral list in Jerusalem's municipal elections. 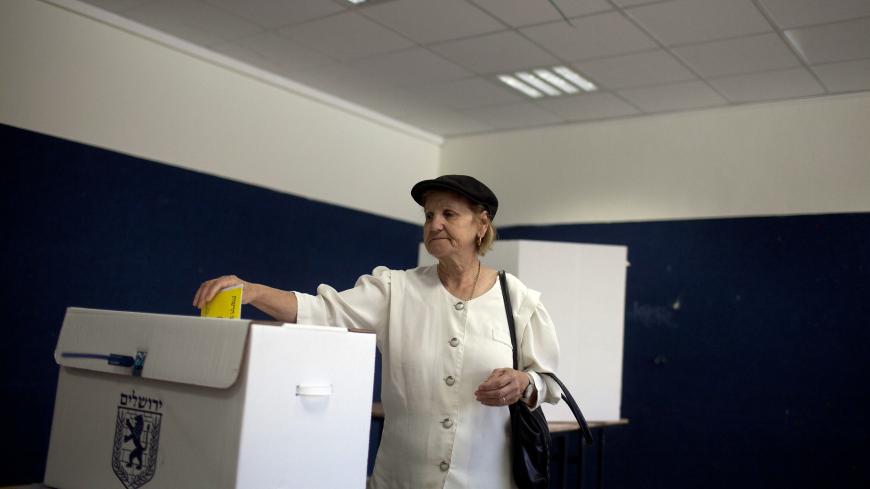 An Israeli woman casts her vote for the municipality elections at a polling station, Jerusalem, Oct. 22, 2013. - Lior Mizrahi/Getty Images

For the first time in a half-century, a joint Palestinian-Israeli list will compete in Jerusalem's municipal elections. The 350,000 Palestinians living in Jerusalem have boycotted the vote since Israel unilaterally unified Jerusalem in 1967 and created a single municipality, refusing to recognize and legitimize the Israeli occupation and annexation. Palestinians in East Jerusalem were given permanent residency but not citizenship, and thus can vote in municipal elections but not for the Knesset.

The former chairman of the Israeli Palestinian Bereaved Families for Peace, Aziz Abu Sarah, and Israeli researcher and co-director of the Israel Palestine Creative Initiatives think tank Gershon Baskin decided to run in the upcoming municipal elections scheduled for next November in a joint list. The announcement was made April 25.

Abu Sarah and Baskin said in a press report April 25 that the list will be equally divided between Israeli Jews and Palestinian Arabs and will include an equal number of candidates of each gender. Baskin indicated that the Israeli candidates will consist of Orthodox and Secular Jews and will represent different geographic areas. The heads of the list gave a long interview to the Israeli daily Maariv April 24, and the London-based Al-Quds Al-Arabi published its Arabic translation April 26.

The Palestinian leadership has yet to express an opinion on the issue. Palestinians involved in the plan are to meet with Palestinian President Mahmoud Abbas after the April 30 Palestine National Council meetings to brief him on the idea and platform, with the hope of getting his blessing or at least ensuring that he is not against them.

While the project's champions have different political positions on the eventual status of Jerusalem, they insist that they seek to address daily issues such as housing, jobs and infrastructure. Abu Sarah insisted in press interviews and in an article in The Washington Post that he supports Palestinian statehood with East Jerusalem as its capital. The official Palestinian position is that Jerusalem should be an open city, allowing free movement and worship for Palestinians, Israelis, Muslims, Christians and Jews.

Jerusalem’s Hebrew University surveyed 612 East Jerusalemites in January 2018 and found that 60% of Palestinians believe that Palestinians should vote in the municipal elections. It also showed that 97% oppose Israel’s unilateral annexation of Jerusalem, while a similarly overwhelming majority of 96% want to ensure that the city stays open and that the border between East and West Jerusalem isn't re-established.

Life for Palestinians in Jerusalem has been very hard with the ongoing pressure on them to leave. The lack of infrastructure including zoning plans makes it nearly impossible for Palestinians to get a housing permit, forcing as many as 20,000 to build without them. Legal life in Jerusalem is also highly politicized; there is only one office for Palestinians in the Israeli Interior Ministry, and it predominantly employs Israelis who enforce discriminatory laws and regulations designed to reduce the Palestinian population in the city. Since 1967, 14,000 Palestinians have lost their residency rights in Jerusalem due to administrative decisions.

Palestinians in Jerusalem believe that they are living without political support. They are not allowed to cooperate with the Ramallah-based Palestinian government, yet their own local institutions have been closed upon the Israeli military's orders. Organizations in Jerusalem such as the Orient House, the Chamber of Commerce, the Prisoner’s Club and others have been sealed since 2001 by Israeli order, thus leaving Palestinians without a political body to represent them.

A statement in Arabic, Hebrew and English states that the new list will be headed by Abu Sarah in cooperation with Baskin, who has been working for peace for 30 years. But it seems that a municipal list's head, who would automatically become a candidate for the post of mayor, must be an Israeli citizen, not a resident. Abu Sarah is not a citizen of Israel.

Without a single Palestinian representative at City Hall, Israel was able to tighten its grip on the city, distributing funding mostly to Jewish neighborhoods, approving settlement plans and building a wall that has cut 140,000 Palestinians off from their own city.

A list containing Abu Sarah, a brother of a Palestinian martyr in the first intifada and a decadeslong Israeli peace activist, is hard to accuse of selling off Palestinian rights. Yet the Jerusalem issue is so sensitive that it might take some time before the majority of Palestinians differentiate between municipal elections that are limited to the provision of services to the population and the political legitimizing of annexation, which not a single country in the world has recognized — not even the United States, which does officially recognize Israel’s civilian rule over occupied Jerusalem.