US President Donald Trump’s recognition of Jerusalem as the capital of Israel and other recent measures suggest that he thinks he can bludgeon Palestinians into accepting an unjust peace deal. 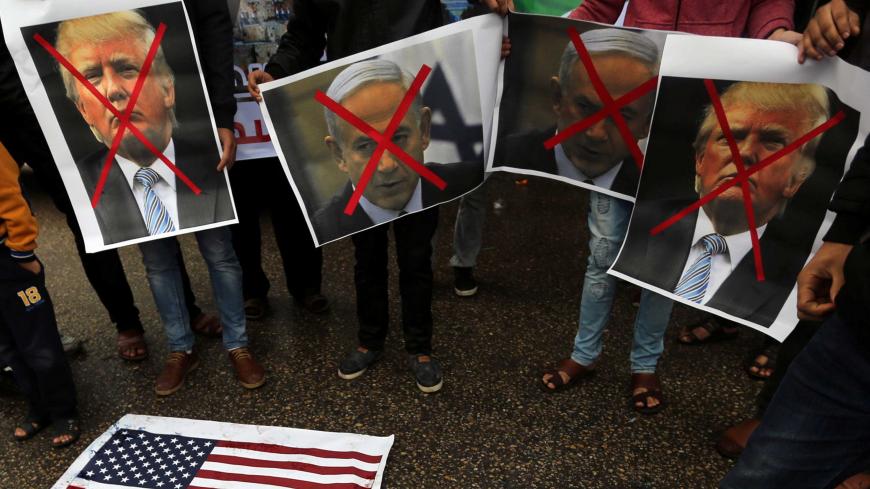 Demonstrators hold crossed-out posters of US President Donald Trump and Israeli Prime Minister Benjamin Netanyahu during a protest against the US decision to recognize the city of Jerusalem as the capital of Israel and its intention to move its embassy to Jerusalem, in Rafah, southern Gaza Strip, Dec. 6, 2017.

Based on recent actions by the United States, all indications suggest a desire by Washington to dictate a peace rather than mediate negotiations between the conflicting parties in the Palestinian-Israeli conflict. US President Donald Trump's pro-Israel administration seems to have adopted the view that the best way forward on the Jerusalem issue is to remove it from the negotiations by predetermining who has rights to it.

The Trump administration’s tactic appears to be the implementation of actions advocated by the right-wing Jewish American writer Daniel Pipes. In “A Palestinian Defeat Is Good for All,” a December 2016 article for the Jewish News Service, Pipes calls on the United States to reject all Palestinian claims to Jerusalem. “For Washington to be helpful means supporting Israel taking tough steps,” he wrote. “It means diplomatic support for Israel, such as undoing the ‘Palestine refugee’ farce and rejecting the claim of Jerusalem as the Palestinian capital.”

In less than a month, the United States has undertaken three actions designed seemingly to harm or coerce the Palestinians. The campaign began on Nov. 17 with the Trump administration threatening not to renew the PLO's mission in Washington. This was followed Dec. 5 by a voice vote in the US House of Representatives approving the Taylor Force Act to defund the Palestinian government because of its financial support of Palestinian prisoners in Israeli jails and their families. Trump capped the campaign on Dec. 6 by recognizing Jerusalem as the capital of Israel, in violation of United Nations resolutions, and announcing that he will be moving the US Embassy from Tel Aviv to Jerusalem.

On Dec. 5, The New York Times reported Trump administration officials as saying that the policy change “could hasten, rather than impede, peace negotiations by removing a source of ambiguity from the American position.” Trump presented this idea in his declaration, stating, “I have determined that it is time to officially recognize Jerusalem as the capital of Israel. I've judged this course of action to be in the best interests of the United States of America and the pursuit of peace between Israel and the Palestinians.”

Of note, Trump, who prides himself as an “America first” president, referred to Americans four times while mentioning Israel and Israelis 21 times. The US president, with this unilateral decision in defiance of the international community, appears to be saying that he is not necessarily seeking a negotiated peace between the Middle Eastern parties, but is deciding that the conflict is over, that Israel won and that the Palestinians must quietly and submissively declare defeat.

On Dec. 5, even before this folly was made official, Fatah Central Committee member Mohammad Shtayyeh had asserted to the independent Palestinian news agency Ma'an that Palestinians have not lost the will to say no. He said that the Palestinian leadership, in coordination with Jordan as well as other Arab states, will resist US dictates. “We have the ability to say no to any plan that touches on the status of Jerusalem,” Shtayyeh said.

In summer 2017, when the Israeli government tried to impose metal detectors at entrances to Haram al-Sharif and access to Al-Aqsa Mosque, Palestinians of all walks of life demonstrated outside the mosque for two weeks until Israel rescinded the unilateral decision it issued July 27. Some 300,000 Palestinians who live in East Jerusalem — along with 12 million Palestinians around the world, 370 million Arabs, 1.8 billion Muslims and many other peace-loving people of all creeds and faiths — support the just demands of Palestinians for a shared and agreed-to solution in Jerusalem.

The US shift in policy would make sense if Palestinians were being totally unreasonable and making excessive demands. It would also make sense if the Trump administration's position were supported by others in the international community and had the full support of the American people. This is not the case.

World opinion is overwhelmingly supportive of the Palestinians' moderate position calling for a two-state solution with East Jerusalem as the capital of the Palestinian state. Numerous resolutions by the UN General Assembly and the Security Council, as well as in the International Court of Justice, support the Palestinians’ just and reasonable demands.

Leaders of the Muslim and Arab worlds are not going to allow an issue that has become so ingrained in international law to simply be changed to satisfy the desires of a voting bloc in the United States. Riyadh's current honeymoon with Washington is the result of their joint opposition to Iran, not about Jerusalem and Palestine, on which Arabs and Muslims and others are united in supporting the need to resolve the status of the holy city in negotiations rather than by diktat. Saudi Arabia's King Salman bin Abdul-Aziz Al Saud publicly warned against Trump's move on Dec. 5.

Even in the United States, the majority of people — including most American Arabs and American Jews — support the idea of two states for two people. A poll released by the Arab American Institute on Dec. 5 shows that only 20% of Americans favor moving the US Embassy to Jerusalem.

Not everyone has been celebrating in Israel either. Twenty-five prominent Israelis, including former diplomats, generals and academics, sent a sharply worded letter to US envoy Jason Greenblatt on Dec. 5. They expressed their opposition to unilateral US action on Jerusalem, stating, “The status of Jerusalem, the city that houses the holy sites of the three monotheistic religions, lies at the core of the Israeli-Palestinian conflict and must be determined within the context of resolving that conflict.”

Successful peacemaking requires that any deal be strong enough to weather the test of time. To work and survive, a deal has to be fair and just. Any deal imposed against the will of the Palestinians is inherently unjust and will not be accepted by them.

It has repeatedly been proven that the status of Jerusalem is not simply a Palestinian issue, but is also of keen and emotional interest to other Arabs, Muslims and supporters of peace around the world. The idea that forcing a solution down everyone’s throat will resolve the problem is unwise and will not work.