If Hamas and Israel were to sign a long-term cease-fire, the Gaza Strip could make use of a natural gas field in the Mediterranean, a highly educated population and wonderful beaches to become a pleasant place to live. 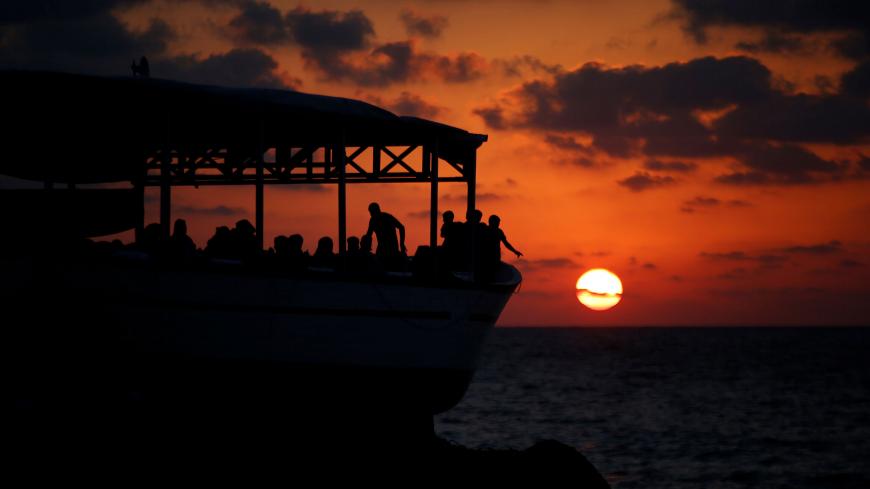 Palestinians are seen aboard the "Lolo Rose" ship, which has become a popular restaurant, during sunset on a beach in Gaza City, Gaza, July 31, 2017. - REUTERS/Mohammed Salem

It looks like everyone wants to do away with Gaza. In Israel, saying “Go to Gaza!” is the equivalent of “Go to hell!” The late Prime Minister Yitzhak Rabin, who was known for his off-the-cuff “witticisms,” once declared that he would like to see Gaza drown in the sea. Just like that, nothing more, nothing less. I also remember a conversation that then-opposition leader Shimon Peres and I had with Egyptian President Anwar Sadat in Vienna in July 1978. At that meeting, Sadat told us that Israeli Prime Minister Menachem Begin had offered to give Gaza to Egypt in exchange for the right to annex the town of Yamit in the Sinai. Sadat responded with his rolling, baritone laugh, “Begin thought I was stupid. I immediately told him, ‘You can keep that damned place for yourself.’”

It was inevitable that the violent incidents along the border between Gaza and Israel over the last two weekends did nothing to improve Gaza’s terrible image. Anyone who follows the most recent news from the Middle East might reach the mistaken conclusion that Gaza is nothing more than the source of black smoke billowing from burning tires and of wanton bloodshed. Anyone who has followed the news over the past few years will recall violent military confrontations, rocket fire and a humanitarian crisis. Even the Palestinian leadership treats Gaza as disposable, or as a liability much more than an asset. Anyone who really knows Gaza, however, would be hard-pressed to see it as such a wretched place. There are several reasons for this:

The Oslo Accord, which provides an outline for a solution to the Palestinian-Israeli conflict, determined that the West Bank and Gaza would constitute a single political entity and that whatever solution is found would apply to both. Upon being elected in 2001, however, Prime Minister Ariel Sharon showed no intention of fulfilling the agreements. He did not trust any Arabs, whether they were from the Palestine Liberation Organization (PLO) or Hamas. This he told me during a lengthy conversation in 2005, when I led Meretz.

Instead, Sharon decided to disengage from Gaza unilaterally and evacuate Israeli settlements there. No one had promised Sharon that by doing this, Israel would be released from its international obligations to deal with the issue of Gaza as part of a comprehensive agreement, which even the most right-wing governments in Jerusalem, including the current one, have never renounced.

The Palestinians and the rest of the world considered the 2005 disengagement from Gaza to be part of the implementation of the Oslo Accord’s agreement on an Israeli withdrawal in stages from the occupied territories. On the other hand, the Palestinians never considered the possibility of establishing a Palestinian state in Gaza or declaring Gaza to be sovereign Palestinian territory that would be integrated at some point in the future, with other territories that Israeli would withdraw from in the West Bank, even though Israel’s right-wing government would not prevent them from doing so.

Former US President George W. Bush, who saw himself as being committed to spreading democracy around the world, forced Sharon to allow Hamas to participate in the 2006 elections for the Palestinian Authority’s legislative assembly, in violation of the Israeli-Palestinian Interim Agreement signed in 1995. Accordingly, “The nomination of any candidates, parties, or coalitions … will be cancelled, if such candidates, parties or coalitions 1. Commit or advocate racism; or 2. Pursue the implementation of their aims by unlawful or non-democratic means.”

Hamas continued to support the use of violence and to call for the destruction of Israel. When Hamas surprised everyone by winning the elections, Israel and the international community had no idea how to handle this turn of events. Having failed to set preconditions for Hamas to participate in the elections, the international community instead ended up setting terms for Hamas to win recognition (renouncing terrorism, accepting international agreements signed by the PLO and recognizing Israel) after it had already won the election. Since Hamas never considered accepting those terms, the world (particularly the West) refused to recognize the movement, preferring instead to treat Mahmoud Abbas, elected Palestinian president a year earlier, as the sole legitimate Palestinian address.

From Hamas' perspective, the emergent situation was little more than a case of hypocrisy by the international community, which refused to accept the democratic choice of the Palestinian people. In June 2007, the organization used brute force to seize control of Gaza and ousted the Palestinian Authority. Ever since then, all efforts to reconcile the Palestinian establishment in Ramallah and the Hamas leadership in Gaza have come to naught. Since Egypt rightfully regards Hamas as an extension of the Muslim Brotherhood, and since Gaza is squeezed between Israel and Egypt and receives a cold shoulder from both countries, the Hamas leadership has been seeking ways to do away with the status quo and have the siege of Gaza lifted, without changing its policy toward Israel or agreements between Israel and the PLO.

The recent events along the Gaza border fence stem from the desire of Gaza’s residents to extricate themselves from the corner in which they are trapped. The problem will not be solved through violent encounters between Israeli snipers and young Palestinians willing to sacrifice their lives in vain. An iron fist might well be a temporary solution, but what is really needed is a solution for the long haul. There are two possible options.

The first option is a shift in attitude among Hamas' leadership regarding the use of violence. Such a shift could transform Hamas into a party to discussions on reaching peace with Israel, once Israel itself is willing to negotiate peace. The second option is immediate talks about arranging a “hudna,” a total cease-fire, for a specified number of years while finding a solution to the missiles in Hamas’ hands, but without the movement being forced to recognize Israel or past agreements.

A modest step such as these could be achieved with the help of an external player — for instance, Egypt or Russia. Several attempts at a hudna have been made in the past, so there is no reason not to renew them as soon as possible.