Despite having expertise in using nonlethal means to disperse violent demonstrations, the Israeli military chose to use live fire against demonstrators across the border in Gaza. 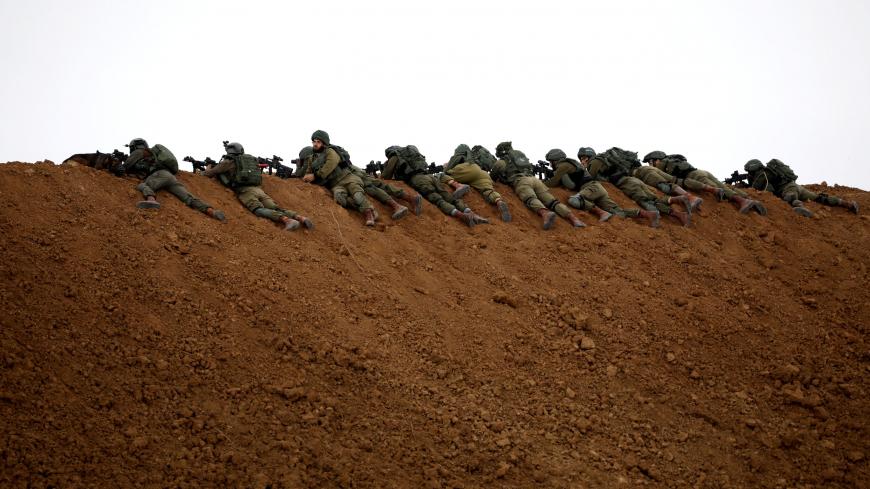 Israeli soldiers are seen next to the border fence on the Israeli side of the border with the northern Gaza Strip, Israel, March 30, 2018. - REUTERS/Amir Cohen

Hamas has conceded that five of at least 17 Palestinians killed by Israeli live fire at a demonstration along the border with Gaza on March 30 were members of the organization. Israel insists that 10 or 12 of those killed were “terrorists.” Even if one accepts the Israeli version, that still leaves five unarmed civilians shot to death by the Israel Defense Forces (IDF), with more likely to come. Gaza’s Hamas rulers have already declared that the bloodshed would not disrupt the events they dub the Great Return March, scheduled to run until May 15, when Palestinians mark Nakba Day, the “catastrophe” of Israel’s establishment in 1948.

Prior to the protest, IDF senior officers had told Haaretz that a high number of casualties was a “price we would be willing to pay to prevent a breach” of the border fence. Even after the clashes, the IDF continues to insist that it will not change its rules of engagement regarding Gaza protesters. Meanwhile, the Israeli government is unimpressed by the urgent UN Security Council session convened March 31 to discuss the deadly results and by the condemnations issued in world capitals.

While Gaza was burying its dead, Israeli news media were busy reporting on the masses celebrating the weeklong Passover holiday at the country’s parks and beaches. The few Israelis who questioned the need for live fire against civilians, such as Meretz Chair Tamar Zandberg and radio host Kobi Meidan, came under a different type of live fire by Defense Minister Avigdor Liberman. Prime Minister Benjamin Netanyahu unleashed a barrage against Turkish President Recep Tayyip Erdogan, who dared condemn the killing of civilians in Gaza. The same Netanyahu had five years earlier apologized to the Turkish people for the killing of nine Turkish civilians who took part in a May 2010 humanitarian flotilla bound for Gaza. Netanyahu told Erdogan at the time that the tragic results of the incident, during which Israeli commandoes boarded the Mavi Marmara to block its arrival in Gaza, were unintentional and admitted that the Israeli investigation had uncovered several operational errors.

Were the tragic results of the Passover 2018 incident unintentional as well? Is the most sophisticated military in the Middle East — adept at locating and destroying nuclear facilities far from its borders — really unable to defend its borders without shooting civilians? Does a defense industry that rakes in billions of dollars from the export of nonlethal crowd dispersal equipment not make it available to the Israeli security forces? If it does, did the commanders in the field exhaust such riot control measures before ordering the snipers to fire? One such crowd management weapon is an infrasonic device that emits inaudible ear-piercing frequencies. Israel used it to disperse a 2011 demonstration by Palestinians in the West Bank without incurring casualties. A senior official described the device as “a highly effective nonlethal means that uses frequencies humans cannot bear for long, is very easy to operate and doesn’t cause long-term damage.”

Israel has handled numerous protests, some violent, in its 70-year history, including by ultra-Orthodox Jews, social activists, people with disabilities, settlers and others. Major transportation arteries were blocked, the gates to the Knesset were stormed and police officers were injured. Only the October 2000 rioting in the Galilee and central Israel resulted in civilian deaths. All 13 victims shot dead by Israeli snipers were Arabs — 12 Israeli citizens and one Palestinian. Those clashes also occurred in the midst of an Israeli holiday celebration — Rosh Hashanah, the Jewish New Year.

At that time in 2000, I remember calling the home of Shlomo Ben-Ami, then minister of public security in the Labor-led government of Ehud Barak, to ask about the conduct of the police. “I cannot allow main traffic arteries to be blocked during the holiday,” he told me. That explanation did not satisfy members of the Or Commission, established by the government to investigate the deadly events. Its report concluded that authorities had failed to impress on the police the need to avoid casualties among the rioters to the extent possible and disqualified Ben-Ami from serving as minister of public security.

In a special report about the Mavi Marmara affair, issued in 2012 by the state comptroller, the government watchdog wrote that the decision-making process had been flawed, discussions leading up to it were hastily conducted and superficial, and no preparations were made for the worst-case scenario of a violent clash with flotilla participants. The comptroller noted that although Netanyahu understood the highly unusual nature of the flotilla affair and was personally involved in preparing for it, he underestimated the threat of deaths and injuries should Israel forcibly act to halt the protest.

Prior to last week’s clashes on the Gaza border, Israeli security officials had warned of deaths and injuries if Palestinian protesters stormed the fence. Members of the government’s Defense and Foreign Affairs Cabinet were warned repeatedly over the past year that Hamas would exploit the growing despair among Gaza’s 2 million residents to foment action against Israel. Netanyahu preferred to deploy snipers along the border. Minister of Transportation and Intelligence Affairs Yisrael Katz has been trying for several years to push through construction of an island seaport off the Gaza coast to provide residents with controlled humanitarian and commercial access to the outside world, without risking Israel’s security.

Has the prime minister not realized that forcibly keeping the lid on the pressure cooker that is the world’s most crowded piece of land will lead to the deaths of more and more civilians? Does he lose sleep over civilian deaths?

As far as the leadership of the opposition goes, Netanyahu can rest assured. The only thing Zionist Camp Chair Yoel Hasson had to say about the killing of civilians across the border fence was, “There’s nothing to investigate and nothing to examine; the IDF is doing what needs doing to protect Israel’s Gaza border communities.” He tweeted his comments in response to Zandberg’s call for an inquiry into the shooting of civilians. In addition, Netanyahu will always have Yair Lapid, the chair of the centrist opposition Yesh Atid and the self-appointed foreign minister who goes around the world saying that all the Palestinians have to do for Israel to lift its blockade is “to stop trying to kill Jews.”