Desperate Gaza residents are so poor, hungry and desperate that they no longer fear demonstrating against powerful Hamas. 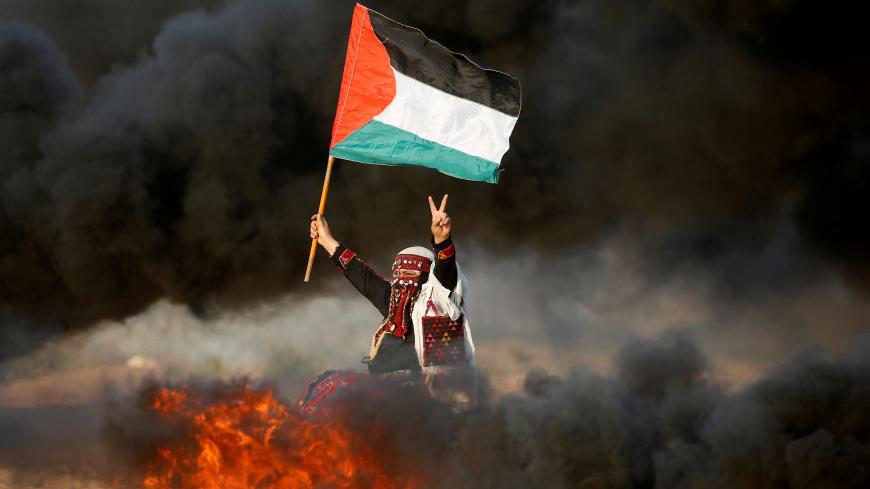 A woman waves a Palestinian flag during a protest calling for lifting the Israeli blockade on Gaza and demanding the right to return to their homeland, at the Israel-Gaza border fence east of Gaza City, Sept. 28, 2018. - REUTERS/Mohammed Salem

Violent demonstrations along the border fence with Israel in recent days took yet another heavy toll on residents of the Gaza Strip. On Sept. 29, Israel troops fired at thousands of protesters who massed along the fence, killing seven Palestinians — among them a 12-year-old boy. Palestinians hurled a large number of grenades and other explosive devices at Israeli soldiers.

Israeli and international media reporting on such incidents generally focus on the number of Palestinian casualties, on assessments by senior defense officials regarding Hamas motives in increasing the frequency of the anti-Israel demonstrations, and — according to the Israel Defense Forces (IDF) spokesperson — on the number of protesters who heeded Hamas' calls to clash with Israeli troops at the border fence.

Those following the weekly events in Gaza since the US Embassy moved from Tel Aviv to Jerusalem in mid-May might think that all 2 million Gaza Strip residents had mobilized for the campaign against Israel. Hamas' leadership has reinforced this impression by pitching the demonstrations as “popular protests” and appearing to focus international public opinion with great success on events in Gaza and on Israel’s 11-year siege of the enclave.

However, virtually all Israeli and international media outlets were unaware of other protests in recent weeks that were generated by opponents of Gaza’s Hamas rulers. One of the main reasons for this lack of publication is that Palestinian media in the Strip does not dare publish “the banned things” to which almost every Gaza resident has been exposed in recent weeks.

What are these “banned things”? They are the underground activities taking place alongside the public protests against Israel while residents openly and almost fearlessly express themselves against Hamas. They are protesting against the terrible reality imposed on them by Hamas since it took control of Gaza by force in 2007.

Al-Monitor has learned that dozens of Palestinians demonstrated in recent weeks in the Khan Yunis refugee camp and the adjacent Abasan neighborhood. They called on Hamas to take care of its people or “disappear” — a few waved signs against what they termed Gaza’s “dictatorial regime.” Similar protests took place some two weeks ago in the Shabura camp in the southern Gaza town of Rafah and in the northern Gaza refugee camp Jabalia. Some protests turned into altercations between Hamas supporters and protesters. The latter claimed Gaza’s rulers had taken the Strip back to the Middle Ages; supporters accused the demonstrators of treason and aiding the Zionist enemy.

Tensions between Hamas supporters and opponents have intensified following the US decision announced Sept. 1 to stop funding the United Nations Relief and Works Agency (UNRWA) and uncertainty over the future of the organization that provides food and schooling for hundreds of thousands of Palestinians. Protests against the aid agency erupted around UNRWA compounds in southern and northern Gaza, and threats were made against the lives of senior agency officials. Mass clashes broke out between Hamas supporters and opponents over who was responsible for this state of affairs.

The demonstrators accused leading Hamas officials and activists of corruption and of favoring the core of their supporters over the general population — most of which is unemployed and demoralized from counting its unbelievable number of dead and injured every week.

The scope of these protests is small, but they echo the January 2017 protests over the power blackouts crisis in the Gaza Strip, which were violently suppressed at the time by Hamas security forces.

A Khan Yunis resident told Al-Monitor Oct. 2 that the protests in the southern refugee camp began about a month ago. At first, dozens of Palestinians held a spontaneous protest after Friday prayers, parallel to the weekly demonstrations along the fence with Israel. The number of protesters grew to several hundred in the ensuing days. “The barrier of fear has been shattered; we are going to die in any case, so what does it matter if we die of hunger or war or as a result of shooting or blows by Hamas?” the Palestinian asked, speaking on condition of anonymity. The protesters, he said, are not a small group of dissatisfied residents; rather, they are the majority of the refugee camp denizens who feel Hamas has brought them to the brink. Sadly, he adds, not everyone is willing to take a risk by demonstrating. “If there had been more [protesters] like there were in Egypt, we would have more confidence against them [Hamas]. What will they do? Shoot us all? Hamas knows that eventually many others will join the protests because people will realize that even though they’re still afraid, they have no choice. Hunger will force them to get up and demonstrate. All is lost, life is ending and we are dying.” He repeated the word “dying” many times during the conversation.

When I asked to speak with other Khan Yunis residents, the man put me in touch with his neighbor at the camp, who then agreed to be identified only by the letter "Y". Y is 30 years old and the father of five young children; the youngest of them is 2 years old. “They [Hamas] take care of their own people who are given work and food and gifts,” he told Al-Monitor. “They even share electricity generators among themselves while the people are being crushed by the terrible burden. We were supporters of Fatah [the larger rival Palestinian movement], but today there is no more Fatah [in Gaza] and there is nothing. There are only those in favor of Hamas and those who are against it. They send people to die while the commanders [Hamas leaders] enjoy power supplies and luxuries. As far as they are concerned, anyone who opposes them can die. The people have had enough.”

Y says Hamas security forces did not intervene in the protests at the camp, but Hamas supporters swore at the protesters and accused them of treason and support for “the Zionists,” in his words. “Each of the families has at least one son who works for Hamas and gets paid by Hamas,” he says. “They guard their jobs and that’s what they care about — protecting themselves.”

The conversations with the camp residents took place on Facebook where they say they feel safer to speak. Asked why they were afraid to speak by phone with a journalist but were not afraid to protest and issue public calls against Hamas, they answered that speaking with a Jewish journalist could be considered an act of treason or espionage — both punishable by death.

An Israeli security source speaking on condition of anonymity confirmed that pockets of popular resistance against the Hamas leadership had developed in recent weeks. The economic pressure, lack of hope of conciliation with Fatah and especially the large number of Palestinian casualties on the border have generated opposition among the weakest groups in Gaza — those living in the refugee camps. According to his assessment, this burgeoning protest is unlikely to develop into a mass insurrection that will bring down Hamas. “The Palestinians in Gaza are tired, exhausted and hungry. In Egypt, the army protected residents. In Gaza, the ‘Hamas army’ will not hesitate to use live fire against protesters. Gaza is not Egypt, and Palestine Square is not Tahrir Square.”