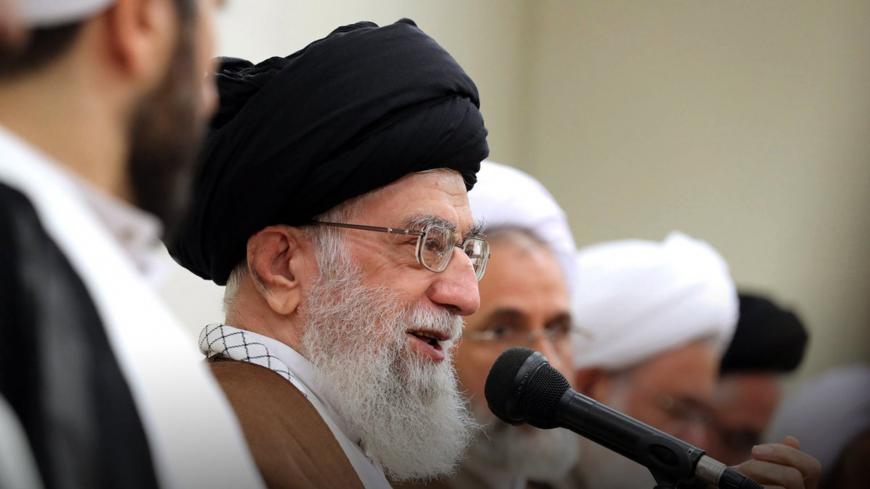 Iran's Supreme Leader Ayatollah Ali Khamenei speaks at a meeting with organizers of a congress on the Quran and humanities. Posted Dec. 1, 2017. - Twitter/@khamenei_ir

A group of 300 conservative figures in Iran wrote an open letter to Supreme Leader Ayatollah Ali Khamenei asking for structural reforms for the country. The letter, which was published on various Telegram channels, was billed as an open letter from “officials of revolutionary organizations and student activists … about existing concerns regarding the state of the Islamic Republic and the need for fundamental reforms.” The letter is rare given that calls for reform addressed directly to the supreme leader typically do not come from the right but from Reformist figures or groups.

The letter stated that while these groups of activists have written about the state of the country regarding their concerns, they have never written to Khamenei directly. However, in accordance with their view, “day by day the government is resembling a lifeless body and breaking from within … and in consideration that the country needs structural and fundamental reforms … and no other official has the discretion,” they decided it was time to address Khamenei directly.

The letter then criticized the different branches of government. Regarding the president’s powers, the letter said that they have been decreased and — given the situation of “engineered elections” (a criticism of the Guardian Council that vets candidates for the elections) and people having to choose between “bad and worse” during the elections — people do not see the administration as a part of them but rather standing against them. On Iran’s parliament, the letter said that parliamentarians are elected by spending vast amounts of money and lobbying and through conducting transactions with other government officials, and they are no longer “the people’s house” — as it is often referred to.

The letter referred to Iran’s judiciary as an organization that, instead of people seeking it out when their rights have been violated, has been turned into an “abusive and oppressive” institution. The letter said that the Assembly of Experts and Friday prayer leaders across the country have an important function to guide society, but these individuals themselves “are guided by others.” The letter also attacked “big economic groups” that were set up by the government to help out the poor but have failed in their duties.

One of the more startling aspects of the letter is that it directly criticized the Intelligence Organization of the Islamic Revolutionary Guard Corps (IRGC) for its influence in political, economic, judicial and cultural matters. It criticized the organization's “unaccountable budget” that has increased in the last several years. The Intelligence Organization of the IRGC operates under the supreme leader and has become in the last decade one of the most powerful and oppressive bodies under the Islamic Republic.

The letter was short on recommendations on how to address the problems. A more open environment for elections was one of the major recommendations. The letters were signed by those close to former President Mahmoud Ahmadinejad, who has been writing his own letters to the supreme leader and has been battling the judiciary over the imprisonment of his vice president over corruption charges.