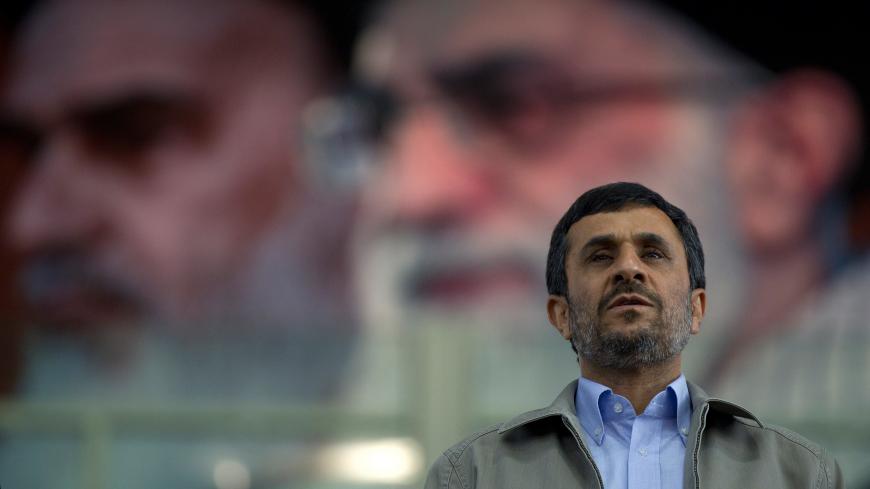 Former President Mahmoud Ahmadinejad, whose contested re-election plunged Iran into its largest street protests since the 1979 revolution, has written an open letter addressed to Supreme Leader Ayatollah Ali Khamenei calling for free elections. Ahmadinejad said the letter, published on his website Dolat-e Bahar on Feb. 21, was in response to a Feb. 18 speech by Khamenei in which the supreme leader discussed discontent among the public and shortcomings within government institutions and even welcomed criticism about himself.

Ahmadinejad made three recommendations for reform in the country. The first began, “Freedom and the exercise of self-determination is the fundamental right of people and one of the goals of the revolution, as directly stated in the constitution, and the Islamic system was set up to secure these rights.” He continued, “An immediate and free presidential and parliamentary election, without the engineering of the Guardian Council and the interference of military and security institutions, is an urgent need.”

The references to Guardian Council engineering and security organizations' interference are among the most controversial points in the letter. The Guardian Council is a 12-member body that vets candidates for elections and laws passed by parliament. The council is in essence a gatekeeper that ensures that all the candidates who run in elections are sufficiently loyal to the status quo. The Guardian Council has historically sought to keep elections tame and has attempted, though not always successfully, to prevent those who want to challenge the system from running.

Guardian Council spokesman Abbas Kadkhodaei responded to Ahmadinejad’s letter by accusing the former president of attempting “engineering” in the 2009 elections by pressuring the council to announce final results before the watchdog body had fully reviewed complaints from losing candidates.

The attack on the Guardian Council is also an indirect attack on Khamenei. Khamenei chooses six members of the council, while the six others are elected by parliament from nominees chosen by the head of the judiciary, whom Khamenei appoints directly. Therefore, all paths to the Guardian Council have Khamenei’s blessing, directly or indirectly.

The reference to security organizations is also controversial given that Ahmadinejad’s re-election in 2009 was marred by the intervention of the Islamic Revolutionary Guard Corps and the Basij Organization. Hundreds were arrested in the aftermath of Ahmadinejad's election and dozens were killed in the ensuing protests.

Ahmadinejad’s second recommendation was for the removal of the head of the judiciary, Ayatollah Sadegh Larijani. Referencing Khamenei’s Feb. 18 speech in which the supreme leader discussed shortcomings in the administration of justice, Ahmadinejad said that a judiciary chief must be “independent and approved by the people.” However, Ahmadinejad’s criticism of the judiciary, while it has validity, is also self-serving. A number of former officials from his administration have been sentenced for corruption and his former vice president, Hamid Baghaei, currently has a corruption case in an appellate court hanging over his head. A new judiciary chief could alleviate the legal troubles for Ahmadinejad's former team; this, however, is not considered likely.

Ahmadinejad’s third recommendation was that Khamenei pardon and free all those who are in prison for criticism.

After leaving office, Ahmadinejad has not been quiet, and has sought on numerous occasions to question the entire system. Khamenei had staunchly supported Ahmadinejad, and at one point the supreme leader said that when it came to the 2009 presidential candidates, his views were closest to Ahmadinejad’s. Recently, however, the supreme leader indirectly criticized the ex-president by suggesting Ahmadinejad was acting as if he were an opposition figure and not a former official of the country. Given Khamenei’s strong previous support of Ahmadinejad and that the latest letter was addressed directly to the supreme leader, Khamenei likely will eventually be forced to respond either in words or actions.