Iran’s former president appears to target the judiciary chief and the parliament speaker in a bid to regain political relevance. 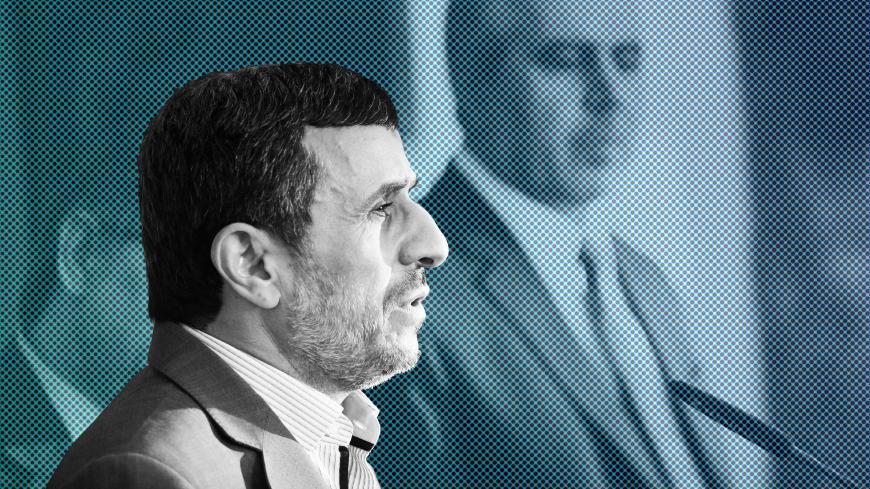 Once again, Iran’s former President Mahmoud Ahmadinejad has made headlines following his controversial remarks targeting judiciary chief Ayatollah Sadegh Amoli Larijani and his brother, parliament Speaker Ali Larijani. The war of words illustrates yet again Ahmadinejad’s typical strategy, which is to attack influential political families to gain more popularity with the public. Thus, his latest attacks on the Larijani clan can be viewed as a new chapter in the activities of a man whose political life relies on attacking others.

Several figures close to the former president have either been convicted or are facing pending trials over financial corruption charges. Ahmadinejad, however, claims the judiciary is using politics to pressure him and his allies. In an open letter dated Oct. 26, he criticized the summoning of his former deputy Hamid Baghaei and the legal procedure against Baghaei, accusing judiciary officials of using their powers as a “tool at the service of their personal ends.” Baghaei was Ahmadinejad's deputy from 2011-13; Ahmadinejad was president from 2005-13.

The letter was not the first time Ahmadinejad criticized the judiciary. In a previous letter addressed to Ayatollah Larijani on Sept. 25, Ahmadinejad wrote, “Your brother [Ali Larijani] is planning to run in the 2021 presidential elections, and he apparently sees me as the main obstacle in this path. Why should we [Ahmadinejad and his associates] be the victims of his political agenda?”

Meanwhile, in a video posted on his unofficial website Dolat-e Bahar on Nov. 16, Ahmadinejad unleashed his harshest criticisms against Iran’s judiciary as well as the legislature. In the clip, Ahmadinejad openly accused the Larijani brothers of having colluded to topple his administration during his second term as president. In another part of the same video, he claimed that the 2011 attack on the British Embassy in Tehran had taken place with Britain’s knowledge and with the cooperation of some elements within Iran.

But Ahmadinejad’s political show did not end there. Being an expert in public relations, the former president and his allies resorted to the age-old tactic of taking refuge in a holy shrine by staging a sit-in at the Shah Abdol-Azim shrine in southern Tehran. This centuries-old form of protest dates to the Qajar era (1799-1925) and was especially used by the clergy during the time of Persian King Naser al-Din Shah Qajar (1848-1896) to defend their rights and force the powers that be to provide incentives to religious sites. Baghaei began his sit-in Nov. 15, with Ahmadinejad and Esfandiar Rahim Mashaei, the former president’s chief of staff, joining the day after.

But what was Ahmadinejad’s goal with this political hoopla? A look at his history in politics shows that he is a man who obtains significance by attacking bigger and more powerful political figures. For example, during the second administration (1993-97) of President Ali Akbar Hashemi Rafsanjani, Ahmadinejad served as one of Rafsanjani’s governors. He even appeared on the same electoral list as Rafsanjani in the February 2000 parliamentary elections. However, over time Ahmadinejad realized that to succeed, he needed to attack Rafsanjani. Thus, in the 2005 and especially 2009 presidential elections, he tried to achieve this goal by targeting Rafsanjani and his children. By making accusations of nepotism and corruption during the presidential debates in 2009, Ahmadinejad portrayed himself as an innocent yet courageous individual who was able to challenge Rafsanjani for the first time.

This approach gained him considerable admiration, especially among the lower classes of Iranian society. At the same time, he tried to instill a belief in society that his presence on the political stage had created fear in the established centers of power and wealth.

After Rafsanjani died in January of this year, Ahmadinejad turned his focus to the Larijanis and tried to use the same strategy. Thus, it did not come as a surprise when on Nov. 15, during a speech at the Shah Abdol-Azim shrine, Ahmadinejad said, “We are against the Larijani family. ... We don’t want the country to fall into their hands. ... [They] pressure people and bow to foreigners.”

Ahmadinejad’s emphasis on the Larijani family and not just the judiciary chief or the parliament speaker stems from his old strategy of attempting to target a specific political family and holding it responsible for the ills of society. It seems that for now Ahmadinejad has no intentions of leaving this path, perhaps realizing that it is likely his only ticket to renewed political relevance. As such, the former president is continuing to portray himself as a victim who, along with the public, plans to fight against the established and powerful families in Iranian politics.

Indeed, in another video posted on Dolat-e Bahar on Nov. 23, Ahmadinejad intensified his attacks on the Larijanis. He also accused the judiciary of injustice, claiming it was pressuring him and his allies due to personal animosities.

This is while Baghaei himself had earlier accepted that in the final days of Ahmadinejad’s second administration, on Aug. 3, 2013, he had withdrawn some $4.8 million from government funds to assist Ahmadinejad’s project to establish a university. It should be noted that this sum was later returned to the treasury upon being pursued by the government of President Hassan Rouhani.

Corruption allegations against Ahmadinejad’s allies continue to grow, with more revelations of wrongdoing dating to Ahmadinejad's eight years as president being released. But as always, the former president continues to play offense, throwing the ball into his rivals’ court.

In his latest endeavor, Ahmadinejad on Nov. 28 wrote an open letter to Supreme Leader Ayatollah Ali Khamenei in which Ahmadinejad criticized Rouhani and his government. Ahmadinejad also argued that Iranian society was not in a favorable situation and that ordinary citizens had expressed their dissatisfaction following face-to-face meetings with Rouhani, adding that people had lost faith in the judiciary.

Ultimately, Ahmadinejad’s political maneuvers should come as no surprise. To him, the game is the same. Only the players have changed. The Rafsanjanis of yesterday have simply turned into the Larijanis.