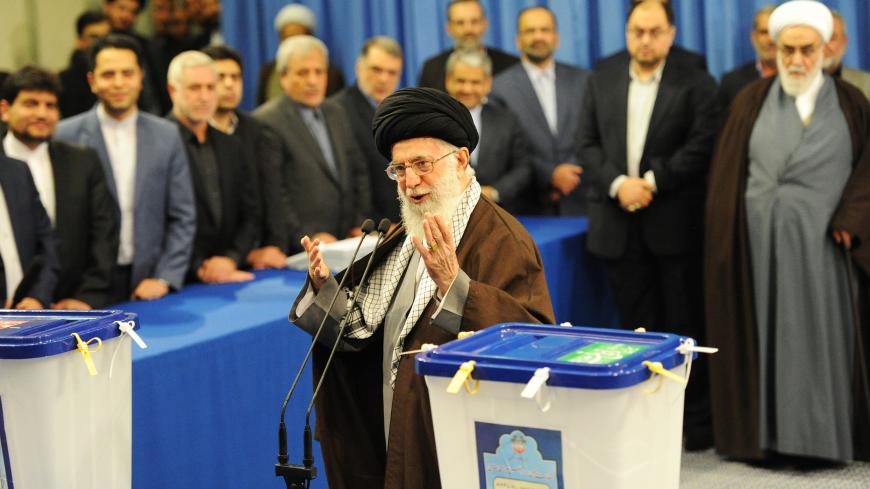 In recent months, Ahmadinejad and conservative Amoli Larijani have been accusing each other of various things. Ahmadinejad has indirectly alleged that the daughter of Larijani is spying for foreign intelligence services. He has also been releasing videos calling for Amoli Larijani's resignation.

It should be noted that following Khamenei’s public “advice” to Ahmadinejad not to run in the May 2017 presidential election, he defied it and decided to register as a candidate anyway. He was ultimately disqualified by the Guardian Council, which is tasked with vetting candidates. After this incident, tensions between the former president and the Iranian political establishment gradually rose.

In a meeting with members of the Council of Coordination on Islamic Propagation on Dec. 27, Khamenei addressed Ahmadinejad indirectly, saying, “Those who had all the country’s facilities under their control and those who had the countries’ management facilities under their control aren’t entitled to play the role of opposition and talk against the country; rather, they should be responsive [now].”

He added, “Besides their services [to the country], there has been damage [done to the country by them]; [they should be thanked for their] services, and the damages should be criticized fairly, responsibly and wisely. [Although] the criticism shouldn’t be done with cursing and slandering. Criticizing and accepting criticism is necessary, but slandering and [unfair attacks] are forbidden.”

Referring to Ahmadinejad’s recent harsh criticisms against the judiciary and its chief, the Iranian leader continued, “It is not considered an art if a person repeatedly slanders and attacks various entities and organizations, because every child can throw a rock at a window to break it. The art is to take God into account and speak logically, and [to] avoid speaking for personal [interests] and attaining power … because God will question humans for every word [they utter].”

Khamenei spoke about the mounting hostility between Tehran and Washington. “Our main enemy, the US regime, rules one of the most corrupt and most oppressive countries. It supports terrorists. According to reports, it's still supporting Daesh [Islamic State] and others like them. The US government supports the cruel Saudi king in his crimes against Yemen, and it supports the Zionist regime in its crimes against Palestine.”

He added, ”[Ronald] Reagan was both wiser and more powerful than [Donald] Trump. Reagan’s administration took measures against Iran; they shot down one of our passenger aircraft. But where is Reagan, and how powerful is the Islamic Republic now?” Khamenei said.

He added, “The US government is trying to divide Iran. It is also profiting from the help of some wealthy states in our region. They must know that we will advance, powerfully, with divine favor, just as we did when we defeated them in our region. Just as we rubbed their noses into the dirt, we will go forward with great power. With divine permission, we will disappoint the United States [and its ambitions] in all arenas.”