Moscow and its partners in Tehran and Ankara move to strengthen coordination on Syria as the Trump administration signals an intention to up the stakes. 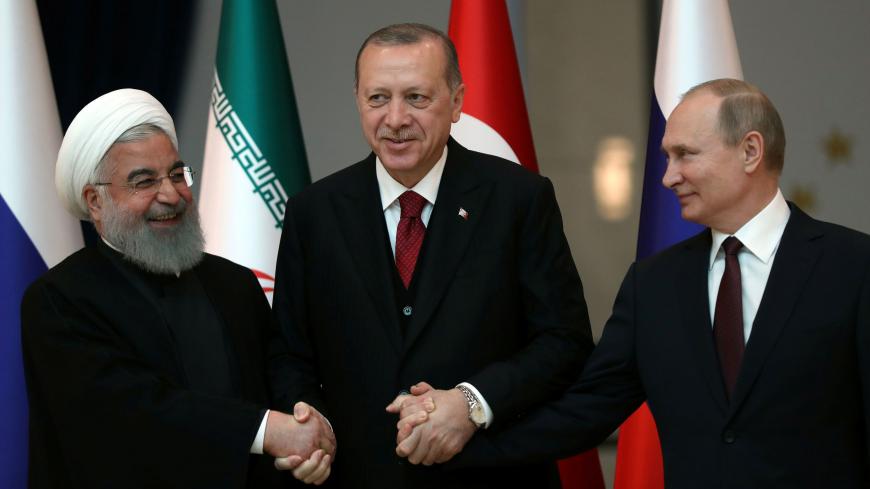 It wasn’t their chemistry that brought Russia, Iran and Turkey to the table over Syria. Rather it was the intersections of their interests, and as part of this, the common threat of having other powers, such as the United States, playing a role in crafting the future of Syria. Indeed, the trio sees the situation in the war-torn country as an extension of their own national security — each for a different reason, and each wanting to see the outcome of the conflict in line with their own interests. As such, for Russia, Iran and Turkey, there was no option but coming together on the basis of their minimum consensus to achieve their objectives.

On some occasions, like the recent US-led attack on Syria on April 13, Ankara was on a completely different page from its northern and eastern neighbors, siding with Washington and showing support for action that was seen by its partners in Moscow and Tehran as aggressive. At the time, Turkish President Recep Tayyip Erdogan said of the strikes, “The Syrian regime received the message that its massacres will not be left unanswered,” saying that he found the US-led move appropriate. Yet Erdogan was also critical that US-led attacks on Syria have been limited to responses to alleged chemical weapons use by the Syrian regime. The Turkish president notably alluded to Damascus' use of conventional arms, which kill many more people than chemical weapons.

Tehran and Moscow dealt with the Turkish stance in a cold manner, while Ankara showed a willingness to preserve the tripartite coordination despite the differences. Indeed, only hours after the April 13 attacks, Erdogan and his Russian counterpart Vladimir Putin were on the phone, agreeing to “maintain decisiveness to reduce tension on the ground in Syria and continue efforts for a political solution,” Turkey said in a statement. Yet a week later, on April 20, Russian Deputy Foreign Minister Sergei Ryabkov said in an interview with Deutsche Welle that Moscow was uncertain about how the situation in Syria will evolve in terms of the country maintaining its territorial integrity.

This positioning on the part of Russia was significant as it contradicted Moscow’s official stance, which has always stressed the importance of preserving Syria’s unity — ultimately raising questions about whether Russia is beginning to signal that it lacks the power to keep Syria in one piece, as it has vowed earlier, or whether it is ready to compromise on this point. This opened the door for the additional question of how Iran and Turkey regard such a position given their shared security concerns when it comes to the future of Syria. Turkey has always been wary of the prospect that Syrian Kurds might rule an independent or semi-independent entity, not to mention how a divided Syria could also limit Turkey’s presence in that part of the region. Iran shares similar concerns about the Kurds, though they are more related to any future attempt to create entities that might block its main objective in Syria, namely to keep the road to Lebanon open and to keep the Syrian regime in power to maintain its regional leverage.

Against this backdrop, it was clear that the trio needed to coordinate more closely among themselves in order to keep the Astana process alive. Thus the foreign ministers of Russia, Iran and Turkey gathered in Moscow last weekend. But the meeting was not only prompted by the need for closer consultations. US President Donald Trump’s urging of Arab states to have a military presence in Syria was another main concern that needed to be addressed.

"We agreed that attempts to split Syria on ethnic and religious grounds were totally unacceptable," Russian Foreign Minister Sergey Lavrov told reporters after meeting with his Iranian and Turkish counterparts, "We have stated that we will counter attempts to undermine our joint efforts and pointed out that the Astana process is stable," he said. "We will continue solving important tasks related to de-escalation, easing tensions and reducing the conflict potential. Cease-fire violations continue to happen but we have a mechanism to monitor them and we will seek to overcome this situation, particularly by strengthening trust among the parties ‘on the ground,’" Lavrov added.

Maintaining trust may indeed be characterized as a key objective — and achievement — for the trio, Iranian political analyst and university professor Emad Abshenas told Al-Monitor. “There are contradictions among the three parties, and each is trying to pursue their interests,” Abshenas said. “Still I believe there are common interests that compel them to keep talks ongoing to solve the conflict.” Abshenas explained that there are two main factors that are affecting attempts to reach a political solution in Syria, referring to “difficulties in reaching a full consensus among the three partners on the final status in Syria” and also “attempts by the coalition that bring together the United States, Israel and Saudi Arabia to [put a] hurdle [in the path of] the trio’s efforts.” As such, Abshenas added, “It’s clear that we are witnessing a power struggle between the backers of the Geneva process and those of the Astana process.”

Still, some believe that the coordination between Russia, Iran and Turkey does not have big chances of leading to the reaching of a final settlement in Syria. Turkey-based researcher Tamer Badawi told Al-Monitor that the trio could limit confrontation but not reach an accord. “The importance of this meeting is that these states might in the future be able to work on solving other regional issues,” he said. “It’s a framework for coordination but not for [reaching a] solution. Still it could help reach consensuses.”