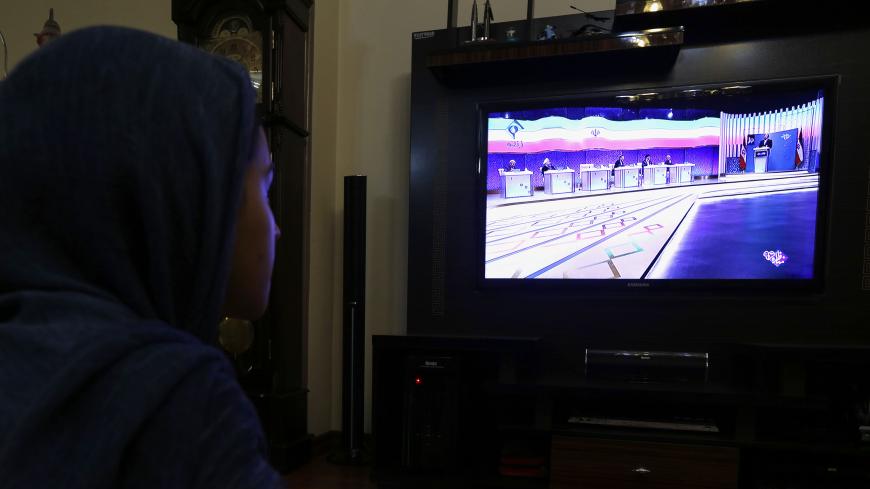 Censorship is nothing new for the Islamic Republic of Iran Broadcasting (IRIB), but particularly awkward editing has recently brought the state broadcaster international ridicule.

The censoring of sports events and movies is common on Iranian television. Iranian viewers have grown accustomed to shots of the audience being cut from live coverage of sports competitions. But IRIB made world headlines when it meddled with an Italian soccer club’s logo during its live coverage of UEFA Champions League soccer. While covering the April 4 quarter final game between AS Roma and FC Barcelona, IRIB producers decided to blur out a section of Roma's iconic logo of a she-wolf suckling twins.

The initial wave of reactions in the domestic Iranian media soon went global. Even AS Roma poked fun at Iranian state TV on Twitter April 5.

It was hardly the first time that IRIB has made headlines with its peculiar censorship methods. Female fans with outfits deemed un-Islamic have been cut from live volleyball coverage for years. The cuts are sometimes so frequent that viewers are left practically incapable of following games. These censorship practices have been a constant topic of criticism as well as jokes over Persian-language social media.

IRIB’s selective programming also has a security dimension, sparking street protests with controversial programming choices. "Kolah Ghermezi" is a popular children’s program that traditionally airs during Nowruz, the Iranian new year holiday season. One of this year’s episodes, which aired on March 22, introduced the traditional clothing worn in different regions of Iran with dolls representing the different ethnic minorities placed on various locations on a map of Iran. The doll used to represent the traditional clothing worn in the southwestern province of Khuzestan wore a dress belonging to the Bakhtiari tribe, with no reference to the attire of the province’s large ethnic Arab population. The show triggered a wave of street protests in Khuzestan, with ethnic Arabs demanding an apology from the state broadcaster for its lack of attention to their ethnicity and excluding them from the map. The protests began on March 27, five days after the show aired, and continued until March 31. The Arab media, especially the Saudi-owned Al-Arabiya, extensively covered the protests. Khuzestan resident Nima Noroozi tweeted March 29, “The stupid IRIB gives excuses to [Arab] separatists, and some [who think their honor has been offended] are fooled by their [the separatists] evil intentions.”

While Reformists in Iran have been critical of the IRIB management for years, the state broadcaster’s controversial practices have now even sparked reactions from Principlists. In a March 31 editorial, the conservative website Tabnak, which is close to former Islamic Revolutionary Guard Corps commander and Expediency Council Secretary Mohsen Rezaei, criticized IRIB'S approach as “divisive" and producing "neither the first nor the last" of such errors. But why does the Iranian state broadcaster create such trouble for itself and the entire Islamic Republic? The answer seems to be poor management making hasty decisions without considering the consequences.

In a Jan. 2 editorial, conservative journalist Mohammad Mohajeri wrote, “IRIB’s media literacy and quality of human resources and management are much lower than the average of other media outlets in the country. Thanks to the constitution, it has no real competition, as the facilities made available to all other media outlets in the country do not equal a tenth of what IRIB has.” He added that considering the legally enforced lack of competition, its poor quality should be no surprise.

The state broadcaster, which is critical of the moderate administration of President Hassan Rouhani and the Reformists, has long enjoyed this monopoly in Iran. However, with the expansion of access to mass media, satellite TV stations and the internet, this monopoly has begun to dissipate somewhat.

On April 22, the secretary of parliament's cultural commission announced that IRIB will become responsible for licensing and regulating radio and television online. Companies producing such material will reportedly have to pay half of their revenue to the state broadcaster, in effect enhancing IRIB’s monopoly since all online video content would need its permission. The move was immediately contested by Minister of Communications and Information Technology Mohammad Javad Azari Jahromi, who tweeted April 22, “This plan is a large obstacle” to content provision in the national information network. After the details of the plan surfaced, opposition to the move emerged within parliament. Member Mohammad Ali Vakili reportedly said April 23 that the cultural commission's decision will be contested.