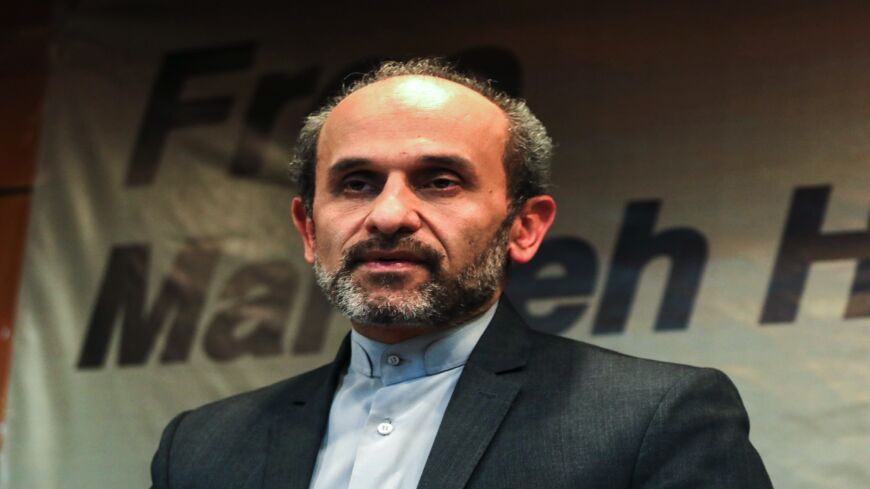 Peyman Jebelli, chief of the world service for the Islamic Republic of Iran Broadcasting (IRIB) and head of its 24-hour English- and French-language news network Press TV, speaks during a press conference in the capital Tehran on January 16, 2019. - ATTA KENARE/AFP via Getty Images

Jebelli, a 55-year-old communications graduate, hails from the Islamic Stability Front, the most unyielding faction of Iran's influential hard-line camp. Prior to the new promotion, Jebelli worked as the IRIB's World Service deputy, which also made him the head of the 24-hour English news network, Press TV.

Jebelli's tenure at Press TV was marked with deep controversy, particularly with the channel’s contentious coverage of the talks over the restoration of the Iran nuclear deal, which were held in six rounds in Vienna during moderate President Hassan Rouhani's term.

Jebelli's team at Press TV repeatedly broke news from an anonymous "informed source" that would often contradict the positive narrative officially put out by the Iranian negotiating team. Press TV's approach even drew a rare reaction from Abbas Araghchi, the then deputy foreign minister and leading negotiator. “I don't know who the 'informed source' of Press TV in Vienna is, but s/he is certainly not 'informed,'” he tweeted. Jebelli’s team, however, dismissed allegations that they were leading a propaganda campaign to torpedo or postpone a potential deal between Tehran and Washington.

As a public organization with over 30,000 staff members and a massive network of some 50 television and radio stations, the IRIB has enjoyed an unequivocal, state-granted monopoly, taking advantage of Iran’s noncompetitive media market where private televisions are denied permits to operate.

The bulky organization controlled by the supreme leader’s office is facing criticism that it has failed to represent the entirety of the Iranian nation. Independent journalists and members of the public have brought to light biased overage, censorship and one-sided ideological content, which have for long characterized the organization’s editorial. But shrugging off widespread criticism, the IRIB has since the 1979 revolution served as a platform for intelligence agencies by broadcasting confessions coerced from political prisoners, a practice that remains in place full force.

In the past decade, the IRIB’s output and workforce have also been increasingly decided by the Islamic Revolutionary Guard Corps (IRGC) and its powerful intelligence branch. As an unwritten law, the agency is the unquestionable, trustworthy source to Khamenei for almost all key appointments and dismissals.

Deviation from policy lines or refusal to submit to the command of the IRGC could cost any IRIB chief their job and lead to their disappearance off the political scene. In 2014, the newly appointed CEO, Mohammad Sarafraz, initiated a far-reaching clampdown on corruption, removing over 750 managerial positions that he deemed redundant in one of the most ambitious downsizing projects ever within the organization.

Nevertheless, Sarafraz’s battle against the "mafia" (his own words) pitted him against the IRGC. The man who appeared to have underestimated the IRGC's influence failed to fight it off to the end. Only 15 months into his five-year mandate, he was relieved of his duties to become the only IRIB chief ever leaving the post before the official end of his tenure.

Now with Jebelli appointed to the position, the IRGC and Khamenei's office appear to have dodged the headache. A man from their very own tribe could be implementing the agenda flawlessly to allow for a tighter IRGC grip on power.

Jebelli has had a stormy start. Even within the already conservative organization, under his directives, purges are being carried out against staff members who are seen as strangers to the new hard-line and “revolutionary” agenda. That means several senior managers have been demoted and replaced by those closer to the IRGC and the hard-line Stability Front.

By the acknowledgment of many in the Iranian political elite, the insurmountable challenge the large institution is currently facing is a crisis of its own making: audience trust deficit. Decades of one-sided coverage have gradually pushed the Iranian viewers toward other platforms, where they seek to be fed with impartial coverage and material that prioritize public interest rather than promote a certain political ideology.

“Our broadcaster is but our disgrace” is a common slogan many Iranians keep chanting during protest rallies or other public events, where IRIB media crews show up. While the new CEO has promised change in content and editorial, it might take months if not years for him to repair the image and restore the Iranian public’s trust.

Given Jebelli's affinity with the most hard-line sectors of the political spectrum, his promised change — according to critics — may do little to bridge the gap between the public and the IRIB. The replacements and new policies, which have openly been hailed by the IRGC, are already sending the message that the broadcaster could be effectively turning into the IRGC’s media wing.