Russia seeks to extend role in Mideast peace beyond Syria

Moscow faces many challenges in its efforts to help resolve Palestinian issues, especially as Israel rejects any mediator other than the United States and Egypt continues to be the sole sponsor of intra-Palestinian reconciliation. 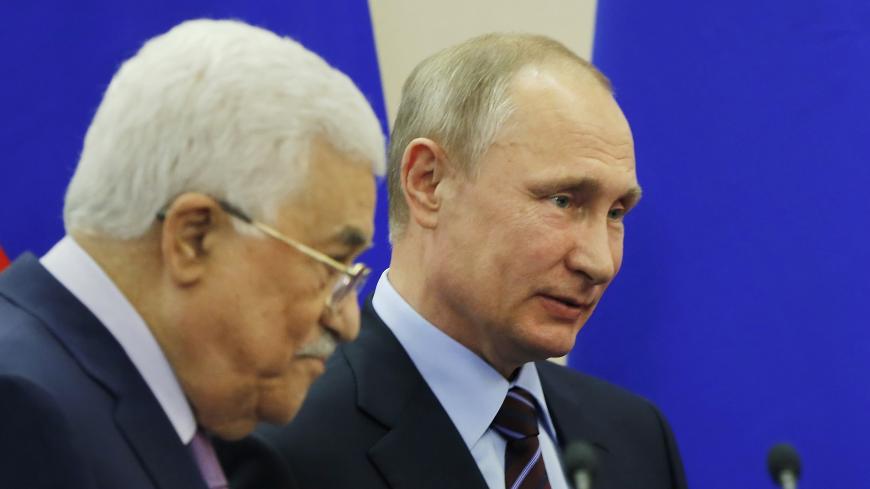 Russia’s Foreign Ministry is calling on Palestinians and Israelis to show restraint with each other and has rejected Israel’s “indiscriminate use of force against the civilian population” during Palestinian protest marches near the Israel-Gaza border. Russia is demanding that both sides avoid taking rash steps that would inflame tension, as more marches are expected.

Currently, Russia seems focused on achieving an intra-Palestinian reconciliation between rivals Hamas and Fatah. Conflict between the two main Palestinian political parties split the PA in 2007.

Abbas, who leads Fatah, visited Russia in February to brief Putin about developments in the Palestinian cause, particularly since US President Donald Trump announced in December that the United States recognizes Jerusalem as Israel's capital and will relocate its embassy in Israel to Jerusalem. Palestinians consider the eastern part of the city to be their capital.

In March, a Hamas delegation led by its political bureau member Mousa Abu Marzouk arrived in Moscow to discuss the future of reconciliation, how to counter US policy in the Middle East and Russia's role in the region.

Raed Enairat, a political science professor at An-Najah National University in Nablus and the head of the Contemporary Center for Studies and Policy Analysis, told Al-Monitor, “Palestinians believe Russia is striving in competition with the US in the Palestinian dossier by resorting to powerful political tools in the region. Most notable is Moscow’s alliance with regional powers that are at odds with Washington, particularly Iran and Turkey."

Russia's political and military achievements in Syria have encouraged Moscow to extend its efforts in the Middle East, he said. "When it comes to internal Palestinian relations, Russia is [trying] to bring Hamas and Fatah closer to each other but doesn't have a magic wand to achieve the desired reconciliation.”

Palestinians perceive Russia to be a great power with major importance in international decision-making and a UN Security Council member whose opinion is influential. They believe Russia could bring some balance to the US bias toward Israel. They are convinced Israel opposes any party’s participation in a rapprochement effort, other than the United States, that upholds the Israeli stance toward talks.

Basem Naim, the head of the Council on International Relations in the Gaza Strip and former minister of health in the Hamas government, told Al-Monitor, “Russia has a particular stance when it comes to dealing with Hamas. It perceives [Hamas] to be a political and national liberation movement. Moscow does not label Hamas as terrorists and could be thinking that its relation with Hamas could breed political gains and [provide] a strong [presence] in regional and international arenas. The Russians listen carefully to Hamas." However, Russia's role in any reconciliation between Fatah and Hamas could be restricted, "given that Egypt continues to have full control over the process.”

Hamas perhaps hopes Russia will pressure Abbas to seriously and practically approach reconciliation as a partner in the process. Hamas appears to be counting on Russia to assume a greater role in the Middle East and in mapping out the Palestinian future. Hamas isn't hiding its relationship with Russia, which serves the group's agenda and could bring international recognition that Hamas hopes will be reflected in palpable political support to counter the US-Israeli policy.

Fatah also supports a greater role for Russia in the Middle East. However, Abdullah Abdullah, the chairman of the Palestinian Legislative Council's Political Affairs Committee and a member of Fatah’s Revolutionary Council, agrees with Naim's assessment that Moscow's efforts in the Palestinian reconciliation "may not be fruitful, given the exclusive Egyptian sponsorship," he told Al-Monitor.

"I don't think Egypt will give up this dossier," he added.

Speaking to Al-Monitor, a close associate to Abbas who declined to be named said, “Abbas insists that Russia assumes a pivotal role in the peace process — particularly following Trump’s decision to recognize Jerusalem to be the capital of Israel and to move the US Embassy there, and [because of] escalated Israeli military measures in the Palestinian territories. Such events have encouraged Palestinians to communicate with Russia as an impartial mediator and alternative for the US in the peace process. This is because Palestinians believe that Washington's bias toward Israel has harmed US credibility.”

But even as Palestinians welcome Russia's willingness to help resolve Middle East issues, they fear Moscow's role will probably be limited to hosting political delegations and issuing diplomatic statements that are unlikely to be implemented on the ground.