A competition organized by the British Council shows that young Egyptian women neither shy away from science nor think it is a man’s domain. 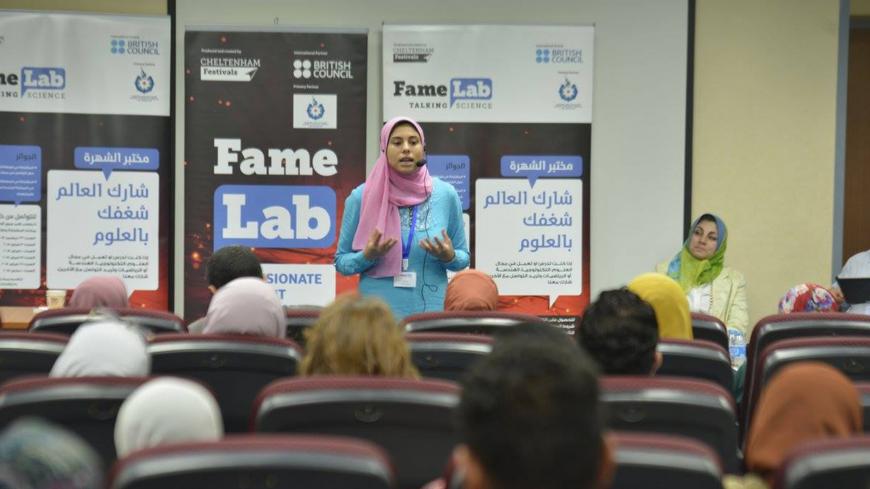 A competitor at FameLab Egypt gives a talk to the audience, Cairo, Egypt. Posted March 13, 2018. - Facebook/FameLabEgypt

Esraa Diab stood confidently in her niqab, or full face veil, on the stage at the Egyptian Museum in Cairo and explained to the audience what causes pain in a scientific yet simple language, drawing applause at the end of the speech.

Diab was a competitor at FameLab Egypt 2018, a major science competition sponsored by the British Council and Egypt’s Academy of Scientific Research and Technology. The aim of the competition is to get young scientists and researchers to talk about complicated scientific concepts in a simplified, accessible manner, thus bridging the gap between scientists and the public. While the top contenders have been women over the last three years, this year, on April 14, Hassam Abdel ElHay received the top prize of 5,000 British pounds ($7,150) and a trip to the United Kingdom to participate in the international contest and a workshop. Yasmine Maher won the student prize.

Diab drew attention to the growing role of women in an interview with Al-Monitor. “It is not about your gender, the way you look or what you wear; it is about whether you have the potential and the capabilities or not,” said Diab, a fourth-year student of medicine at Suez Canal University.

FameLab Egypt is part of an international science communication competition initiated in 2004 by the Cheltenham Science Festival and the National Endowment for Science, Technology and the Arts in the United Kingdom. Rolled out nine years ago, FameLab supports the Egyptian government’s efforts to advance science and build a culture that understands and supports the positive role science plays in the economic and social well-being of a society.

Although a man won the top prize this year, half of the 12 finalists were women, including Diab. She was the only woman wearing a niqab, while the others wore hijabs or did not cover their hair.

Yasser el-Shayeb, national coordinator of the EU Erasmus+ Programme for Egypt and one of the competition’s jury members, said the jury does not care about the appearance or the background of the competitors, but judge on content, clarity and charisma.

“We only look at three factors: scientific content; whether the competitor is able to convey the message in a clear and concise manner; and the communications skills that include charisma, eye contact and voice control,” Shayeb told Al-Monitor.

However, there have been only a few Egyptian female scientists in the history of the country. One of the most renowned female scientists was Sameera Moussa (1917-1952), who was a pioneer in nuclear physics. Moussa not only sought to split the atoms of cheap metals such as copper, she also attempted to make nuclear technology safe so it could be used in medical treatment.

Diab referred to an Egyptian male scientist when asked about her role models in science. “My role model is Sir Magdy Yacoub because he does much charity work and is brilliant at his job,” she said, referring to the Egyptian-British cardiac surgeon who established a foundation to help people in need.

Winner of FameLab Egypt 2016, Dina Ayman, said Marie Curie is her role model. "She was a Polish-born physicist and chemist who conducted research on radioactivity," she said. "The history of this woman greatly inspires and motivates [women] to be as strong, brilliant and witty as she was."

Ayman, who graduated with a master’s degree in immunology from the faculty of medicine at Ain Shams University, said that Egyptian women who pursue a career in science face an array of challenges. “I have seen many women who were brilliant in science, but they faced hurdles, including their families not allowing them to travel abroad or encouraging them to get married and start a family,” she said.

Ayman added that Egyptian society is conservative and encourages women to stay at home. “However, in recent years, women have become stronger and more adamant to pursue a career in whatever field they like. That is clearly manifested in the FameLab Egypt competition, where women are intensively taking part and strongly competing,” she said.

Mostafa Horas, a coordinator of FameLab at the British Council in Cairo, told Al-Monitor that the winner of FameLab Egypt represents the country in the annual international competition at the Cheltenham Science Festival in the United Kingdom, and that the organizers try to have a gender balance among the contestants.

“In FameLab it is always about the best science communicator and presenter. It is never about what you wear or where you come from,” Horas concluded.