As Egypt tightens grip on IS, it's also strangling Sinai residents

The Egyptian army has laid siege to the Sinai Peninsula in an effort to combat terrorism, but its actions are disrupting the lives of more than 250,000 residents. 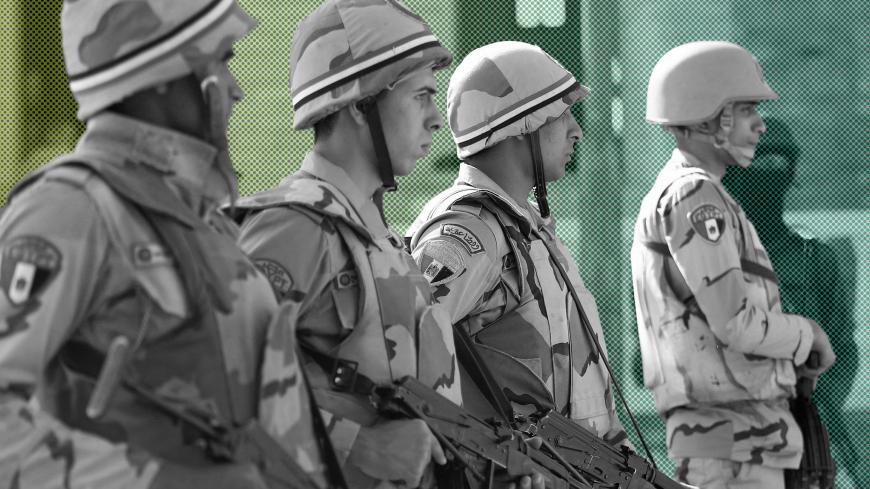 The humanitarian crisis in the northern Sinai Peninsula is worsening as civilians fall victim to the violence and ongoing siege imposed by Egyptian army and security forces trying to purge the area of the Islamic State (IS) and affiliated terrorists.

Many of these victims worry the government's actions will wind up actually helping the terrorists.

The government has been battling such groups there for years but upped its efforts in 2018, pledging to wrap up operations by the end of February. Yet the battles continue and civilians are suffering. The army-imposed siege enacted in February closed roads and water crossings that link northern Sinai to other Egyptian governorates. Not only is the siege restricting citizens’ movements, but it's also blocking shipments of food, medicine and fuel to 250,000 residents in the cities of Sheikh Zuwaid, Rafah and el-Arish, Sinai’s capital and largest city.

Shops in el-Arish have run out of supplies, and pharmacies have almost run out of drugs. Cars have become a rare sight on the roads because of the lack of fuel, but military vehicles are heavily deployed in the streets.

“With the closure of roads and a ban on goods, the army, the city council and well-connected individuals are now controlling sales outlets. Goods are being sold irregularly at double prices and in small quantities that are not enough to meet the needs of citizens,” an el-Arish shopkeeper told Al-Monitor.

Although life in el-Arish has virtually come to a standstill, residents there are still better off than in the border towns of Sheikh Zuwaid and Rafah. While the situation in Sheikh Zuwaid, a town 35 kilometers (22 miles) east of el-Arish, is bad, conditions in Rafah are worse. According to Rafah locals, car traffic is restricted and the army is shooting at any moving vehicle. Residents are forced to use carts pulled by mules and camels for transportation, with the cart fares now 30 times the price before the siege.

Rafah resident Umm Attiyah, 60, walks six miles daily to buy bread for her children and grandchildren as she can't afford a cart ride.

“It's risky for men to go out to buy food as they might get arrested, so women are now in charge of looking after their families. My grandchildren have not eaten for three days. Over the last month, they have had only some bread soaked in chamomile and herbs. It's difficult for me to provide milk and eggs,” she told Al-Monitor.

Another Rafah resident, Salmiyya, told Al-Monitor that Rafah and Sheikh Zuwaid used to be hubs for fruits, vegetables and "welfare for everyone."

"The army has destroyed all the farms. We had a paradise-like garden where we grew guavas, oranges, olives, tomatoes, cucumbers, melons, watermelons and all sorts of vegetables. We had a farm with lots of livestock. Today we barely have a loaf of bread to feed our children," she said. “Not only did they bulldoze our lands and demolish our houses, but they are denying us food and starving us."

Salmiyya said she wants to tell the United Nations, “Please help us. My daughter-in-law is pregnant and is sick from malnutrition. If you don't help us, we will become the victim of your silence. We're against terrorism. All we ask for is a law that protects us and distinguishes us from the terrorists.”

In Sheikh Zuwaid, Ibtisam told Al-Monitor, “We stand for hours in long lines hoping that the army’s national service cars will arrive so we can buy some food. When soldiers show up they treat us very badly. If we start rushing and pushing in the lines to get food, the soldiers beat and curse us with the most hideous insults. Sometimes they shoot in the air above our heads."

“Two children were shot dead by the army March 20," Rafah resident Aouda told Al-Monitor. "The army was trying to break up a crowd of hundreds of civilians who showed up in al-Masoura village [south of Rafah] in the hopes of getting their hands on [bags] of flour that were distributed under the soldiers’ supervision.”

A local journalist who refused to be named for fear of reprisal told Al-Monitor, “The situation in northern Sinai is catastrophic. Citizens — especially young people — are losing any sources of income because of the siege and arbitrary measures.”

He added, “If the military's plan to combat terrorism is designed to kill hopes and clamp down on people, spread unemployment and impose a media blackout, then it will only succeed in deteriorating the situation, spreading hate and further isolating Egypt. These practices actually serve terrorism only."

Amr Magdi, a researcher at Human Rights Watch's division for the Middle East and North Africa, told Al-Monitor that the army's siege "has led to almost complete paralysis of civilian life … and a real food crisis."

"The army must immediately provide an adequate food supply for citizens and allow local and international relief organizations to help the population to minimize damages. Should the siege continue in this way, this means the army is oblivious of the civilians in Sinai and is collectively punishing everyone with the military operations that are ostensibly targeting terrorists," he said.

Magdi believes the army is taking advantage of the media blackout on Sinai, preventing any coverage of the violations against civilians.

“The siege should come to a halt. The cessation of violations against the people shouldn't be motivated by fear of being exposed but rather [by] concern for the lives and security of civilians,” he concluded.