The Yazidi community, which only recently faced Islamic State attacks, is now getting ready for a Turkish military operation in Sinjar announced by President Recep Tayyip Erdogan. 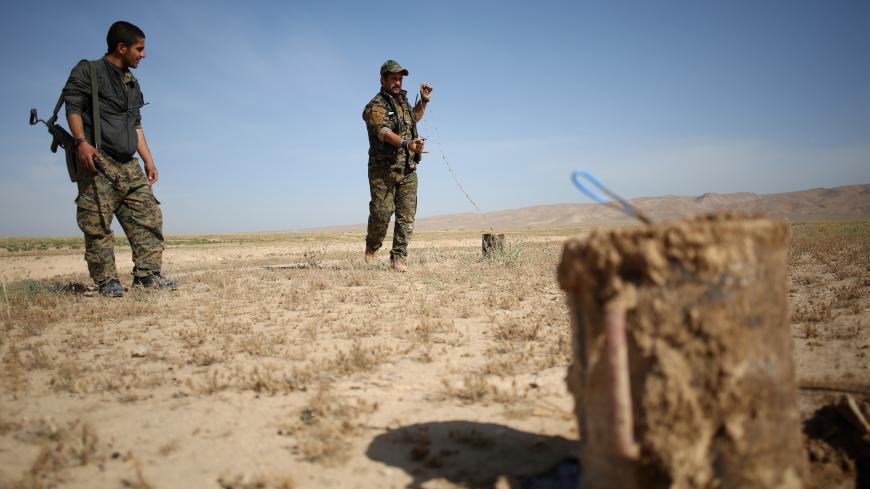 KHANASOOR, Iraq — Turkish President Recep Tayyip Erdogan said March 25 that Turkey had begun operations against the Kurdistan Workers Party (PKK) in the Sinjar region in northern Iraq. “We said we would go into Sinjar. Now operations have begun there. The fight is internal and external,” Erdogan said before a crowd in Turkey's Trabzon province.

Two days prior to Erdogan's statement, PKK fighters began withdrawing from Sinjar in order to avoid the targeting of civilians in the area.

For Dezhwar, a young Yazidi fighter in the Sinjar area, the silence of the international coalition against the Islamic State (IS) regarding the all-out Turkish attack on the city of Afrin, home to a sizable Yazidi community, was a bitter reminder that in the game of realpolitik between states, minorities such as the Yazidis have no one to turn to.

Despite the Turkish president's threats, Iraq's Joint Operations Command said late March 25 that no foreign forces had crossed the border into Iraq and there were no reports of unusual military activity.

The news from Afrin is gloomy for many Yazidis in Sinjar who survived IS attacks in the summer of 2014. Reports say that their shrines are being burned in Afrin and that some Yazidi civilians who stayed behind in the area have been forced to convert to Islam by extremist elements of the Free Syrian Army backed and armed by the Turkish government.

Yazidi civilians in Sinjar fear that they are the next target of the mighty US-supplied F-16s of the Turkish state, as Erdogan threatens "another Operation Olive Branch” in Sinjar to “clear the region of terrorists.”

In August 2014, Dezhwar, who served in the 2nd Division of the Iraqi army for eight years, watched as IS caused havoc in Sinjar, killing and enslaving thousands of Yazidis and blowing up their shrines. While Iraqi and Kurdish forces abandoned the Yazidis, and Turkey was alleged to have allowed its territory to become a main artery for foreign fighters who arrived from across the world to reinforce IS in Raqqa and Mosul, Dezhwar watched as a group of Syrian Kurdish fighters from the People's Protection Units (YPG) came to the rescue of Yazidi civilians. He was so impressed by the bravery and discipline of the YPG fighters that he and around three dozen other Yazidis stayed behind and, supported by the group, formed the nucleus for a local Yazidi militia that became known as the Sinjar Resistance Units (YBS).

Four years later, the YBS has grown into a highly disciplined force of around 3,000 mainly Yazidi fighters, in addition to Shiite and Arab fighters who receive their salaries from the central government in Baghdad. For three years, the YBS was a critical ally of the international coalition against IS in the Sinjar area, losing more than 350 fighters and close to 1,000 others sustaining injuries. The group has been criticized in the past by human rights organizations for allowing children under the age of 18 to serve in its ranks.

The YBS does not hide its ideological affiliation with the PKK and is open about how it was assisted and trained in the early stages of the war by "military advisers" from the PKK and YPG as they fought IS in Sinjar. Dozens of posters of YPG, PKK and YBS fighters killed fighting IS are displayed from utility poles in Khanasoor town, a stronghold of the YBS. Posters of Abdullah Ocalan, the imprisoned founder of the PKK, are ubiquitous in the northern mountainous region, with even vehicles of the traffic police plastered with Ocalan's image. "If we are the PKK, we would go and fight inside Turkey," Dezhwar, who is now the YBS spokesman, told Al-Monitor in Khanasoor on March 17. "We are on our soil protecting our Yazidi way of life and our history within the boundaries of Iraq."

"For me there is no difference between the Turkish army and [IS]," Hamid Ido told Al-Monitor in the center of Sinjar town, as members of various militias roamed around the street. "I will fight the Turkish army with whatever I have," he said.

Around 4,000 families have returned to the plains in the southern mountainous area that is still devastated by war and struggling with a lack of electricity, water and jobs. Iraq needs close to $100 billion to rebuild the areas destroyed during the 3½-year battle with the jihadis. "We do not want Turkey here," said Yaser Haji, who had returned to Sinjar from a camp for internally displaced persons in the Kurdistan Region. "Instead of another war, we want our hospitals and schools to be rebuilt again."

Sinjar has been under the control of the Iraqi army and the Popular Mobilization Units since mid-October, when Kurdish peshmerga withdrew as Prime Minister Haider al-Abadi bolstered his power by regaining control of the disputed territories. In the devastated city, the old IS slogans have been replaced by new Shiite militia slogans: "Ali's State remaining" is graffitied on a wall, referring to Prophet Muhammad's cousin revered in particular by Shiite Muslims and a play on the infamous IS slogan, "Islamic State remaining." The Kurdish flags painted on the walls had been crossed out and replaced by “Daesh,” an Arabic acronym for IS.

But as the various militias fight for control of the region, the YBS, which would be at the receiving end of a possible Turkish invasion, appears to be preparing for war. Fresh soil dug out from the heart of the mountains appears to be an indication that the YBS is fortifying its hideouts by digging deep and long tunnels in the sprawling mountains. The tunnels appear to have come into existence following last year's Turkish bombardment of Sinjar in which a teenager and five peshmerga fighters were killed, allegedly by mistake. The YBS had prior knowledge of the airstrike and protected itself by hiding in the mountains.

In the last few years, Turkey has repeatedly bombed the Kurdish mountainous region in northern Iraq, killing with impunity over two dozen civilians in pursuit of PKK militants.

If an attack by Turkey materializes, it would probably be the last nail in the coffin of the Yazidis in Sinjar, as thousands of its residents have migrated to Europe and the United States since 2014. In Khanasoor, where over 33,000 Yazidis lived alongside four Christian families, there are only 2,000 people left. "Three of my brothers now live in [the US state of ] Nebraska and three others live in Germany," said Delshad, who runs a cafe in the town. "I served with YBS for a few months but their lifestyle was very tough and I am not suited for that."

Dezhwar, who believes Baghdad would not allow a Turkish invasion, added, "We are not digging tunnels because of Turkey. We believe the Yazidis are still under threat and it is our duty to protect them. If we have posed a threat to Turkey, let them present their evidence but they should know that our duty is to defend ourselves and our people and the term 'surrender' does not exist in our vocabulary."