During a time of shifting alliances, Ankara views Jordan as an important potential ally — which no doubt has been a factor in Turkey's decision to renegotiate a free trade pact that Amman says favors Turkey. 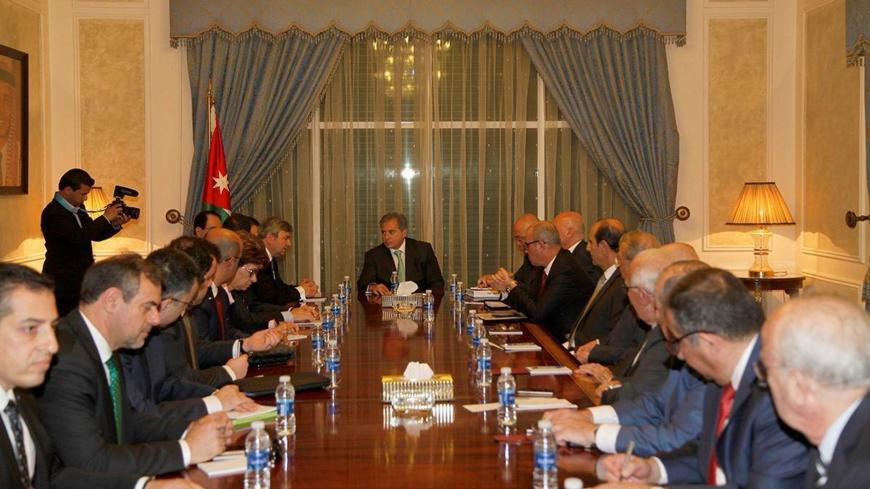 Jafar Hassan, Jordan's deputy prime minister and state minister for economic affairs, sits at the head of the table as he meets with Turkish members of the Jordanian-Turkish Business Council, Amman, Jordan, March 20, 2018. - Twitter/@PrimeMinistry

Jordan said April 1 that it will reconsider its decision to suspend its free trade agreement with Turkey if Ankara agrees to specific conditions. The agreement has been in effect since early 2011.

Last month, Jordan announced it would suspend what it termed a lopsided free trade agreement beginning in September unless the two sides can iron out their differences. The Jordanian Ministry of Industry, Trade and Supply said the decision was necessary to “avoid further negative effects on the Jordanian industrial sector in light of unequal competition.”

A senior Turkish diplomat told Al-Monitor, “There are three areas that we are working on: evening out the balance of trade between the two countries, increasing the extent of Turkish investments in Jordan and simplifying the rules of the free trade agreement.”

Turkey has said in the past that it is willing to consider those very proposals, officials in Ankara said. There is good reason to be hopeful, as Jafar Hassan, the Jordanian deputy prime minister and state minister for economic affairs, met March 20 with Turkish members of the Jordanian-Turkish Business Council to discuss further investment opportunities in Jordan. Ankara said then it was optimistic that the terms can be renegotiated.

According to data from the Ministry of Economy, Turkey's exports to Jordan in 2016 stood at $710 million and Jordanian exports to Turkey at $102 million. Jordan also has strong trade imbalances with other countries; in addition, Turkey is not among Jordan's top five trade partners.

Jordan has repeatedly warned Turkey about the trade imbalance.

The countries became closer after the controversial decision late last year by the United States to support Israel's claim on Jerusalem as its capital and to relocate the US Embassy there from Tel Aviv. Given the wars in Syria and Iraq, the increasing number of refugees in the region and Turkey's deep fears of isolation, Jordan and Turkey have also found other ways to boost relations. For example, they announced Feb. 21 that they had signed a military cooperation agreement.

• First is Turkey's conflict with Gulf countries. Saudi Arabia and the United Arab Emirates (UAE) have not been pleased with Turkey's support of Qatar, and also have influence over Jordan. In reaction to President Donald's Trump decision on Jerusalem, Turkish President Recep Tayyip Erdogan called for an emergency meeting of the Organization of Islamic Cooperation, where member states condemned the US action in December. The Jordanian king was present, but Saudi Arabia and other Gulf countries, along with Egypt, sent no high-level representatives. The Saudi-led Gulf alliance has been on rather good terms with the Trump administration. Because Jordan feels badly bruised by the United States over the Jerusalem decision, even while signing a five-year memorandum of understanding in February, Jordan has been inching toward Turkey; however, analysts say the Saudi bloc does not want to allow this. Shortly after the summit, Turkey and the United Arab Emirates (UAE) argued publicly about what the latter says is Turkey's desire to revive the Ottoman legacy on the Arabian peninsula. Since then, the Turkish press has not missed an opportunity to emphasize anti-Turkish sentiments emanating from the UAE, such as the call from the Emiratis for the Saudis and Egyptians to unite against Turkey and Iran, or for the UAE and Egypt to support the Kurdistan Workers Party (PKK), which Turkey considers a terrorist group. Turkey has incessantly criticized the US backing of the People's Protection Units, which is considered the PKK's extension in northern Syria.

• The second obstacle is the struggle to establish a balance against predominantly Shiite Iran. The more Arab countries snub Turkey, the more Turkey is led to cooperate with Iran, and given the difficulties Turkish-Iranian relations face on multiple fronts (for example, the Syrian civil war and Iran's expanding influence there), an alliance with Jordan could prove attractive for Ankara. Musa Ozugurlu, a seasoned journalist specializing in Middle Eastern politics, told Al-Monitor, “Trump’s decision to favor Saudi Arabia, and all the problems Turkey is going through with the United States, makes life rather challenging for Ankara. Turkey under Erdogan’s leadership — calling for Sunni unity and leadership of the Muslim world — is a source of serious rivalry.” On March 7, Saudi Crown Prince Mohammed bin Salman called Turkey, along with Iran and Islamic radicals, the "triangle of evil."

• The third hurdle is rivalry for influence in Arab countries and Africa. Saudi Arabia's desire to be the unquestioned leader of the Sunni Arab world means that the loyalties of a small yet crucial kingdom such as Jordan are coveted. The Syrian, Iraqi and Yemeni wars, continuous unrest in many parts of the Middle East and Africa, the region's masses of young people and an increasing availability of guns have all generated a competition for influence. In 2009, Turkey dreamed of establishing a visa-free area between it and Syria, Lebanon and Jordan, later to include Iran and Iraq. While that dream ended, there is now stiff rivalry when it comes to arms sales to and control of militias. At the end of December, Turkey acquired a 99-year lease from Sudan for Suakin Island, increasing Turkey's presence in the Red Sea. This move has unnerved the countries that identify themselves as "the Arab Anti-Terror Quartet" (Egypt, Saudi Arabia, the UAE and Bahrain). Turkey’s relations with African nations are flourishing. Not everyone is happy about such developments, and this could cause problems for Turkish-Jordanian relations.

• The fourth challenge is financial. Turkey wants Jordanian markets but faces roadblocks posed by Gulf countries. Since March 2016, Turkey and Jordan have been trying to plan, without success, a maritime route between Turkish ports (Iskenderun) and Jordan's port of Aqaba to reach out to Gulf markets. Yet without political compromises, economic cooperation does not seem sustainable in the region. Turkish Airlines restarted direct flights March 19 between Istanbul and Aqaba. Intriguingly, also in March, the Saudi crown prince was in Cairo discussing the proposed multibillion-dollar King Salman Bridge to link Egypt and Saudi Arabia through the entrance of the Gulf of Aqaba; some see this as a reaction to the Aqaba flights and the maritime route project. During his visit March 12 to the Jordanian capital of Amman, the UAE foreign minister reportedly promised to help Jordan with its various economic challenges and establish stronger regional ties. Turkey believes these developments are behind Jordan's suspension of the free trade agreement. Jordanian businesspeople and analysts concur that the UAE and Saudi Arabia had a hand in the suspension decision.

The threat to suspend the Jordanian-Turkish free trade agreement shows how precarious agreements are in the region. Even when all seems to be in order, a crucial part of a relationship may collapse. The development also highlights that Turkey desperately needs to diversify its opportunities in foreign policy. Repeated mistakes and costly failures have significantly limited Turkish foreign policy options in the past. In the past decade, Turkey’s ambitions and rhetoric have not matched its capabilities and achievements. Yet in regard to the free trade agreement with Jordan, Ankara is not only determined but also well-organized. If Turkey can overcome the obstacles outlined, a free trade agreement revision would indeed be a win for Ankara.