Turkey poised to open a military front in Iraq

Improved relations between Iraq and Turkey have raised the possibility of a joint offensive against Kurdish militants in northern Iraq. 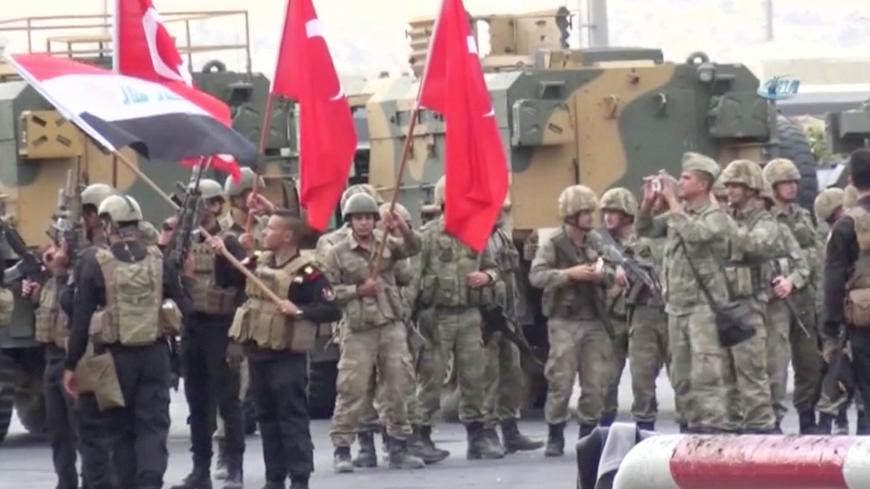 Iraqi and Turkish soldiers wave flags at the Habur border gate between Turkey and Iraq in this still image taken from video, Oct. 31, 2017. - IHA/ via REUTERS

Turkish-Iraqi relations had become extremely tense until the decision by Massoud Barzani, former president of the Kurdistan Regional Government (KRG), to hold an independence referendum for Iraqi Kurdistan. Barzani's ill-fated move made fast friends of Ankara and Baghdad. Now, it appears that Turkey and Iraq have found further common cause, this time for joint military action against the Kurdistan Workers Party (PKK).

Agreements signed by Ankara and the KRG on oil and natural gas were, not so long ago, a major source of dispute with Baghdad. As an additional irritant, an Iraqi vice president, Tarek al-Hashemi, accused of leading a terror organization and sentenced to death in absentia for a number of related deaths, had taken refuge in Istanbul under the protection of the Turkish government. Ties between Ankara and Baghdad then neared the point of rupture over Turkish forces' presence at the Bashiqa military base, near Mosul, in anticipation of that city's liberation from the Islamic State (IS).

Barzani’s decision in the face of widespread opposition to nonetheless proceed with the independence referendum, held last Sept. 25, thawed most of the ice between Ankara and Baghdad. Turkey announced that it would not recognize the results of the referendum and backed sanctions that Baghdad imposed on Erbil. The Turkish Armed Forces (TSK) began massing troops on territory adjacent to northern Iraq and for the first time held a joint military exercise with the Iraqi army. The developing rapprochement peaked with Turkey’s announcement of a $5 billion credit for Iraq's reconstruction after the defeat of IS.

With Iraqi Prime Minister Haidar al-Abadi upset over the Turkish military forces in Bashiqa, and with tensions mounting over plans to liberate Mosul, President Recep Tayyip Erdogan had warned Abadi in October 2016 to “know your limits,” and further admonished, “You are not at my level.” A year later, the same Erdogan warmly welcomed Abadi during a visit to Ankara and praised the Iraqi army’s success against IS. Ankara then proposed cooperating to cleanse the region of terror.

“There is the question of the PKK presence in areas like Qandil and Sinjar,” Erdogan said. “As Turkey, we are ready to engage in joint struggle in those places.” Abadi offered in response, “Our duty is to ensure the territorial integrity of Iraq and combat terror organizations that threaten not only Iraq but the entire region,”

Just before the Iraqi Kurdistan referendum, the Turkish parliament convened for an emergency session on Sept. 23 to authorize cross-border operations into Iraq and Syria until Oct. 30, 2018. The ruling Justice and Development Party (AKP) and two other opposition parties approved of the measure, which the pro-Kurdish Peoples' Democratic Party (HDP) opposed. “This decision is an open and clear declaration of hostility against 40 million Kurds,” said Osman Baydemir, an HDP deputy, addressing the assembly.

The TSK launched Operation Olive Branch on Jan. 20 of this year with allied Free Syrian Army (FSA) forces. The campaign centered on Afrin, in northern Syria, targeting the Syrian Kurdish People's Protection Units (YPG), which Ankara considers to be an extension of the PKK. Now, a joint operation with the Iraqi army against the PKK appears to be in the cards. On March 1, Gen. Hulusi Akar, Turkey’s chief of the general staff, paid a surprise visit to Baghdad, where he met with his Iraqi counterpart, Gen. Othman al-Ghanimi, and Defense Minister Irfan al-Hiyali.

Turkish Foreign Minister Mevlut Cavusoglu said on March 9 that the Afrin operation is likely to conclude in May and that a joint campaign with the Iraqi government against the PKK is likely to be launched after Iraq holds general elections, scheduled for May 12.

Turkish Prime Minister Binali Yildirim weighed in on the same day, asserting, “Of course we are in close contact with the Iraqi government both to fully eliminate Daesh [IS] and the PKK from the region. I hope we will have better cooperation in days to come.”

Turkey has conducted numerous cross-border air and ground operations into northern Iraq since clashes began with the PKK 33 years ago. Such operations were halted during 2012-13 due to a cease-fire and peace process with the Kurds. In February 2015, Turkey launched Operation Shah Euphrates, its first major campaign, to protect the tomb of Suleiman Shah from IS. Then came Operation Euphrates Shield from August 2016 to March 2017 against Kurdish forces in the area and IS.

As indicated above, Operation Olive Branch remains ongoing. To put a northern Iraq operation on the agenda while the Afrin operation is underway suggests that Ankara is trying to take advantage of the widespread nationalist sentiments created by the Afrin campaign. Hurriyet columnist Abdulkadir Selvi, known to be close to the government, said that support for the AKP, which had declined to 40%, rose to 55% following the Afrin operation's launch.

Adil Gur, manager of the A&G Polling Company, said his polling shows 90% support for the Afrin campaign and that 88% of the Turkish public see the “[YPG] as an extension of the PKK and a threat to Turkey.” Gur also noted that 82.8% of Kurds do not consider the United States to be a friend of the Kurds.

Retired Brig. Gen. Naim Baburoglu served in Turkey’s predominantly Kurdish southeast and led operations against the PKK in Turkey and beyond its border. He told Al-Monitor, “First, remember we have elections soon in Iraq, but for the new parliament to convene and set up a new government will take time. The Iraqi political scene is very complex. Second, Prime Minister Abadi is very close to the US. We should not expect an operation immediately after the Iraqi elections. The US has to give Abadi the green light. In recent times our army cooperated with the Iraqi army. They held joint exercises. It will be possible for the two armies to cooperate for a joint operation in northern Iraq.”

He continued, “The Iraqi government is also not comfortable with the Kurdish presence in that region. Sinjar is on the path of becoming a new Qandil. Turkey has to do something or suffer massive headaches in days to come. When you say ‘east of the Euphrates,’ that means clearing Afrin, Manbij in Syria and Sinjar in Iraq of the PKK and terror. Otherwise it would be an incomplete operation. If it takes too long for Iraq to set up its government, then Turkey may look into going in alone after agreeing with Iraq. This was done before.”

Foreign Minister Cavusoglu’s remarks also signaled that even if the Afrin operation fails to conclude by May, Turkey will still consider conducting operations in Syria and northern Iraq simultaneously.

Erdogan must be calculating that an operation in northern Iraq will be beneficial to him in the 2019 elections, so his government must therefore maintain a war footing until elections. Moreover an operation in northern Iraq could be an ace in the government’s hands today. Given discussions with the European Union on lifting the state of emergency and returning to the democratic process as soon as possible, Ankara could do so in some areas of the country, but justifiably maintain it in the southeast because of the ongoing war. That might partially assuage EU demands.