Turkey and Iran have reversed a four-year downturn in bilateral trade as collaboration in Syria increases, but the possibility of a setback remains real. 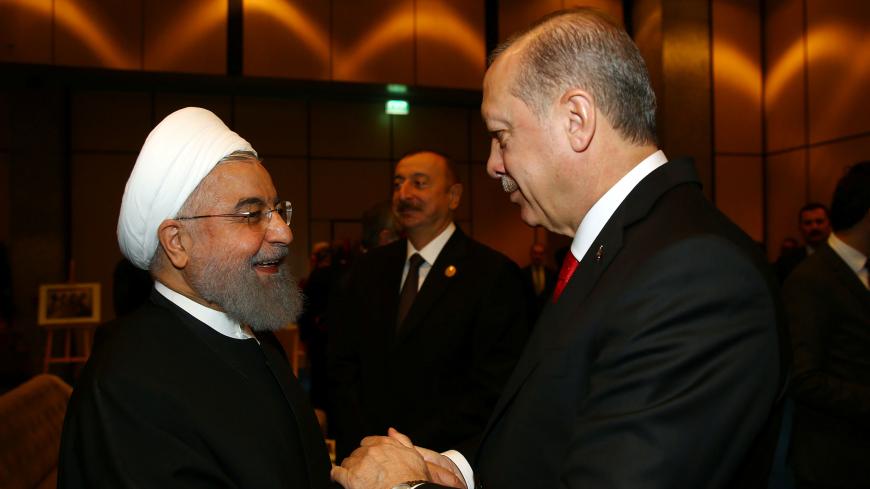 After a four-year downturn, trade between Turkey and Iran rose in 2017, as the two neighbors began collaborating in Syria. Judging by figures from the past five years, the political climate between Ankara and Tehran seems to directly affect commercial ties. Their bilateral trade volume contracted during periods when Turkey’s Middle East policies led to closer cooperation with Saudi Arabia and deeper differences with Iran, but perked up in 2017, when the two countries engaged in joint efforts in Syria.

Trade volume between Turkey and Iran reached an all-time high in 2012, totaling $21.9 billion. In 2013, it fell sharply, to $14.5 billion, under the impact of US sanctions on Iran. The decline continued in 2014, down to $13.7 billion. In a bid to prop up commercial ties, the two countries enacted a preferential trade agreement at the start of 2015, cutting tariffs on hundreds of products. A target was set of $35 billion in annual bilateral trade.

The nuclear agreement Iran signed with the world powers soon led to the lifting of sanctions, fueling hope that no major obstacles remained to the desired boom in bilateral trade. Yet despite positive developments, trade volume slumped to $9.7 billion in 2015 and then to $9.6 billion in 2016. The worsening figures were a clear sign that commercial ties would fail to take off unless the two countries resolved areas of conflict in their regional policies, chief among them the crisis in Syria.

Things began to change in 2017, as Turkey came to loggerheads with the United States in Syria and engaged in efforts with Russia and Iran toward a resolution to the conflict. A significant factor bringing Ankara and Tehran closer has been a shared concern that their countries could be next in line for trouble stemming from the regional upheaval, with the Kurdish problem growing more complicated for both of them.

Turks have long been concerned that Western powers want to “divide” their country, and this has been a major factor shaping domestic and foreign policies alike. In this vein, one major motivation behind Turkey’s new alliances is to move to neutralize any risks that might lead to partition. For a great deal of ordinary Turks and even state officials, many NATO countries are not really allies, but Western powers plotting to carve up Turkey to create a proxy Kurdish state adjacent to Iran and diminish Turkey's position as a regional power. Hence, the idea of bolstering regional alliances enjoys solid public support. Political, military and economic rapprochement with Iran, Russia and Iraq and the narrative of preserving Syria’s territorial integrity rest on the notion of standing together with allies to stave off threats to the integrity of Turkey's border and avoid partition.

Amid the drive to strengthen regional alliances, high-level visits between Turkey and Iran intensified last year. The two sides agreed to use their national currencies, instead of the US dollar, in bilateral trade. A deal to that effect was signed by the Turkish and Iranian central banks in October.

Parallel to the political rapprochement, the trade volume rose for the first time since 2012, standing at $10.7 billion at the end of 2017, representing a $1.1 billion increase from 2016. Iran benefited more from the revival than Turkey did. Its imports from Turkey amounted to about $3.2 billion, down from nearly $5 billion in 2016, while its exports to Turkey increased to more than $7.5 billion, up from about $4.7 billion the previous year. In other words, Iran reversed the trade balance in its favor, from a $266 million deficit in 2016 to a surplus of nearly $4.3 billion in 2017.

In fact, however, the figures show that bilateral trade is only returning to normal. In the past 17 years, 2016 was the only year in which Iran ran a trade deficit in regard to Turkey, with surpluses ranging between $579 million and $8.8 billion in other years.

How did the balance shift in Iran’s favor? Increased oil supplies to Turkey were the main factor. Official data is not yet available, but according to figures compiled by Turkey’s state-run Anatolia Agency, oil imports from Iran reached 7.4 million tons in the first seven months of 2017, a 142% increase compared to the same period the previous year. Increases of more than 100% were also seen in Turkish imports of untreated zinc, nitrogenous minerals and chemical fertilizers, untreated aluminum, and fresh and dried fruits.

Why then did Turkish exports decrease? The decline stems primarily from a dramatic slump in Turkey’s once-booming gold exports to Iran, which trickled to $111 million last year, from $1.3 billion in 2016.

Iran's vast energy reserves — 150 billion barrels of crude oil and 33.5 trillion cubic meters of natural gas — make it one of the world’s leading energy producers, while neighboring Turkey remains a major oil and gas importer amid efforts to become a key energy route between the Middle East and Europe.

Bolstering economic ties with Iran may be beneficial to Turkey, but the possibility of a setback cannot be ignored given recent fence-mending moves between Ankara and Washington. The Donald Trump administration clearly has Iran in its crosshairs. Meanwhile, Turkey has become a potential target of US sanctions over its plan to purchase advanced Russian missiles, atop the lingering spat in Syria.

If Ankara is committed to mending fences with Washington, doing so while maintaining cooperation with Iran will require masterful balancing acts.