The arrest in Iran of cleric Hussein Shirazi, who belongs to an influential religious family in Iraq, sparked outrage and protests among his supporters in several countries. 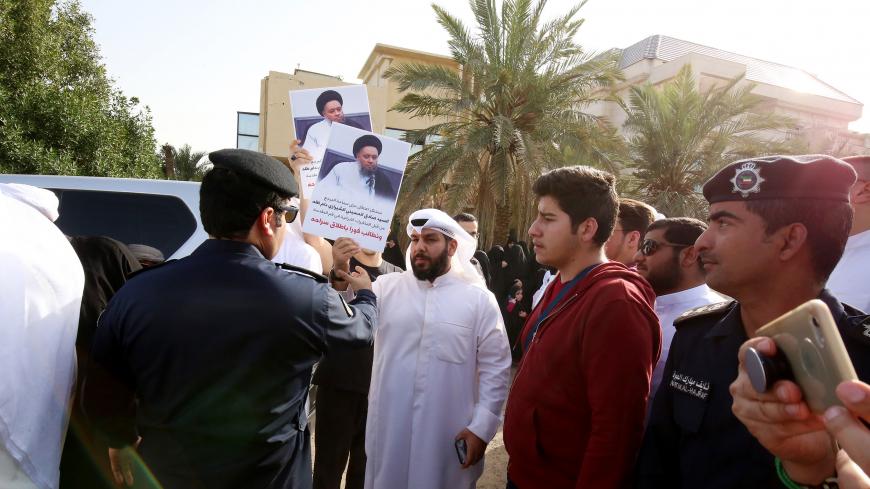 The repercussions of Iran's controversial arrest of the Shiite cleric Hussein Shirazi could include a weakening of Iranian influence over Shiites in Iraq. On March 6, Iranian authorities arrested Shirazi, who was beaten and insulted in front of his father, Grand Ayatollah Sayed Sadeq Shirazi, while the Shirazis were on their way home in the city of Qom. Hussein's detention stems from a recent lecture he gave to Qom seminary students on jurisprudence in which he compared the practices of Ayatollah Ali Khamenei, Iran's supreme leader, to those of oppressive Egyptian pharaohs who couldn't be criticized or held accountable for their actions.

Hussein Shirazi and his father hold dual citizenship in Iran as well as in Iraq, where their influence is especially strong. Their family, whose roots date back 150 years in Iraq, founded the Shirazi political movement, which has followers across the Middle East. The Shirazi movement has traditionally held that a council of Islamic jurists should be in a position of authority in a country, rather than just one supreme leader, such as has been the case with Ayatollah Ruhollah Khomeini or Khamenei.

Iraqi demonstrations against Hussein Shirazi's arrest broke out in front of the Iranian Consulate in Karbala, the Iranian Embassy in Baghdad and near the border with Iran in Basra. The protesters shouted slogans against the Iranian regime's ongoing repression of their religious leaders in Iran, and demanded Shirazi's immediate release. They also called on Iraqi Prime Minister Haider al-Abadi and his government to intervene and pressure Iran to release Shirazi.

In London, members of the Iraqi community protested in front of the Iranian Embassy. Four people were arrested after they climbed onto the porch and lowered the Iranian flag and then raised the Shirazi flag. British police intervened to restore calm.

Protests also took place in Kuwait and other Arab countries. During a demonstration in front of the Iranian Embassy in Kuwait City, Sheikh Yussef Mulla Hadi, a leader in the Shirazi movement in the country, described the Iranian regime as a dictatorship masquerading under the banner of velayet-e faqih (clerical rule) and demanded that Shiites around the world renounce it.

Sadeq Shirazi's older brother, Mohammad, was among the founders of the principle of velayet-e faqih, but the family believes Khamenei and Islamic Republic founder Khomeini have corrupted the concept. Mohammad Shirazi, who died in 2001, had called for establishing a velayet-e faqih, or council of jurists, but Khomeini advocated that ultimate authority be held by an individual.

Differences in interpretations appear to be leading to a Shirazi rejection of the concept of velayet-e faqih altogether. Hussein Shirazi now says velayet-e faqih, as implemented by Iran, enslaves the citizenry and contradicts the principles of freedom, equality and democracy

Mohammad Shirazi, who led the Shirazi movement, established his religious authority in Karbala during the 1960s and 1970s, until moving to Iran and settling in Qom in 1979. In the early 1970s, he founded the Islamic Action Organization, which supported liberation movements in the Islamic world, including that of the Palestinians. There also was a third brother, Hassan Shirazi, who was assassinated in Lebanon in 1980 because of his activities on behalf of the Shirazi movement.

Hussein Shirazi has made scathing comments against Khamenei over the years. In his most recent speech, he also criticized the brutal eight-year war (1980-88) between Iran and Iraq, which he described as a Khomeini political venture to expand Iran's Islamic Revolution. Shirazi has even gone so far as to compare Khomeini and Khamenei to the men who killed the Prophet Muhammad's grandson Hussein, revered by Shiite Muslims as the third imam.

Mohsen Kadivar, a prominent Iranian reformist cleric and visiting professor of religious studies at Duke University, has called velayet-e faqih a religious dictatorship. He believes the unprecedented, open criticism of clerical rule by Shiite clerics could create major problems for the Iranian regime. This is especially the case because such criticism is coming from the Shirazi movement, which is so strongly associated with political Shiite Islam and so deeply tied to the establishment of Iran's velayet-e faqih. Kadivar has called on the Shirazi movement's religious jurists to produce a doctrinal theory rejecting velayet-e faqih.

These developments, among a series of previous Iraqi Shiite reactions to Iran's role in Iraq — such as the cleric Muqtada al-Sadr's distancing himself from Iran and Iraqi Ayatollah Ali Sistani's refusal to meet with several Iranian officials — are likely to signal a potential curtailing of Iranian influence among Iraqi Shiites. It appears some Shiites are changing their views after experiencing the repressive practices of religious rule.