The property of the regime of Saddam Hussein has become subject to confiscation, while many of the buildings are owned by political parties and occupied by current ministers and officials. 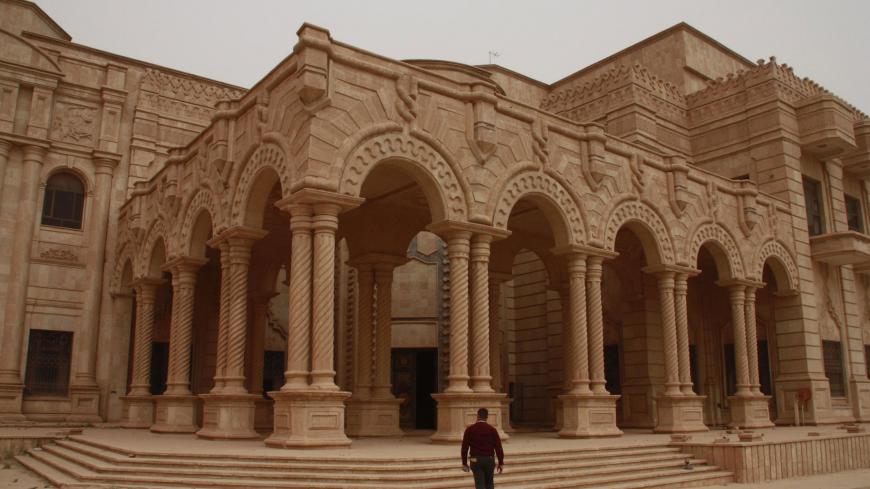 Iraqi authorities have been given the green light to begin confiscating the assets of late President Saddam Hussein, along with the assets of many of his relatives and thousands of people who were associated with his regime. Some critics, however, say the process lends itself to corruption and raises questions about the timing of the decision and the value of the assets as well as their future use.

The Iraqi Accountability and Justice Commission on March 5 said it has completed its list of the people whose assets are to be seized: 52 people who were senior officials during Saddam's regime and 4,257 ex-ministers and officials of his Baath Party. The list includes deceased relatives, including Saddam's cousin Ali Hassan al-Majid, known as Chemical Ali, who was hanged in 2010 for gassing 5,000 Kurds in northern Iraq in 1988.

Abdul Rahman al-Louizi, a deputy in Iraq's parliament, told Al-Monitor the issue can be traced back to the property seizure law crafted by US administrator Paul Bremer, who took over Iraq's administration after the United States invaded Iraq in 2003.

Louizi said the measure "still has many gaps, most of them relating to specific categories of employment."

"It includes governors from Saddam's regime, but it doesn't include [some] ministers from that time due to the political implications.” He added, “The decision doesn't address the [chaos] that emerged after the fall of Saddam's regime." He said some people on the list have "redeemed" themselves in recent years by fighting terrorism. For example, Maj. Gen. Ahmad Sadak al-Dulaimi, who died in the fight against the Islamic State, is considered a martyr among many Iraqis.

This was also why Prime Minister Haider al-Abadi criticized the decision March 6.

While Louizi believes “resolving the fate of the former regime’s assets will lead to their use in the interests of society,” progress has been slow, considering 15 years have passed since Hussein was deposed.

Some moves were made previously to take advantage of the wealth of property left by Hussein's regime. In 2009, his former palace at the historic site of Babylon was transformed into a luxury hotel. His riverside palace in the southern city of Basra, which once served as the headquarters for US and Polish forces, has been turned into a museum.

Suhaila Abbas, a member of the Babylon regional council, told Al-Monitor, “The accountability, justice and real estate services have not resolved much. … Many properties in Babylon and other provinces were turned into the headquarters of powerful parties, but this has yet to be resolved.”

She added, “Most of the palaces occupied by [Hussein] and his family were not registered under his name but under Iraqi ministries. Yet current ministers and officials have refused to leave."

The claim relates to reports published March 10 of “senior officials refusing to leave Saddam Hussein’s palaces, seized after the US invasion, in the Green Zone and other Baghdad neighborhoods.”

Abbas’ words hint at the potential role of corruption in determining the fate of the assets. On April 16, 2017, a member of the Iraqi Integrity Commission told the media, “The confiscation of former regime symbols opens the door for corruption and enrichment of current parties. Most of those properties are now occupied by political leaders and members of the government and parliament.”

There is growing suspicion around the misuse of property that should be recovered by the state and used to benefit society, according to a Baath Party member in Babylon who did not want to be named. “All the Baath Party headquarters in the central and southern regions were taken over by [political] parties. Others were deliberately not resolved until a significant amount of time had passed. They were then sold for nominal prices to influential groups,” he said.

The commission's decision was also criticized for allegedly indicting individuals and groups from the Sunni community specifically. A commission media official who asked not to be named told Al-Monitor, “Such accusations fly in the face of fact. The latest decision did not identify a certain group, because it was issued before the Council of Ministers. The Accountability and Justice Commission is an investigatory body that provides the concerned parties with information about individuals, material and procedures relating to confiscation, so the whole process does not target a particular sect.”

Kamal Zaidi, a member of the parliamentary Legal Committee, played down doubts about the confiscation procedures and the fate of the property. Commission members "work with legal advisers to establish regulations and mechanisms relating to the seizure of the former regime’s funds and property and how to deal with them," he told Al-Monitor.

“The executive institutions today are aware of the legal protocols governing their task. They will act accordingly to resolve the property issue, despite differences between political forces over the fate of assets.” Zaidi added, “The government will begin work on the final decision to resolve the issue of funds and property, inside Iraq and abroad.”

To deal with the controversy surrounding the decision, those who enforce it must make their efforts transparent, especially regarding the charges that many people now occupying the properties are dragging their feet so they can remain there.