The United States last month shipped a historic archive of Baath regime documents to Iraq, but the government is keeping mum about its location and fate, given the political sensitivity of the documents. 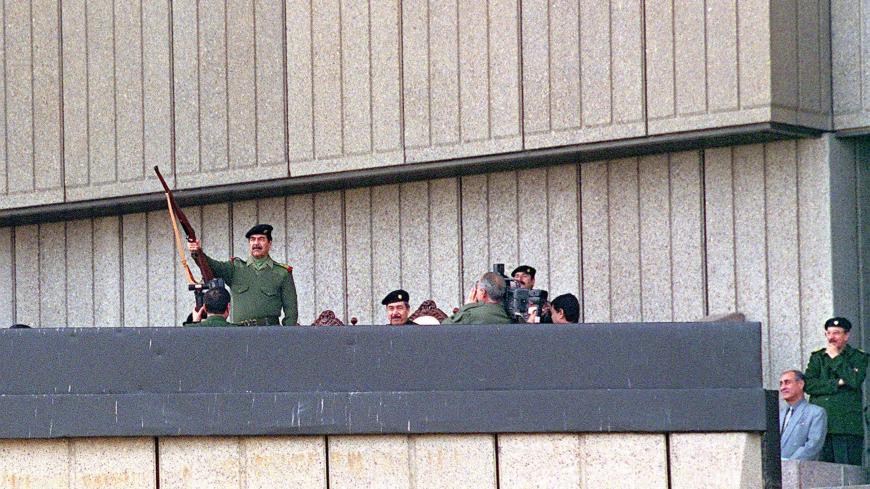 The government of Iraqi Prime Minister Mustafa al-Kadhimi is treating the Baath Party archives that supposedly arrived in Iraq in late August with complete confidentiality.

Despite media reports Aug. 31 about the arrival in Baghdad of tons of documents relating to one of the darkest periods in the history of Iraq, the Iraqi government has yet to issue an official statement announcing their fate or how it will be dealing with the papers.

Hisham Daoud, one of the government’s most prominent advisers and sometimes its media spokesperson, told Al-Monitor, “I, unfortunately, do not have any information about this dossier.”

Daoud referred Al-Monitor to the Iraqi Embassy in Washington or to one of the Washington-based researchers who previously worked on the Baath archive. He also suggested asking the Ministry of Culture about the documents.

For his part, Iraqi Minister of Culture Hassan Nadhim did not respond to the two letters sent by Al-Monitor inquiring about the documents.

Iraq's Foreign Ministry official spokesman Ahmed al-Sahaf did not have any answers regarding the documents either, and he rushed to suggest resorting to Kadhimi's media office for information about the subject.

The tons of documents pertaining to the Baath Party, which ruled Iraq with an iron fist for nearly three decades, garnered great interest from Kadhimi, who worked for many years at the Iraqi Memory Foundation led by Iraqi writer Kanan Makiya. The foundation seeks to instill in all Iraqis memories of the Baath Party's crimes.

Kadhimi participated with Makiya in the process of having the Baath dossiers sent to the United States following the overthrow of Saddam Hussein.

A source close to the prime minister’s office told Al-Monitor on condition of anonymity that “there are various and complex documents containing internal reports on the activities of the Baath Party. These documents also contain reports on the movements of citizens and the fate of a large number of those who disappeared during the Baath era.”

The source said “there are documents that talk about the Shiite religious institutions," adding, “The documents probably contain the names of a number of politicians or people who dealt with the Baath regime and are currently involved in political work.”

There have been concerns over the possible use of such documents to politically liquidate a number of officials or pursue political blackmail.

Such concerns were fueled by the possibility of such documents leading to a political and social crisis, especially if they disclose information related to the fate of thousands of people who disappeared during the Baath era and reveal some individuals’ involvement in harming them by ratting them out to the Hussein regime.

The Hoover Institute at Stanford University in the United States, which obtained the documents in 2005, established an electronic copy of the documents and published many of them on its website.

The National Commission for Accountability and Justice in Iraq is the main institution responsible for “intellectually, administratively, politically, culturally and economically dismantling the Baath Party system in Iraqi society, state institutions and civil society institutions.”

It is also responsible for compensating the victims of the previous regime, as per its law approved in 2008.

Similar to other officials, Basem al-Badri, the head of the commission, did not get information from Kadhimi’s office about the arrival or fate of the documents.

“There might be new documents,” Badri said. “But I do not think that such documents would make a big difference in holding those involved with the Baath regime to account because we have a large and basic database that has already been examined,” he added.

The law of the National Commission for Accountability and Justice stipulates the establishment of an archive that includes the files of the Baath Party and the former regime.

This same archive is supposed to contain documents coming from the United States, but Badri attributes the failure to establish the archive to this date to Iraq's security and political instability.

As a result, the government will keep the documents for itself. A source close to Kadhimi’s office said, “There is a building being prepared in the Baladiyat area (east of Baghdad) for the archives to be kept there.” But, the source added, “We still do not know if the building has been completed.”

“Frankly, there is no clear plan,” he said.

The source also indicated “there are concerns over the loyalists (pro-Iran armed factions) being exposed to the archive.”

“They (the loyalists) have a crisis of revenge for the archive,” as the archive contains sensitive information revealing their cooperation and ways of dealing with the Baath regime before pledging allegiance to the pro-Iranian regime after 2003.

Salim Hamza, a member of the Parliamentary Legal Committee, did not have any information about the documents. “I will ask the speaker of parliament about these archives,” he said.

The Baath archive is very important for the future of Iraq, especially with the emergence of new generations filled with nostalgia for Hussein’s regime. The absence of a plan to reveal the Baath archive and unveil its practices toward Iraqis will exacerbate this nostalgia.