Israelis, Palestinians both use demography as political tool

The aspirations of the political right to annex West Bank lands have never been more obvious, as reflected in this week’s stormy Knesset committee debate about Jewish-Arab demography. 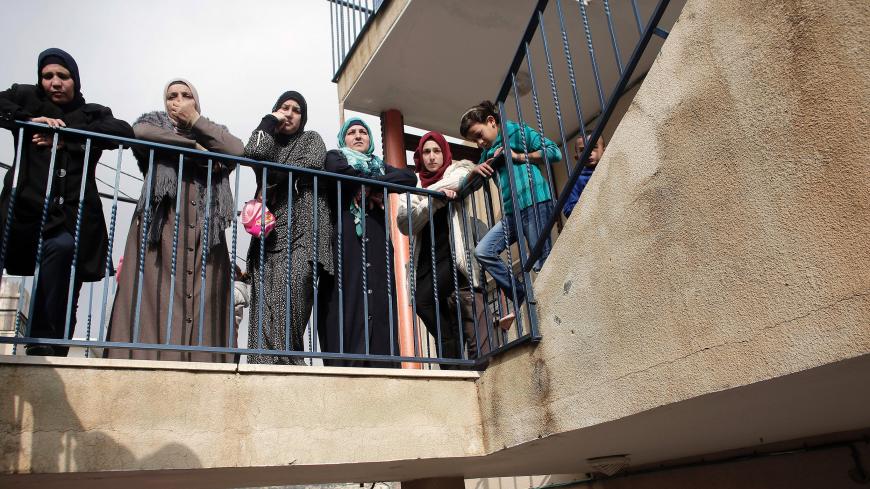 Palestinian women standing on a balcony look at the damaged interior of the home in the Palestinian neighborhood of Jabal Mukaber, East Jerusalem, Jan. 4, 2016. - AHMAD GHARABLI/AFP/Getty Images

The data cited this week in the Knesset by a top Israeli official would hardly have generated the storm it did were it not for the push by the Israeli right, mainly the HaBayit HaYehudi party, to annex West Bank lands and thwart the two-state solution.

At the March 26 session of the Knesset’s Foreign Affairs and Defense Committee, Col. Uri Mendes reported that according to official data compiled by the Palestinian Authority (PA), some 5 million Palestinians are registered in the West Bank and Gaza Strip. Mendes is the deputy commander of the Israeli Civil Administration, tasked with administering the daily life of Palestinians in the areas under Israeli control. The figures he cited, along with the number of Israeli Arab citizens and Palestinian residents of East Jerusalem, some 1.8 million according to the Israeli Central Bureau of Statistics, bring the total to 6.8 million Arabs living between the Jordan River and the Mediterranean. Israel’s Jewish population numbers slightly over 6.5 million.

These figures surprised Knesset members on the right. If implemented, their plan to annex West Bank lands to Israel would mean a clear Arab demographic advantage over Jews in a future binational state. It was therefore no surprise when Arab Knesset member Ahmad Tibi rushed to tweet, tongue in cheek, that the vision of an Arab prime minister in Israel was drawing closer. Tibi continued to joke at the expense of the right, saying that when he is prime minister, his government would “encourage Jews to flock to the ballot boxes in droves” — a reference to the scandalous warning by Prime Minister Benjamin Netanyahu on the day of the March 2015 elections that "Arab voters are coming out in droves to the polls." Tibi added that his government would also revoke the law allowing the screening of candidates for homes in certain communities, “so as not to hurt the Jewish minority.”

Committee Chair Avi Dichter of the Likud responded to the data by saying, “If the figure is correct, it is troubling. If it is not correct, we want to know what the precise number is, of course.” Committee member Moti Yogev of HaBayit HaYehudi claimed the figures were wrong and illogical. As far as he’s concerned, they are falsified or deliberately slanted. “In 2016, [the Palestinians] reported 80,000 births and 8,000 deaths — a life expectancy that doesn’t exist anywhere in the world,” he said.

Yoram Ettinger, a member of the American-Israel Demographic Research Group, which is dedicated to studying population data in Israel, the Gaza Strip and the West Bank, told Al-Monitor that Israel’s statistics bureau has not examined the population figures in the territories since December 1996. The government ordered it to stop doing so the following year, he said.

“From that moment on, the Israeli establishment has been echoing data reported by the Palestinians,” he said. Ettinger, who served as a senior Israeli diplomat in Washington, has been arguing for years that the demographic threat by the PA is false. He also opposes the conclusions of noted Israeli geographer Arnon Soffer, head of the Chaikin Chair in geostrategy at Haifa University, known for his apocalyptic predictions that an Arab majority would wipe out the Jewish state. Yogev, who heads a subcommittee on Judea and Samaria (the biblical names for the West Bank region), understandably cited figures that Ettinger regularly issues.

Ettinger claims that, according to Palestinian data, there are 1.85 million Palestinians in the West Bank and 1.5 million in Gaza. He explains the inconsistency between his figures and those presented by Mendes as stemming from the PA’s open inclusion of Palestinians who do not reside in the territories. “Already in the first census the Palestinians conducted in 1997, the head of the statistics office at the time, Hasan Abu Libdeh, said the count included 325,000 Palestinians who had been absent from the West Bank for over a year. For example, students at schools abroad or Palestinians registered as residents of the territories who are living permanently away from their lands,” Ettinger said.

Ettinger also claims the Palestinians inflate the number of reported births by including those outside the territories. To buttress his claim, his studies cite PA Deputy Interior Minister Hassan Alawi, who said in October 2014 in an interview with the Palestinian Ma’an news agency that the population figures issued by the PA include 100,000 births abroad.

The Israeli Civil Administration made no bones about the Palestinian source of the data it submitted to the Knesset, but failed to tell lawmakers that it has another database at its disposal. Every Palestinian living in the West Bank is logged into the Civil Registration’s records and those of the Shin Bet, and most residents of the West Bank carry a green identification card issued by Israeli authorities.

Thus, when demography becomes a political issue, any figure serves the needs of one side or another in the Israeli political arena. While the left warns against the loss of the country’s Jewish majority unless a Palestinian state is established alongside Israel, the right dismisses the demographic threat out of hand, arguing that it is based on fabricated data.

Ettinger does not hide his right-wing political leanings. “I tell those from the left wing who go to visit [Palestinian President Mahmoud] Abbas with their knees shaking over the demographics — drop this fraud of a ticking Arab time bomb. It doesn’t exist,” Ettinger said.

The argument over the data will likely persist, but one thing is clear: The struggle over right-wing aspirations to annex the West Bank has never been more pronounced than it was this week at the Knesset’s Foreign Affairs and Defense Committee.