Israeli Prime Minister Benjamin Netanyahu is fighting police investigations into corruption by delegitimizing the police and legal systems and by preparing for early elections. 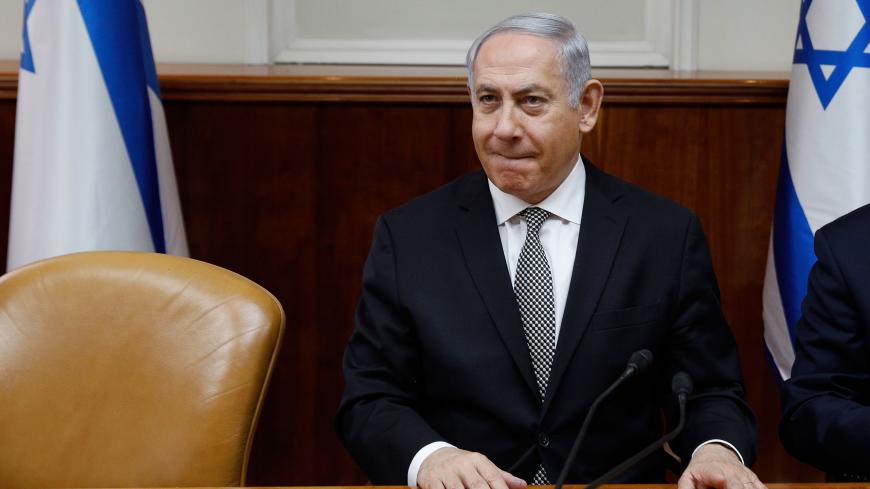 The ring of criminal investigations is closing in on Israeli Prime Minister Benjamin Netanyahu, leaving him very little room to maneuver. At this stage, most other people would throw up their hands and find a quick exit, if only to stay out of prison. Netanyahu continues navigating this stormy sea and planning his rescue strategy or, at least, planning some significant delay of the inevitable. As of now, Netanyahu’s strategy consists of three parallel components: questioning the legitimacy of the gatekeepers, particularly the police, the attorney general’s office and the media; tightening coordination with the US administration and creating the impression that when it comes to Israel’s relationship with US President Donald Trump, there is no alternative to Netanyahu; and holding a snap election to increase his strength or, at the very least, signal to the attorney general what the people really want.

Let’s start with the election. Netanyahu does not want to be seen as someone who is dragging Israel into a new round of elections just to save his skin, when he has a year and eight months until the end of his term in November 2019. This is why the serious coalition crisis that erupted this weekend was not only timely — it was exactly what he needed. The crisis revolves around a spat between Defense Minister Avigdor Liberman and the ultra-Orthodox Yahadut HaTorah party, led by Yaakov Litzman, over the enlistment law that is designed to exempt ultra-Orthodox youth from conscription. While the spat is making all the other members of the coalition nervous, Netanyahu has been able to maintain an unusually calm demeanor. According to a political source talking on condition of anonymity, Netanyahu has even informed his coalition partners that “if things don’t work out over the next few days, we will be forced to take it to the voters.”

On March 4, however, HaBayit HeYehudi seniors Naftali Bennett and Ayelet Shaked both announced that this was a “fake crisis.” They claimed that Netanyahu could resolve the crisis with a few phone calls, but that he isn’t interested in doing that. “The right will not get a better government, even after the elections,” Shaked warned.

This made it hard for Netanyahu on March 5 to stick to his plan to “go with and feel without,” namely, to keep a stable coalition while preparing for early elections. The criminal investigations closing in on him actually boosted his standing in the polls, while June seems like the perfect time for an election, since it will precede Attorney General Avichai Mandelblit’s anticipated decision to indict Netanyahu (or not). All of this would seem to be encouraging Netanyahu to let the country get dragged into an election. He will have to make his decision by the end of the week. But Israeli elections are always a dangerous enigma. The candidates may know how they go in, but they have no idea how they will come out, if at all.

At the same time, anonymous sources continue to deliver harsh blows to Israel’s gatekeepers and law enforcement, all in an effort to challenge their legitimacy. With the backing of several Likud Knesset members, along with Culture Minister Miri Regev, Netanyahu is trying to create the impression that these are largely political investigations, conducted under pressure from the media and the left. Despite the fact that the Israel Police chief and the public prosecutor are both Netanyahu appointees and considered close to the prime minister, many Israelis are convinced that the system is persecuting Netanyahu. After weeks in which the Israel Police in general and Police Commissioner Roni Alsheikh in particular have come under methodical attack, it is now Mandelblit’s turn. This began with a well-planned series of rumors on WhatsApp and continued with anonymous reports appearing on websites close to the prime minister.

According to these reports, Mandelblit could easily be pressured, or even extorted, over recordings in police possession. These 2010 Harpaz affair recordings could allegedly incriminate Mandelblit. Based on this information (which is apparently completely baseless), Mandelblit is worried about his personal affairs being made public. This refers to the period when he served as chief military advocate general, with the rank of major general. In other words, the motivations for his current actions have nothing to do with the case.

As if by magic, a report published in Israel on March 4, just a few days after this wave of rumors began, claimed the attorney general is considering a “devil’s advocate” staff in his office to lay out the arguments for not indicting Netanyahu in order to counter the arguments for indictment made by his regular, professional staff. As of now, it is unclear whether this decision has anything to do with the latest rumors facing Mandelblit. People close to him have been trying to assuage public fears by saying that he will not be influenced by rumors, gossip or unfounded reports. He continues to oversee the investigation, they say, steering its course with stable hands.

The third part of Netanyahu’s plan is a joint operation involving him and various US administration sources. There are those among the Israeli opposition who call this "Operation Saving Bibi.” It relies on the particularly close relationship between Netanyahu and Trump, as well as Trump’s son-in-law Jared Kushner; vital aid provided by US Ambassador to Israel David Friedman; and the unprecedented influence that Israel’s ambassador in Washington, Ron Dermer, has on senior administration officials, among them Kushner. This facet of the operation is credited with advancing the US Embassy’s move from Tel Aviv to Jerusalem, reportedly to May, and the meeting between Netanyahu and Trump on March 5. The underlying principle of this strategy is to convince the Israeli public that the prime minister wields enormous influence over Trump, and that their special, close relationship has been advantageous to Israel in many ways, chief among them the decision to accelerate the embassy’s move to Jerusalem.

Netanyahu is well-aware that moving the US Embassy to West Jerusalem has no real operational importance. It is merely a propaganda event intended to make a statement. Yet this does not prevent him from getting as much leverage as possible from the move and pushing the move date up to Israel’s Independence Day this May. The timing fits perfectly with talk of advancing the election to June, if that actually happens. As far as Netanyahu is concerned, the timing would be ideal. The election would take place right after Independence Day, which will include the traditional series of propaganda events in the national consensus and under the prime minister’s aegis, and also the embassy move. The timing could enable him to win a record number of Knesset seats and to signal to law enforcement that the people are behind him, regardless of any progress in the investigations.

At this stage, it is hard to tell how much of this multistage plan will actually be realized. Netanyahu knows that even if there is an election and he comes out stronger, it will not stop the investigations from proceeding full steam ahead. Furthermore, there is no connection between the number of Knesset seats or popularity in the polls and the police investigations and criminal activities. Case 4000 — which looks at Netanyahu’s relations with communication mogul Shaul Elovitch — should end the police saga and provide Mandelblit with the critical mass needed to indict Netanyahu. The prime minister also knows that even though the law does not address this scenario, there has never been a prime minister who remained in office while being tried for criminal activity in all of Israel’s history.

Nevertheless, Netanyahu keeps fighting. That’s what he is made of. He will never give up. He will never surrender. When it comes to his personal interests, there is no such thing as going too far. His supporters and associates have no qualms about casting aspersions and disparaging Israel’s official institutions, including its entire law enforcement system, just to help the boss escape.