No end to Yemen war in sight as Saudi Arabia, Iran lock horns

The war in Yemen drags on even as it continues to bleed Saudi Arabia while increasing international pressure on Iran. 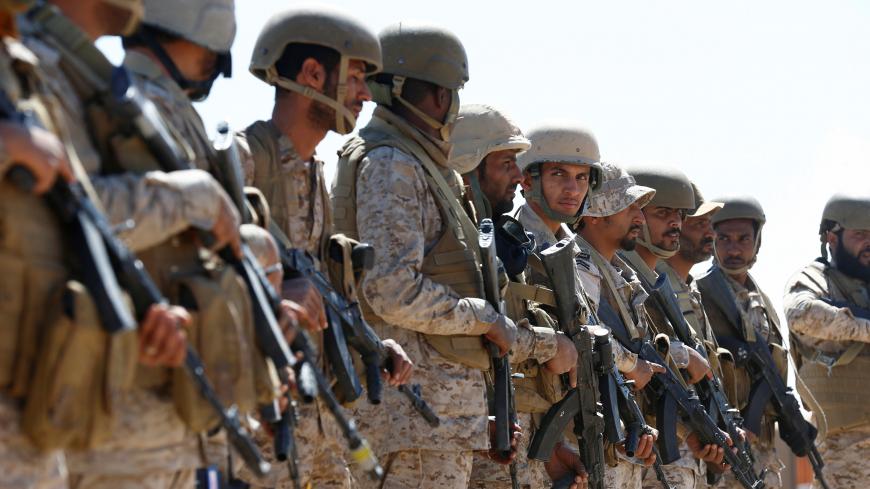 As the Saudi-led air campaign in Yemen nears its third year, the war doesn’t seem to be coming to an end anytime soon. The internal strife between Iranian-backed Ansar Allah, more commonly known as the Houthi movement, and the Saudi-supported government of President Abed Rabbo Mansour Hadi is no longer at the core of the struggle. Rather, the center lies in the heart of the broader confrontation between Iran and Saudi Arabia. In this battle, the Saudis are ready to raise the stakes and continue their war even as the desired outcome remains elusive. Meanwhile, the Iranians are much more comfortable seeing their bitter rivals drowning in the Yemeni quagmire. At the same time, Iran is coming under international pressure that is bringing its ballistic missile program under scrutiny.

While many might ask whether Tehran and Riyadh might one day head toward a win-win regional settlement, the outcome of the Yemeni war is proving day after day that both sides are not winning but are rather mired in a lose-lose situation that is draining the two regional powers in different arenas. Nonetheless, Saudi Arabia is the one paying more money and is directly involved in the war, while Iran’s main cost in Yemen is the additional international pressure for backing its Ansar Allah allies with weaponry and expertise without being directly involved in the fight.

The main Saudi problem in the Yemeni war remains the lack of new strategies and tactics; the mounting number of civilian casualties, which is becoming a human rights nightmare for the kingdom and its Western allies; and the fact that many other wars are being fought in parallel, prompting a recent report by Chatham House to warn that Yemen has become a “chaos state.” A March 6 report by the United Nations High Commissioner for Refugees (UNHCR) explained that the Yemenis are facing multiple crises, including armed conflict, displacement, risk of famine and the outbreaks of diseases including cholera — creating the world’s worst humanitarian crisis. The report stated, “An escalation of hostilities in late 2017 resulted in new displacement, precluded safe return and increased demands on UNHCR’s emergency response capacity, with more than 2 million people displaced. Protection space for 280,000 refugees and asylum seekers also continues to shrink, resulting in severe protection gaps. Refugees are at heightened risk of exploitation in the absence of livelihood opportunities and increasing aid-dependency.”

Saudi Arabia’s Crown Prince Mohammed bin Salman regards the Yemeni war as his own, and any success thus as his signature. Conversely, any failure will put a dark stain on his credibility as a leader aiming for the throne. To the Iranians, the more the Saudis are stuck in the quagmire, the more Prince Mohammed will be vulnerable, and this will have a bigger implication on the Saudi role in the region, which Iran sees as floundering. To Tehran, the latter was clearly reflected in the ongoing Gulf crisis with Qatar, the alleged forced resignation of Lebanese Prime Minister Saad Hariri while in Saudi Arabia last November, and the attempt in Yemen to divide former President Ali Abdullah Saleh from Ansar Allah, which ended tragically with the Houthis killing their former ally.

Tehran’s official stance on the war in Yemen has been reflected on several occasions by its officials, mainly Foreign Minister Mohammad Javad Zarif, who has reiterated on several occasions that his country has suggested a four-step initiative to solve the crisis, consisting of an immediate cease-fire, humanitarian aid, intra-Yemeni talks and the formation of an inclusive government. During the Tehran Security Conference in January, Zarif explained Iran’s take on the Yemeni crisis, saying, “The continuance of aggression against the oppressed people of Yemen, including indiscriminate aerial raids and extensive war crimes against civilians, is another major source of tension in the region. Following 33 months of a senseless bombing campaign, the aggressors should have realized by now that this crisis has no military solution and the parties to it have no way out other than engaging in dialogue to reach a national consensus to resolve the crisis.”

In this vein, Tehran University professor Mohammad Marandi pushed back Saudi and US claims that Iran is militarily involved in Yemen, telling Al-Monitor that it’s physically impossible for Tehran to be engaged in the smuggling of ballistic missiles. He said, “Taking into consideration the Western-backed Saudi siege, which even prevents food from entering Yemen, when I see the Yemeni resistance fighting the Western-backed Saudi aggressors with bare feet, it is obvious that the reason the Saudis have failed isn’t the foreign support for Ansar Allah but rather their [Ansar Allah’s] will to resist a much powerful yet unjust brutal force.”

A UN Security Council resolution on Yemen proposed by Britain that sought to specifically condemn Iran was vetoed by Russia on Feb. 26, preventing the international body from singling out the Islamic Republic. Marandi added, “Western powers are guilty of the war crimes committed in Yemen because they are the ones providing the Saudis with the war machine that’s being used to kill the people of this poor country. Their attempts are basically to distract people’s attention from the war crimes; they want to portray Iran as the force behind the problem in Yemen while, in reality, the problem isn’t Iran — not even Ansar Allah. It’s the massacre and the deteriorating humanitarian situation.”

Despite the differences over who or what should stop first — whether the Saudi-led air campaign or the Iranian role in supporting Ansar Allah — it is clear that the endgame in Yemen does not seem to be near. The only thing obvious in this struggle is that more Yemenis will die while the whole world is watching.