In Tehran, the reaction to the appointment of Pompeo as secretary of state is an increasing sense that Trump is bent on withdrawing from the nuclear deal. 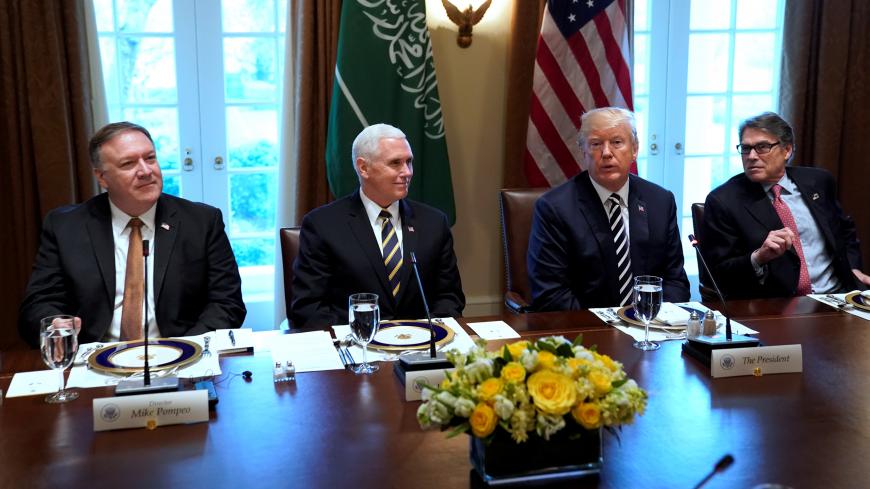 “You’re going to see what I do,” said US President Donald Trump on March 20 when asked about his chosen course of action on the sanctions waivers due May 12; the waivers must be signed to prevent a US violation of the nuclear deal with Iran. The comments came as he received Saudi Arabia’s powerful Crown Prince Mohammed bin Salman at the White House, giving an impression that the US president is heading toward nixing the deal with Iran. In fact, there are many reasons to believe the landmark accord is heading toward an unhappy ending, at least when it comes to US adherence to it. In this vein, the recent appointment of Mike Pompeo as the new secretary of state has enhanced this notion around the world and in Iran in particular.

The view of Pompeo is very skeptical in Tehran; the fact that he’s highly critical of the Islamic Republic is the foundation of the concern. But his experience as CIA director adds to the apprehension and creates an atmosphere of uncertainty toward the future not only about the nuclear deal but regarding the matter of broader stability in the region.

The first Iranian official to indirectly comment on Pompeo’s appointment was Foreign Minister Mohammad Javad Zarif, who tweeted March 13 that Trump has made a habit of being unpredictable and thus unreliable for anybody to engage with. Zarif tweeted, “Nobody will be interested in reaching any agreement with the White House if US signature only good for 4-8 yrs.”

Zarif’s comments were reiterated by Foreign Ministry spokesman Bahram Qassemi, who told the Lebanese daily Al-Akhbar that Iran views the appointment as an internal US issue "but if we want to study the issue, the world knows Trump’s weird ways and surprising decisions; therefore, his decision to dismiss his secretary of state wasn’t surprising.” Qassemi elaborated on the decision, saying that the world is getting used to the fact that Trump “takes his foreign policy decisions in a unilateral and selfish way and announces them through social media [such as on] Twitter. Sacking the foreign minister of a state that presents itself as the leader of the world, without previous notice, and during a foreign trip, doesn’t imply political understanding or wisdom; it’s interesting that this is the 42nd firing in only 14 months. This is unprecedented.”

As such, to Iran, there’s nothing to suggest that the United States is going to stick with the nuclear deal, with Pompeo’s nomination appearing as if it’s the final big announcement before Trump does what he wishes to do in May. Iranian journalist Abbas Aslani told Al-Monitor, “By appointing Pompeo, Trump will try to make his threat on his withdrawal from the JCPOA [Joint Comprehensive Plan of action] seem a credible and believable threat. By making this threat more credible, he wants to gain more on imposing sanctions against Iran and making some changes to the nuclear deal. But if he cannot get what he wants, like making changes to the JCPOA, his withdrawal from the nuclear deal is not unlikely. But after all, I don’t think his threats can make Iran compromise on the missile issue.”

Aslani said there is a common Iranian view that Pompeo will make US foreign policy toward Iran more radical and hostile. “He has been very outspoken against the nuclear negotiations and also the deal. Compared to Tillerson’s tenure, the State Department under Pompeo will use more pressure on Iran. In other words, Pompeo’s presence in the State Department will be less diplomatic than the past," Aslani said.

Less diplomacy from the US side appears set to push the Iranians toward harder positions in response. Here, the question is whether this would ultimately lead the United States to opt out of the deal while other signatories keep adhering to it.

Indeed, there is still lack of clarity over how the deal will look if the United States withdraws. To Iran, the real guarantee for the continuation of the deal is the commitment of the remaining parties, but there are concerns in Tehran that Pompeo’s aggressive approach toward Iran might help create greater pressure on Iran’s regional role and involve the other JCPOA parties in such pressure — perhaps leading to rifts with Tehran. Still, it should be noted that Pompeo, as CIA chief, did move to send a direct letter to an Iranian major general. Last year, it was revealed that Pompeo had sent Quds Force commander Qasem Soleimani a direct message. “What we were communicating to him in that letter was that we will hold he and Iran accountable for any attacks on American interests in Iraq by forces that are under their control,” Pompeo told a panel at the annual Reagan National Defense Forum in Southern California on Dec. 3. According to Pompeo, “We wanted to make sure he and the leadership in Iran understood that in a way that was crystal clear.”

But Soleimani declined to receive the letter, Mohammad Golpayegani — a senior aide to Supreme Leader Ayatollah Ali Khamenei — told Iranian press, adding that an unnamed CIA contact had tried to give a letter to Soleimani when he was in the Syrian town of Albu Kamal in November during the fighting against the Islamic State. According to Golpayegani, Soleimani responded by saying, “I will not take your letter nor read it, and I have nothing to say to these people.” The question is whether the same dynamic with the Iranians will be repeated when and if Pompeo becomes confirmed as the new US chief diplomat.