Iranians see Trump as dangerous — but to Iran or the US?

Given the harsh rhetoric of both Donald Trump and Hillary Clinton toward Iran, which candidate do Iranians prefer to be the next US president? 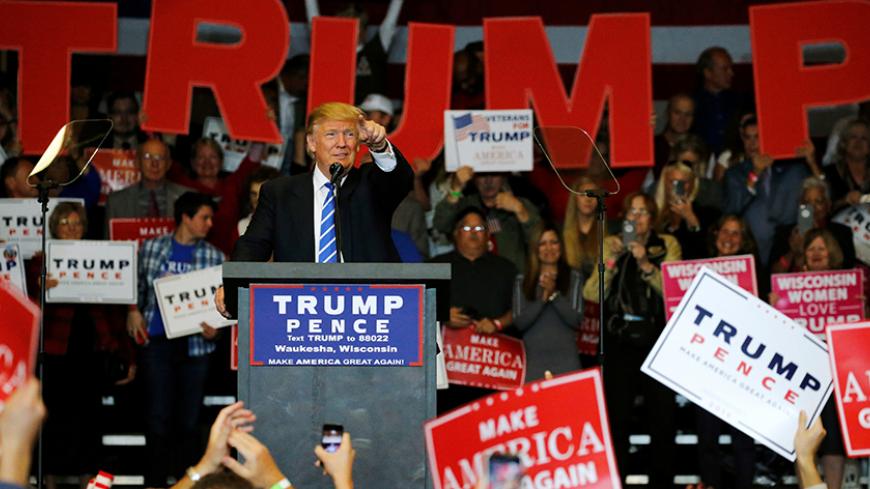 TEHRAN, Iran — When US presidential candidates Hillary Clinton and Donald Trump went head to head in their first debate on Sept. 26, Iran took up a significant part of the foreign policy discussion. During the debate, Republican Trump challenged Democrat Clinton’s policies while serving as secretary of state 2009-2013, saying, “You started the Iran deal. That’s another beauty where you have a country that was ready to fall; they were doing so badly. They were choking on the sanctions. And now they’re going to be actually probably a major power at some point pretty soon, the way they’re going.”

The former first lady, however, defended the nuclear deal with Iran. She said, “When I became secretary of state, Iran was weeks away from having enough nuclear material to form a bomb. … I spent a year and a half putting together a coalition that included Russia and China to impose the toughest sanctions on Iran. And we did drive them to the negotiating table. And my successor, John Kerry, and President [Barack] Obama got a deal that put a lid on Iran’s nuclear program without firing a single shot.”

Looking back at Clinton and Trump’s Iran-related remarks over the past few months, both in the preliminary debates or in their campaign speeches, it becomes evident that neither's tone is soft toward Iran the way Obama's has been. But which of the two do Iranians see as the better option?

Nasser Hadian, a prominent professor of international relations at Tehran University, told Al-Monitor, “At a first glance, it might seem as if Trump is the worst option for Iran mainly because he is constantly talking of dismantling the [Joint Comprehensive Plan of Action, or JCPOA]. He threatens Iran, talks of the damages [to US interests] of the nuclear deal or the need to attack and destroy Iranian boats in the Persian Gulf. But if we look at the bigger picture, Trump can first of all jeopardize the legitimacy of the US global dominance and this might be more favorable for Iran. Even today, you see many high-ranking Republicans who are willing to vote for Clinton so that Trump doesn’t win because in US society as well as in the international arena, Clinton is viewed as a reasonable individual.”

But how can one consider Trump the better option when he continually attacks the JCPOA? In his speech at the Republican convention July 21, he described the agreement as one of the worst deals in US history. Can Trump really dismantle the landmark accord with Iran? In June, the White House emphasized that no one — including a potential President Trump — will have the power to tear up the nuclear deal. Iran’s Foreign Minister Mohammad Javad Zarif reaffirmed this position while attending a session of the French Senate Committee on Foreign Affairs, Defense and Armed Forces in June and said that the JCPOA was not an agreement between Iran and the United States alone.

In an interview with Iran’s Khabar Online in September, Mohammad Reza Takhshid, dean of the Faculty of Law and Political Science at Tehran University, said, “Of course, we should differentiate between the comments these candidates make during the primary and final rounds [of the elections] and when they enter the White House. Some of these remarks should not be taken too seriously. But it is obvious that Trump is an unpredictable person, and this unpredictability can be to both Iran’s advantage and disadvantage. This is while Clinton will remain committed to Obama’s legacy on Iran, although she might impose new sanctions against Tehran over its missiles or human rights. But these sanctions will not be so much as to make Iran forgo the JCPOA. I also believe that Clinton will do everything in her power to maintain the JCPOA.”

There is a wide range of opinions in Iranian society about what may lie ahead. Following the first presidential debate, Khabar Online asked its readers to express their views. One user identified as “Iman” wrote, “I hope Trump will become US president. The anti-Iran sanctions were designed by Clinton and [the Islamic State] was created by Clinton and the Democrats to maintain the regional balance of power. On the other hand, the Republicans brought the downfall of Saddam Hussein and the Taliban. They also put more pressure on Saudi Arabia. Choosing Trump as president will engage the United States and Americans in an internal fight for four years.” Meanwhile, another anonymous reader wrote that he believes Clinton and Trump would be the same for Iran and pointed out, “The US’ animosity toward Iran has always continued, and it makes no difference who ends up in the White House. Whoever comes will pursue the path of animosity with Iran.”

Hadian, the Tehran University professor, said, “The chance of Hillary Clinton winning is much higher than Trump, and she will pursue a tougher line than Obama in regard to Iran and the JCPOA.” In a July interview with Khabar Online, former Iranian Deputy Foreign Minister Abbas Maleki said, “Mrs. Clinton does not know much about Iran and has no interest to know much, either. It is natural that under such circumstances she cannot have a clear comprehension of Iran. This is while Mr. Kerry, for instance, knows Iran.”

Commenting on the suitability of Clinton in the eyes of Tehran, Iran's former ambassador to Germany Hossein Mousavian said at Princeton University in June, “She has stated that the worst US sanctions against Iran were imposed during her time as secretary of state. Therefore, if she wants to follow this policy, the answer is clear.” Mousavian added, “And the Republicans are after more animosity.”

As such, it appears that there is no consensus among Iranians as to whether they prefer Clinton or Trump. While Iranians believe Kerry had a more influential role in making the JCPOA a reality than Clinton did, they do believe that Clinton will not turn her back on Obama’s legacy. However, they also know that if Clinton wins, she will likely pursue a policy of offense rather than defense toward Iran.

There’s a similar ambiguity surrounding Trump. Some in Iran believe that his threats should not be taken seriously. Given his view that US foreign policy should be less interventionist as well as his interest in trade and doing business, he could turn out to be a better option for Iran. Others argue that with the blow he will likely deal to America’s global standing, he will tarnish the prevailing international consensus against Iran. Yet, there are those in Tehran who do take Trump’s threats seriously — and they are not a small number. They believe that a Republican win in the polls will even threaten the nuclear deal.