Barack Obama’s departure from the White House leaves Iranians divided about his legacy, with some calling his presidency a "great opportunity for Iran that is now gone." 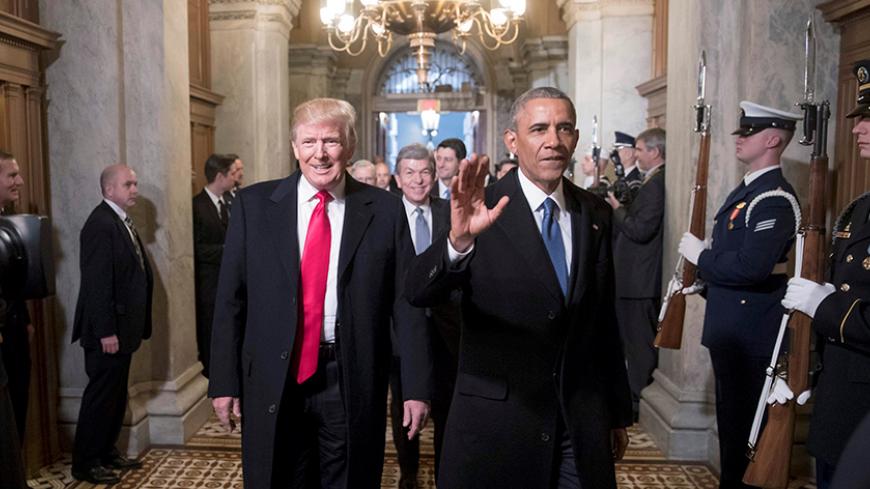 As Barack Obama left the White House on Jan. 20, transferring power to Donald Trump, assessments were made about his legacy and whether he fulfilled his promises. To Iranians, one of the most noted of these pledges was the focus on diplomacy to resolve the stalemate over Iran’s nuclear program.

In an August 2007 speech at the Woodrow Wilson Center, Obama had said that “not talking does not work” and suggested that the United States engage in dialogue with adversaries Iran, North Korea and Syria. Obama had also promised that by talking to Iran, he would be able to resolve differences.

Unfortunately, his first term in office coincided with that of Iran’s hard-line former President Mahmoud Ahmadinejad, and thus, there was no practical breakthrough in the row over Iran’s nuclear program. But when President Hassan Rouhani took office in 2013, things took a turn for the better. Nuclear negotiations between Iran and the six world powers accelerated with a particular focus being placed on Iran-US dialogue. These talks ultimately led to the signing of the Joint Comprehensive Plan of Action on July 14, 2015.

In an interview with Al-Monitor, Nasser Hadian, a prominent professor of international relations at Tehran University, said, “Obama wanted to resolve the other remaining issues between Iran and the United States [as well]. However, Iran was neither prepared nor interested in this.”

He added, “At the same time, Obama knew that if he could succeed in solving things between the two countries, it would be a positive mark on his report card and he would be remembered as the sole US president who was able to put an end to the crisis in Tehran-Washington relations after nearly three decades — a commendation that was even more valuable than solving the conflict with Cuba.”

In Iran, there have been widely divergent views about Obama’s approach. The Kayhan daily, which epitomizes the movement opposed to restoring relations with the United States, published a piece Nov. 19 in which it evaluated the performance of various American presidents. With reference to Obama, the hard-line daily wrote, “By using the politics of smiling amid [engagement in] terror, Obama pursued the same path that other former US presidents had taken with regard to Iran, and by imposing various wide-ranging sanctions — whether in the nuclear arena or in regard to terrorism and human rights — he showed that there was no difference between Republicans and Democrats when it comes to Iran. This is not to mention the danger that Obama posed by winning international consensus on the implementation of his wide-ranging sanctions over Iran’s nuclear program."

In this vein, Ali Akbar Velayati, the foreign policy adviser to Iran’s supreme leader, said in an interview with Jam-e Jam daily June 11, “Obama is no different than [George W.] Bush. US policies have always been in support of Israel while opposing Iran and the Muslim world.”

He added, “Some say the Democrats are better for Iran while the principal sanctions against Iran were imposed during Obama’s term in office. The only difference between Obama and the other US presidents is that he speaks nicely and some think he is a better person.”

However, Obama did have one unique experience in regard to Iran: the historic phone call he had with his Iranian counterpart. Taking place at the very end of Rouhani’s first visit as president to New York to attend the United Nations General Assembly in September 2013, the conversation was the first between an Iranian and an American head of government since Iran’s 1979 Islamic Revolution.

For Rouhani, the phone call was followed by harsh domestic criticism. In addition to being reprimanded by some members of parliament, Iran’s supreme leader also hinted at his disapproval of the move. In comments made on Oct. 5, 2013, Ayatollah Ali Khamenei said, "I support the government's diplomatic moves, including the New York trip, because I have faith [in it]. … But some of what happened during the New York trip was not appropriate. … I am skeptical of the Americans and have no trust in them at all. The American government is untrustworthy, arrogant, illogical and a promise breaker.”

Notwithstanding the historic phone call, Iranians have broadly held two widely differing views about Obama. One group thought he was no different than previous US presidents, while others saw him as an opportunity for Iran. Hossein Mousavian, a former spokesman for the Iranian nuclear negotiating team, said on Jan. 2, 2016, “Some may think what I say here is foolish but the reality is that Obama has been an opportunity for Iran and still is and this [opportunity] should be used for solving differences between the two nations.”

Many in Tehran agree with this assessment. In an interview with Al-Monitor, Sadegh Zibakalam, a prominent political analyst and Tehran University professor, said, “Obama was a great opportunity for Iran that is now gone. The combination of Obama, [Vice President Joe] Biden, and [Secretary of State] John Kerry played a great role in reaching the nuclear deal, and after Obama’s successor takes office we will realize what a great opportunity we lost to resolve our differences with the United States.”

Foreign Minister Mohammad Javad Zarif, who served as chief nuclear negotiator, noted Feb. 16 that it would have been much more difficult to achieve the nuclear deal without Obama and Kerry in office.

As such, when it comes to US relations with Iran, Obama has left the White House with a valuable legacy: the nuclear deal, which resolved a crisis that at one point seemed unsolvable. And while far from all share the same view of his performance when it comes to Iran, there is consensus that if he and Rouhani had not been in power in Washington and Tehran at the same time, reaching a nuclear agreement would have been much harder than it was.