Although more than $5 billion was pledged by international donors to help rebuild the Gaza Strip after the 2014 war, much of the plan to revitalize the coastal enclave has gone unimplemented. 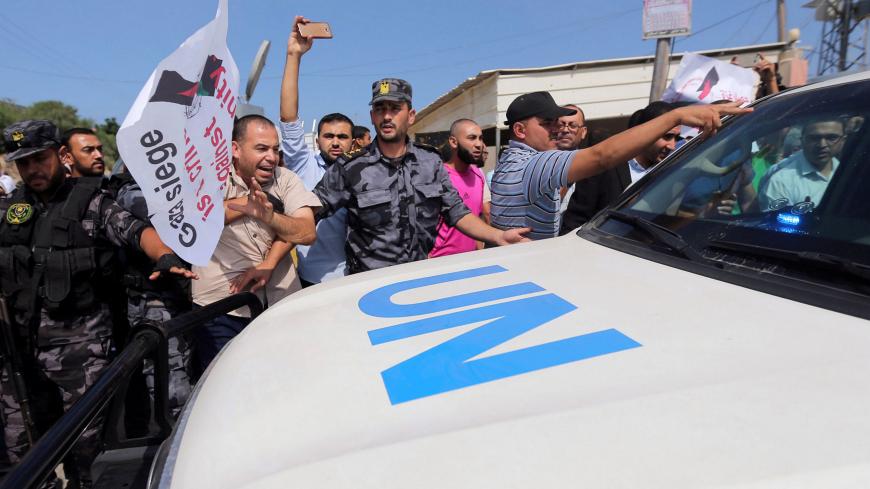 UN special coordinator for the Middle East peace process Nickolay Mladenov announced in a Feb. 15 statement that the Palestinians and Israelis have reached an agreement on reviewing the reconstruction plan of the Gaza Strip in place since 2014, so as to effectively repair the damage caused by the Israeli war on Gaza the same year.

Miladinov’s statement followed a meeting in Ramallah on Feb. 14 with Palestinian Prime Minister Rami Hamdallah and the Israeli Coordinator of Government Activities in the Territories Maj. Gen. Yoav Mordechai to discuss the possibility of alleviating Israeli restrictions on Gaza and speeding up the reconstruction process.

“Today — three years into the reconstruction plan — only 60% of buildings have been reconstructed as Israel does not allow most building materials into the Gaza Strip. This has caused the construction process to break down, harming the Palestinian companies and inflicting major losses of millions of dollars on the economy,” Mohammed Abu Jiab, the editor-in-chief at Al-Eqtesadia newspaper in Gaza, told Al-Monitor.

Egypt had organized the Cairo Conference on Palestine – Reconstructing Gaza following the destruction of the coastal strip by the Israeli attacks in the summer of 2014, and $5 billion was pledged to the Palestinians, of which $3.5 billion was allocated for rebuilding the Gaza Strip. Of 53 countries and entities participating, only 28 were fully committed to their pledges, including Qatar, Saudi Arabia, Kuwait, the United States, the European Union and Turkey.

Atef Adwan, head of the Economy Committee in the Palestinian Legislative Council, told Al-Monitor, “The talk about the United Nations changing its reconstruction plan for Gaza has one main reason: Israel fears that the situation in Gaza might explode because of the dire conditions and the decline in living standards. Israel could have pressured the UN to speed up the reconstruction plan, not out of love or empathy for the Palestinians, but out of fear of a Palestinian revolution that might spill into Israel.”

The international community seems to have realized that the rebuilding plan for the Gaza Strip needs to be reviewed and then at the least reformulated so that Israel is bound to allow all construction materials into Gaza. This is especially true in light of the growing Palestinian discontent with the plan, which prompted protests calling for the plan’s abolition after major delays in implementation; these holdups have been widely criticized in the Palestinian media.

“It is necessary to end rather than review this plan as it has replaced the Israeli blockade with a UN siege on Gaza. The entire process is slow and very expensive with dozens of international experts being paid obscenely large salaries, and expensive monitoring programs and mechanisms to check the destination of every cement bag to ensure that nothing is being used by Palestinian factions for other reasons — upon the directives of Israel,” Omar Shaban, the head of the Gaza-based Pal-Think for Strategic Studies, told Al-Monitor.

“I met with President Mahmoud Abbas in Ramallah on Sept. 17, 2014, and talked with him about the danger of the [plan’s] mechanism. The plan is a failure and is costing Palestinians a lot. It should be canceled altogether,” Shaban said

Private sector institutions in the Gaza Strip called in a Feb. 20 statement for the cancellation of the plan, describing it as a failure that contributes to the promotion of the siege on Gaza under UN auspices. The statement noted that the amount of cement brought into Gaza between October 2014 and the end of December 2017 does not exceed 2 million tons, only 30% of Gaza’s needs for the same period.

A senior Palestinian employee at one of Gaza’s international nongovernmental organizations told Al-Monitor on condition of anonymity, “Many international institutions working within the framework of the UN plan expressed dissatisfaction with the slow reconstruction process. It should be noted also that the plan has expanded to include comprehensive construction projects of new houses, but with the same delays in implementation.”

It has been three years since the Gaza reconstruction plan was launched, yet no major breakthrough has been made. Construction materials have not been flowing into Gaza in sufficient amounts to meet the rebuilding requirements, as Israel has tightened its grip on the border crossings for fear of such materials being used for other purposes, mainly the building of tunnels by Hamas.

“There are 100,000 housing units that were partially or completely damaged in the last Israeli war on Gaza. Revising the UN rebuilding plan or finding a better alternative would open doors to 300 Palestinian construction and contracting companies. This is not to mention job opportunities for 70,000 technicians and professional construction workers,” Nabil Abu Muailaq, former head of the Palestinian Contractors Syndicate in Gaza, told Al-Monitor.

“In addition, due to the plan’s security and technical procedures, 130 companies with contracts in the reconstruction of Gaza stopped their projects. With these policies in place, the construction process is likely to drag on for 20 years,” he said.

It has become clear that the requirements for the rebuilding of the Gaza Strip necessitate reconsidering the UN plan that has been in force for more than three years now. The Palestinians believe that the plan has institutionalized the Israeli blockade and is prolonging the construction process for many years to come. As a result, the international community is calling for a new plan that would take the complaints of the Palestinians into consideration and speed up the entire process.