Are NGOs in Palestine up to the challenge?

Civil society institutions in Palestine, which are in charge of documenting violations and providing aid for development projects, have recently come under criticism for failing to rid the Palestinians from the oppressive Hamas and Fatah regimes. 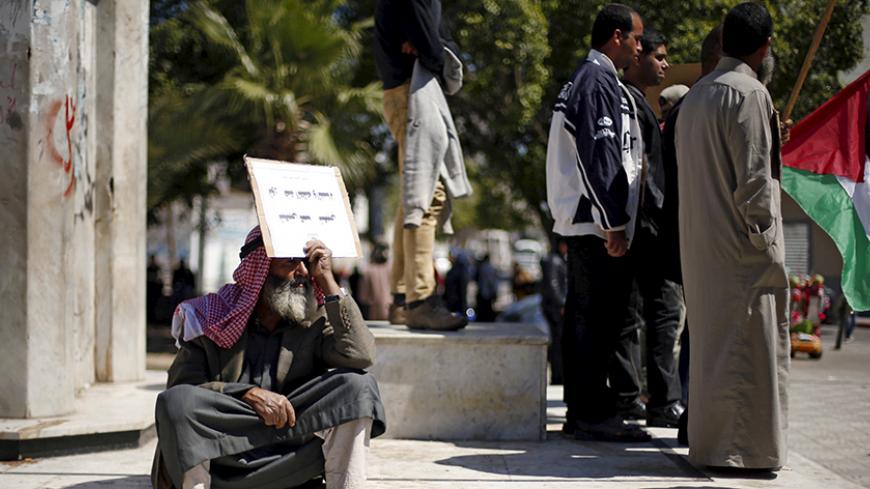 A Palestinian man rests as others take part in a protest calling for better living conditions, in Gaza City, Gaza, April 2, 2016. - REUTERS/Suhaib Salem

Civil society and nongovernmental organizations (NGOs) in both the Gaza Strip and the West Bank have failed over the past decade to influence the Palestinian street and put an end to division or to topple the two ruling parties behind the division, namely Fatah and Hamas — even though they are the cause behind the deterioration of living conditions and the growing violations of human rights.

This raises questions about the role these institutions should play, the limits of their intervention and their pursuit of democracy and change, as they receive foreign funding. According to official government estimates published by the Palestine Economy Portal in January 2016, these funds amounted during the first nine months of 2015 to $800 million.

Amjad Shawa, director of the Palestinian NGOs Network in the Gaza Strip, believes that these questions and demands undermine the role played by NGOs. “We cannot ask them to do what is beyond their capacity under a weak state or authority and amid the Israeli occupation,” he told Al-Monitor. He pointed out that these institutions will never be a substitute for the state, as a strong civil society infers a strong state and vice versa.

“Amid the deteriorating situation in Gaza and the ongoing siege, people's needs are increasing due to poverty, unemployment and food insecurity. In addition to democracy, human rights, agriculture and water projects, civil society organizations are now asked to provide relief. This is why the amount of money that is mentioned is little amid the escalating crisis,” Shawa said.

Atef Abu Saif, author of “Civil Society and the State,” said that despite the great effort made by NGOs, neglect continues to result from two main reasons. The first is the international funding agenda, which is not determined by local partners but by foreign experts and is subsequently not based on local development policies. The second, according to Abu Saif, is related to the elitist nature of Palestinian civil society, which makes NGOs distant from the needs of the people.

“A simple comparison between the millions received by giant institutions in Ramallah and Gaza and the little money received by institutions working in marginalized camps, villages and neighborhoods is quite revealing in this context,” he added.

In an article published by economic expert Omar Shaban, director of Pal-Think for Strategic Studies, on the foundation's website on Aug. 16, he wrote, “The Palestinian civil society did not stand silent or neutral facing the repercussions of the damned division. It has continuously offered ideas and made efforts to put an end to division, although these efforts were sometimes underestimated and fell prey to the split, blockade and marginalization.”

In the same article, Shaban said, “The absence of a national fund dedicated to supporting the efforts and initiatives of civil society organizations prompts some of these to rely on international grants — some of which have their own agenda that does not necessarily go in line with the Palestinian development goals.”

Most NGOs, including feminist and human rights organizations, receive funding from foreign parties due to the lack of a dedicated national fund supported by the government or Palestinian parties. Shaban suggested in his article following the example of the German experience, saying, “NGOs must receive bigger domestic funding so that their dependence on international funding is reduced. The German experience is a great example in this context, as the German Foreign Ministry allocates budgets for all of the political parties’ development bodies to support their work both inside and outside the border.” Shaban suggested the creation of a national fund that allocates financial budgets to professionally support the efforts of these organizations.

Asked about the inability of these institutions to get rid of the West Bank and Gaza’s governing political system — whose electoral term ended in January 2010 — and whether such inability was due to the NGO’s weakness or to their complicity with the authorities, Shawa said, “Civil society is not complicit with any of the parties to the [Palestinian] division, and it has loudly criticized them using the civil society tools — namely democracy, figures, events, workshops and demonstrations, and even mediation, which these institutions sponsored between the two parties.”

He stressed that these institutions play a major reformist role in the health and electricity sectors at a time when the two authorities of the West Bank and Gaza refuse to communicate with each other, especially in light of the absence of the role of the Palestinian Legislative Council.

Shawa revealed that “there is negligence in monitoring the performance of the two ruling parties in the West Bank and Gaza because they are simply the ones monitoring these institutions.”

Abu Saif believes that getting rid of the Hamas regime is probably not among the priorities of civil institutions. “This raises an important question: Why didn’t the civil society organizations develop strategies against the repressive policies? Isn’t it their duty to protect rights and confront the ruling authority when it encroaches upon individual space? Civil society seems to be in solidarity with the ruling power. It may criticize it, but it surely does not confront it,” he told Al-Monitor.

Asked about the role of these institutions on the ground, Abu Saif said that it can be boiled down to continuing to exist, as they are unable to develop genuine approaches to their role. “The ideal and proper role is to protect the space between the state and the individual and prevent any encroachment in this regard, but this is not happening.”

Shaban voiced a different opinion, saying, “On the contrary, these organizations play a significant role in the protection of human rights, reconstruction and exposure of corruption.”

He added, “Some of them might have been bought by the regime, and some of them might have been forced to remain silent and neutral given their need for funding. Also, civil society has lost many of its figures and much of its cohesion and collective responsibility, but the situation in the West Bank and the Gaza Strip is disastrous and there are big problems that need to be faced. Division has widely undermined the civil society’s capacity to influence.”

Shaban pointed out that it would not be fair to disregard the role played by these institutions knowing that they have set a lot of laws to protect women and rehabilitate young people, and they condemned the arrest of political detainees, the suppression of freedoms and the freezing of the democratic process.

Human rights organizations in the Gaza Strip, such as the Palestinian Center for Human Rights and Al Mezan Center for Human Rights, periodically document violations related to freedom of opinion and expression, political arrests, the killing of women against the backdrop of the so-called “honor crimes,” or the security services’ dispersion of peaceful gatherings in the West Bank and Gaza Strip. Also, the Coalition for Integrity and Accountability monitors the transparency of the work of the government, the ministries and the NGOs.

Ayman Ayesh, general manager of Public Affairs and NGOs in the Hamas Interior Ministry, refused to use the word “complicity” to describe the relationship of NGOs with them. “The relationship has evolved over the past years through serious dialogue and debate, and has moved from repulsion and collision to understanding and partnership — and this is a very acceptable level.”

He added, “This does not mean we are on the same page, but we have developed communication channels with them to overcome any obstacles in the context of shared space with us.”

The Arab Spring revolutions that took place in the past few years were partly caused by the civil society components, including human rights defenders, activists, institutions and parties. This instills great hope in the hearts of Palestinian citizens that these institutions will one day put an end to poverty, the high cost of living, political arrests and the deferral of the right to elect.