Inspired by the plight of an Alexandria villa that has played an important literary role, a group of Egyptians are working to educate the public and protect the remaining palaces and other architectural wealth of Egypt. 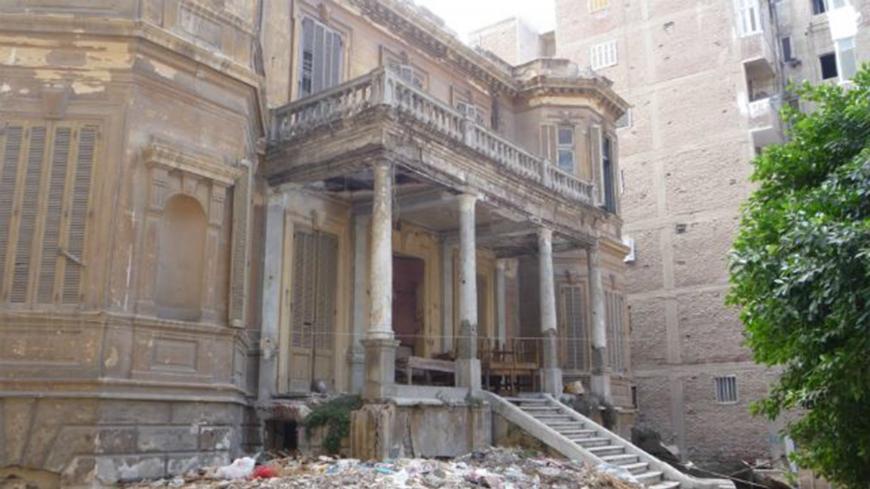 CAIRO — The destruction of historical palaces in Alexandria was foreshadowed by a popular TV series called “The White Flag” in 1988. It depicted the efforts of a woman, illiterate but rich and influential, to buy an old palace and have it torn down to be replaced by a huge residential tower.

In February, in response to so many old mansions being torn down, including the Alexandria villa that inspired British author Lawrence Durrel to write his famous “Alexandria Quartet,” a campaign called “The Country's Architecture: An Identity Worth Saving” alerted Egyptians to the heritage that is being destroyed. To enhance awareness of the country's historic buildings, a website is archiving Egypt's historical and architectural heritage.

Welad al-Balad, an award-winning media production and advertising firm, ran the campaign in every Egyptian governorate from Feb. 11 to March 11. Its media partners included Al-Masry al-Youm, Masrawy and the Emirati Al-Ayn as well as several development partners such as the Misr el-Kheir Foundation, Al-Warsha group and Al-Turath Library.

Fatima Farag, manager of Welad al-Balad, told Al-Monitor that the archive project is based on the concept of citizen journalism. The company trained volunteers in writing, editing and photography before assigning them various tasks. Some wrote articles about the historical buildings in different governorates and others took pictures. Another group was trained on social media and web maintenance. Yet another group of volunteers organized seminars and meetings with specialists.

Within a month, the participants of “The Country's Architecture: An Identity Worth Saving” posted more than 130 articles, ranging from press reports about the history of historical buildings to investigative reports and photo albums. At the closing ceremony March 11, the campaigners presented a documentary on the historical heritage of Egypt and the need to protect it.

The campaign also put on several seminars in the various governorates. At a March 5 seminar at the Swedish Institute of Alexandria, prominent media figure Ahmad al-Meselmani and France Desmarais, program and partnerships director at the International Council of Museums, discussed how to protect Egypt's heritage, especially its aging palaces.

Ahmad Sedqi, architectural designer and expert in strategic and architectural development for historical areas that are in deteriorating condition, told Al-Monitor, “Most buildings from the 20th century in Egypt are threatening to collapse" because of poor maintenance. She said, "The Egyptian laws do not acknowledge a building as historic unless it is at least 100 years old. Many of those palaces and villas date back to 70, 80 or 90 years and they also must be preserved because they are of architectural value, even if they are not considered antiquities.”

Sedqi added that many buildings in danger of being torn down and replaced with modern buildings are in private hands, such as the Hafez Afifi Pasha Villa, which used to belong to the former head of King Farouk’s Royal Court, and Villa Ambron, where English writer Lawrence Durrel, the author of the “Alexandria Quartet,” lived in the 1940s. Sedqi called on the state to pass new legislation that would put these palaces under state protection and compensate the owners.

Mohammad Farag Amer, a member of the youth and sports committee in parliament, told Al-Monitor that a new law is under discussion.

On the sidelines of the March 5 seminar, Desmarais said she expects the campaign to receive international acclaim and that perhaps get funding from international associations. The "International Alliance for the Protection of Heritage in Conflict Areas" fund has a yearly funding of $100 million, said Desmarais.

Amira al-Nashqani, head of folk and culture at Welad al-Balad, told Al-Monitor that many state and civil organizations are interested in the campaign and that she hopes officials will use the archive of the campaign to monitor historical palaces and buildings and save them from destruction.