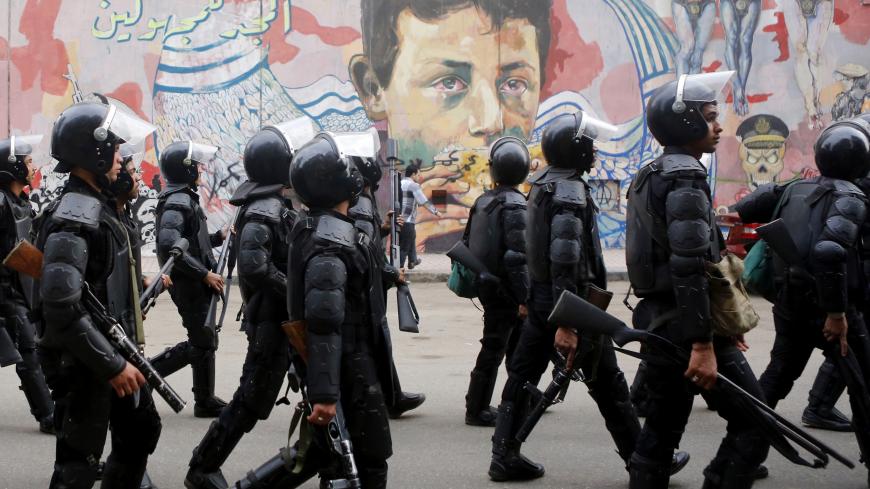 Ahmad Tarek, 23, and his mother were at home, she said, when officers from Egypt’s National Security Agency stormed into their Cairo flat Feb. 18 and abducted him. After he was taken, Tarek’s mother rushed to the nearest police station to ask for his whereabouts, but authorities sent her away after claiming Tarek hadn't been abducted.

Al-Monitor contacted Tarek’s mother, but she declined to comment for fear of reprisal. His peers say they don't know why he would have been taken. Though he was an activist, he wasn’t a prominent one. Besides working as a freelance videographer for the Arabic Network for Human Rights Information (ANHRI) — a banned organization in Egypt — he also worked in the election campaign of lawyer Khaled Ali, a secular activist who ran for president.

“Tarek’s house was raided, and he got arrested without being informed of the reasons for his arrest, nor did he see an arrest warrant. His mother, even now, still doesn’t understand why he was arrested,” Gamal Eid, a human rights lawyer and the director of ANHRI, told Al-Monitor.

Tarek could potentially face charges of working for a banned organization, but until now the charges haven’t been revealed, and it’s difficult to speculate if freelancing for ANHRI was the reason he was taken. So far, the only available information from lawyers at ANHRI is that he will be in Tora prison until March 5.

Since snatching power in 2013, President Abdel Fattah al-Sisi has authorized enforced disappearances to terrify opponents. In 2015, local rights groups told Amnesty International that up to four people were abducted by the National Security Agency each day. The Egyptian Commissions for Rights and Freedoms (ECRF) further documented 378 cases of enforced disappearances between August 2016 and August 2017. Yet the true number is believed to be higher since many families fear that reporting disappearances could inadvertently put loved ones in jeopardy.

According to rights groups, the National Security Agency is first and foremost targeting perceived supporters of the outlawed Muslim Brotherhood, though secular activists such as Tarek are also becoming major targets.

That was clear when journalists Hassan al-Banna and Mostafa al-Aasar were abducted on their way to the bustling Cairo district of Dokki on Feb. 4. Banna was interning for Al-Shorouk newspaper at the time of his disappearance. He is not related to the founder of the Muslim Brotherhood despite sharing the same name.

Some of Banna’s family are nonetheless devoted members of the Brotherhood, though his friends say that he became disillusioned with the group during Mohammed Morsi’s presidency. By then, Banna became a secular activist. But he soon gave up his political aspirations after his eldest brother was gunned down in the Rabia al-Adawiya massacre in August 2013.

“Hassan is my youngest brother and the most caring one among all my siblings,” Abdul Rahman Fares al-Banna told Al-Monitor from Qatar, where he works as a journalist for Al-Araby Al-Jadeed, an online news platform that is banned in Egypt. “I don’t know why he was taken, but if someone opposes the government in Egypt, then they could go missing at any time.”

While that is true, young men who belong to families with a political history are at greater risk, regardless of their personal views. Authorities may have even seized Hassan Banna to use him as leverage against his wanted brother in Qatar, which Amnesty International says is a common state tactic.

Aasar was also on the government’s radar for months before he was abducted. A critical journalist and press freedom advocate, he wrote several articles for the Huffington Post Arabic and Ultra Sawt (Ultra Voice), which is an independent platform that promotes the voices of Arab young people.

In January, Aasar was attending a media workshop in Beirut when the National Security Agency reportedly came to his house in Faiyum, a city 60 miles southwest of Cairo. His elder brother, Mohammad al-Aasar, said he told the officers his brother wasn’t there. And when they left, Mohammad al-Aasar called his brother to tell him the authorities were looking for him.

“[My brother] said he wasn’t scared and that he was going to return to Egypt. He said that he wasn’t doing anything risky, nor was he a criminal,” Mohammad al-Aasar told Al-Monitor.

On Feb. 15, 11 days after Mostafa al-Aasar and Banna went missing, they were brought before the State Security Prosecution. The two were reportedly charged with belonging to a banned organization and disseminating false information to criminal media organizations. The two were reportedly asked about their political views and the nature of their journalism. Though relieved they are alive, their families don’t know where they are being held in between court hearings.

It’s almost impossible to know their whereabouts since Egyptian authorities regularly deny the practice of enforced disappearances. The state recently slammed a BBC story that investigated the issue. Controversy erupted after a woman who reportedly told the BBC she was abducted denied the allegations on an Egyptian late-night talk show Feb. 26. The BBC has stated that it stands behind the integrity of its reporting team.

Al-Monitor nonetheless contacted Hossam Nasser, who is the human rights spokesman for the Interior Ministry. But when asked about the abduction of Tarek, Banna and Aasar, Nasser said, “I don’t comment on incidences that never happened.”

Despite the ordeal, Banna and Aasar appear to be more fortunate than many others who have gone missing. Mohamed Lotfy, who is the executive director of the ECRF, told Al-Monitor that many people turn up dead soon after they disappear. The most notable incident was when Italian doctoral student Giulio Regeni was found dead on a highway between Cairo and Alexandria just nine days after he disappeared from central Cairo while researching trade unions in February 2016. Italy and the European Union have criticized Egyptian authorities for obstructing an Italian investigation into the death, with various reports pointing to Cairo’s involvement, a claim the government denies.

“ECRF is putting together a short report about the number of people who have been executed after they disappeared. We hope to publish it in the next couple of months,” Lotfy told Al-Monitor over the phone.

For now, Tarek, Banna and Aasar are alive, but their families fear that the three young men could be tortured into ratting out other activists or confessing to crimes they didn’t commit. Prison guards allegedly often suspend inmates from the ceiling and give them electric shocks to their genitals. Neither Banna nor Aasar, warn their brothers, are strong enough to endure such torture.