A few "fortunate" souls return from forced disappearances to recount their experiences. 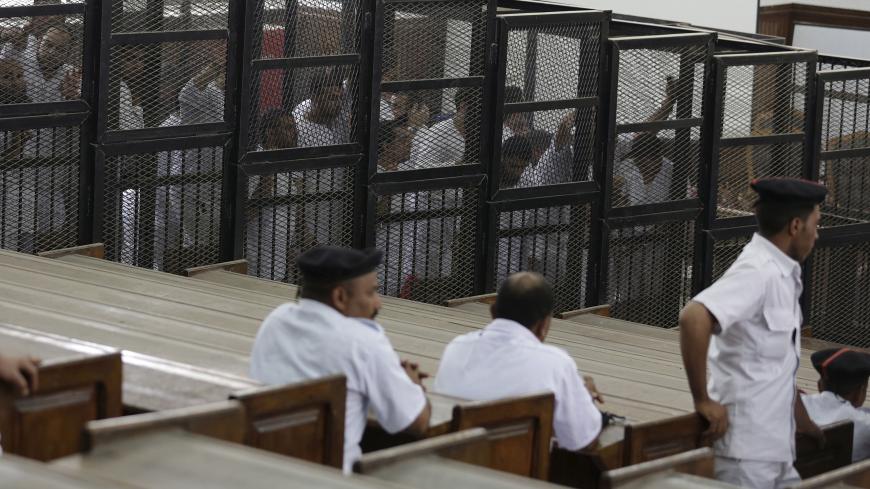 Suhayb Saad, an activist who rights groups say was taken by security forces and forced to confess on TV his membership of a terrorist cell, a reference to the Muslim Brotherhood, stands behind bars with other co-defendants as they wait to listen to the ruling at a court in Cairo, June 23, 2014. - REUTERS/Asmaa Waguih

It was 3 a.m. on May 24 when an armed force burst into the Khalil family home. Noor Khalil opened his eyes to eight masked men. He was pulled out of bed, bound and blindfolded. Then he dropped off the face of the earth for four days.

In an Egyptian Homeland Security building, where physical constraints were accompanied by a gun to his head, Khalil said he learned that his brother had met with the same fate, except the latter would not resurface for 122 days.

A United Nations international convention defines enforced disappearance as the arrest, detention, abduction or other deprivation of liberty by a state or state-authorized agents, followed by a refusal to acknowledge the act.

Having strong roots in the 1990s war against terrorism, the phenomenon is not new to Egypt. But the term “enforced disappearance” was not common, and the incidents were not as documented or systematic as they are under the current regime, according to Mohamed Lotfy, director of the Egyptian Commission for Rights and Freedoms. Lotfy, a former Amnesty International researcher, spoke with Al-Monitor in a recent interview.

Disappearances began increasing after then-President Mohammed Morsi was overthrown in July 2013. Initially, Muslim Brotherhood supporters were targeted but now, enforced disappearances affect all citizens, whether politically affiliated or not.

At first, the disappeared were hidden in a military prison in Ismailia called Al-Azouli. As people emerged from there, telling horror stories of torture and mistreatment, the venue was exposed internationally in June 2014.

But that was not the end, and there is no way of telling how a person is chosen, human rights lawyer Haleem Henish told Al-Monitor.

Many victims of forced disappearance are Islamists but they are not leaders, nor do they have mobilizing power, Henish said. Ashraf Shehata, who was in favor of Abdel Fattah al-Sisi running for president, has been missing for two years, one of the longest documented stretches.

Authorities “scoop” up people,” Lotfy said, “like throwing a big net into the sea, and fishing out what they can.”

He explained that everyone accompanying a “suspect” who is arrested is also arrested, followed by arrests of people from their circles. This is a common practice in the districts of Nasr City, Shubra and Matareya, where those detained are mainly children, he said.

Lotfy recounted an undocumented incident in which he said one high school student was arrested, and his whole class went missing for five days.

According to Article 54 of the Egyptian Constitution, police are required to deliver an arrested citizen to public prosecution within 24 hours. Yet one day might not provide enough time to “extract” information.

Khalil said his brother Islam was tortured with electric currents as he was suspended by his hands and feet, which were tied to a pipe in a position designed to inflict maximum stress. Denying knowledge about people he had never encountered before, his brother was told to “stay hanging there until you remember.” Racking his brain for information he didn’t have while his blood pressure rose, he slipped into unconsciousness, Khalil told Al-Monitor.

Egypt’s security institutions are a failure, incapable of carrying out proper investigations, Henish said. So people are physically pressured or emotionally coerced until they confess to whatever crime.

All tales tell the same story. Hundreds of blindfolded and shackled Egyptians fill the corridors of Homeland Security’s invisible realms. They are forbidden to speak to each other. When they are interrogated, the questions don’t involve certain charges, but pry into personal information about friends such as what books they read and which places they frequent, according to several interviews Al-Monitor conducted.

A pivotal topic is how the disappeared are related to the January 2011 revolution. One victim recounted being told, “Tell me what you are planning! You revolutionaries brought down the country. Without Homeland Security, Egypt would have gone down in flames!”

Lotfy said of the captors, “They want the genie returned into the bottle that broke with the 2011 revolution.”

In some cases, people are forcibly disappeared more than once. And some who disappear are killed, Henish said.

Noor Khalil recalled being threatened with the same fate as Islam Attito, an engineering student taken from an exam hall May 20. His body was found the next day.

People who are tortured into confessing to crimes that call for the death penalty are then quickly put through a military trial, without any opportunity for a fair one, Henish said. In a case dubbed “Arab Sharkas,” three young men were arrested before the crime they were accused of even took place, Henish said, yet they were executed.

Islam Khalil reappeared in September. Wearing the same clothes he was arrested in four months before, emitting a non-human like odor, peering through ghostly eyes from his hair-covered face, he was barely recognizable to his own family. With no strength to talk, he merely smiled.

Later, Khalil revealed that some people whose families thought were dead were actually still breathing. The list of names he provided gave new life to the campaign “Stop Forced Disappearances,” which had been launched in August. But saving those lives came with a high bill.

According to Noor Khalil, his brother was denied the opportunity to file a forensic report to document abuses. Officers plainly told him, “You were targeted from above.”

Al-Monitor was told that, when filing complaints at police stations, victims’ families are slapped with a sharp, sarcastic, “Filing a complaint to the government against the government?”

The Interior Ministry has repeatedly denied any forced disappearances in Egypt, to which human rights lawyer Taher Abo El Nasr replied, “If the state claims ignorance of where a person is, it is still its job to find all those missing people.”

An accountant who asked to remain anonymous due to safety concerns, is one of the few to resurface, and is among the even fewer to be released without being tortured or framed. He remembers hearing angry voices from the room next to his giving the order, “Confess to what you did.” The order was followed by the unmistakable sound of powerful electric stun guns, exploding wails and screams.

When the accountant was discharged Feb. 11, he and three others were thrown by the side of a highway still blindfolded. As they parted ways, they congratulated each other on “seeing life again” — albeit a life forever tainted by the haunting whimpers coming from the room next door.