Mysterious arrests are on the rise in Egypt, leaving citizens feeling vulnerable to both the precarious security situation and security forces. 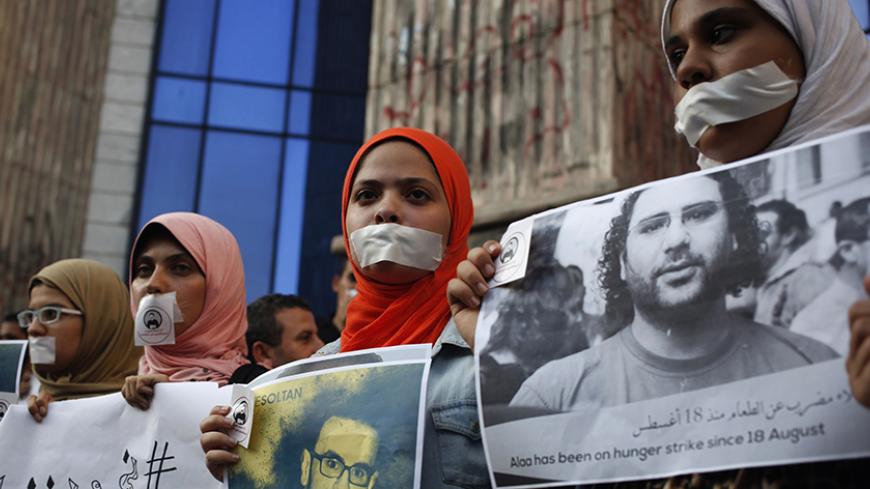 Young people hold pictures during a protest in support of imprisoned activists who are on a hunger strike in prison, in front of the Press Syndicate, in Cairo, Aug. 25, 2014. - REUTERS/Asmaa Waguih
Ahmed Ateyya
@@ateyya
July 3, 2015

Esraa el-Taweel, Omar Ali and Suhaib Saad had planned to have a fun night out when they went for a horse ride and a nice dinner June 1. The three friends never anticipated that they would not make it back home.

When all three stopped answering their phones, their families got worried. Ali’s sister Sara is a journalist who learned through her sources that there were dozens of random arrests that night.

Since her brother was last spotted in Maadi, an upscale neighborhood in south Cairo, she headed for the district’s police station searching for him. “The low-ranking police [staff] affirmed that they had seen my brother inside the police station’s prison cells,” Sara told Al-Monitor, “but the police officers denied that he was in their custody.”

Since April, there have been dozens of similar incidents. Activists, students and ordinary citizens in the wrong place at the wrong time have all disappeared. Their families receive informal and unverifiable information about their detention from the police and other prisoners, but the authorities deny their involvement and never officially admit to having arrested them. The Ministry of Interior issued several statements to local newspapers claiming that it is bound by legal procedures and would never arrest anyone without a warrant and a clear charge.

A human rights campaign called “Freedom for the Brave” has been documenting such cases since 2014. Khaled Abdel Hamid, a member of the group, told Al-Monitor, “Forced disappearance is not an unusual practice by the Egyptian security bodies.”

“The past few months, however, have witnessed a huge surge in the numbers of the missing,” said Abdel Hamid, adding that the group has documented the disappearance of at least 163 persons throughout Egypt between April and June.

Abdel Hamid said that there is no single explanation for the phenomenon. “Maybe the police feel that they are acting with complete impunity, they don’t care about the law anymore,” he said.

Taweel is a photojournalist who occasionally tweets anti-regime slogans, while Saad seems to have been swept up in the ongoing "Marriott terror cell" trial, in which 20 Al Jazeera journalists are facing charges of plotting to defame Egypt through publishing false news. As for Ali, his sister said that neither she nor her brother are involved in political activism, but their father was a member of the Muslim Brotherhood and was killed in August 2013 during the incident in Rabia al-Adawiya Square.

For weeks, Sara followed the trail of eyewitness reports on her brother’s whereabouts in several prisons and police stations, only to find official denials that he had ever been detained by the police. In mid-June, she received a tip that her brother was in Tora prison. “Some prisoners saw him and informed their families, who then relayed the information to me.”

After multiple requests, Sara was finally allowed to meet her brother. “He had been clearly tortured,” she said, claiming that his right hand was bruised and paralyzed, his left was shaking and there was a healing burn scar on his back.

Sara recalled her brother’s account of his abduction. Police officers in plain clothes forced him and his friends into a civilian car the moment they got out of the Maadi Chili's. Since then, he has been moved between several police stations and prisons, but he was kept blindfolded most of the time and was not allowed to know his location. He was interrogated about his father and whether he himself was involved in a terrorist cell.

She was told by police guards that her brother is facing charges and is awaiting trial, “but we do not know the specifications of the charges, the number of the case or when and where it will take place.”

Saad ended up in the same prison as Ali, but they were separated along the journey between different prisons and were not interrogated together. Saad reappeared in court for his scheduled trial on June 29.

As for Taweel, she was finally found in al-Qanater Prison. Her lawyer, Haleem Heneesh, told Al-Monitor that she will be tried on accusations of publishing false news and defaming the authorities. Heneesh said that the police claimed she was arrested June 15 instead of June 1. “This is a clear indication of foul play to cover up the illegal arrest,” he said.

While these three friends have been found, the fate of many others remains unknown. On April 20, 2014, masked men forced Ahmed Salama, a teacher from Kafr el-Sheikh governorate, into a civilian vehicle while he was walking back home. His wife, Heba Nada, spent weeks searching before she found him June 20 at the governorate's central police station. “I only saw him for few seconds by chance, but the police continue to officially deny he is in custody,” she told Al-Monitor. She has not seen him since.

The rising number of disappearances prompted Egypt’s National Council for Human Rights (NCHR) to organize a hearing last month for the families of missing persons. More than 50 families gave their testimonies.

NCHR member George Isaac told Al-Monitor that the council is preparing a detailed report to be filed to the Cabinet and the president.

Isaac said that such practices are not new or surprising, but the constant security threats and terrorist attacks in Egypt might be linked to the escalating rates of abductions and human rights breaches.