Atheism is increasing among young people in Iraq, which some are blaming on Islamic parties' mismanagement of the country. 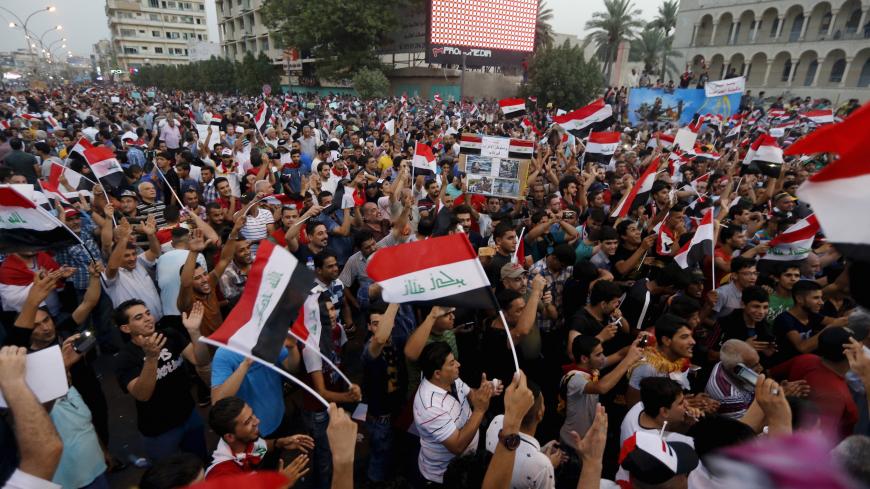 Iraqi people shout slogans during a demonstration against the poor quality of basic services, power outages and calling for trial of corrupt politicians in Baghdad, Iraq, Aug. 28, 2015. - REUTERS/Thaier al-Sudani

Arrest warrants have been issued for four Iraqis on atheism charges, according to Dhi Qar province's Garraf district judiciary. The announcement garnered quite a reaction on media and social networks, as some say these hunts infringe on the rights of the Iraqi people, whose constitution guarantees them freedom of belief and expression. Other observers say the campaign has political aspects.

Dhidan al-Ekili, the chief Garraf judge, told local Iraqi newspapers March 11 that security forces had been able to arrest one of the four indicted, as the search for the remaining three continued. Ekili said they are being pursued for “holding seminars during social gatherings to promote the idea of the nonexistence of God and to spread and popularize atheism.”

According to Ekili, the local court administration has tasked intelligence agencies with cracking down on the “atheism phenomenon.” Ekili said the crackdown is in accordance with the Iraqi Penal Code.

But political and legal analyst Ali Jaber al-Tamimi told Al-Monitor, “There aren’t any articles in the Iraqi Penal Code that provide for a direct punishment for atheism, nor are there any special laws on punishments against atheists." However, "there are articles that punish the desecration of religions.”

The Iraqi Constitution allows "freedom of belief and intellectual views.”

Critics on social media were quick to lambaste authorities in Garraf, but atheists themselves weren’t safe from ridicule by well-known Facebook figures. Stand-up comedian Ahmad Wahid, for one, slammed people who publicly brand themselves as atheists without having a profound understanding of atheism.

Many Iraqi newspapers are claiming that the propagation of atheism is a manifestation of the Islamic parties’ failed reigns over the past decade, in addition to their corruption.

Studies and statistics about beliefs and views in Iraq are nonexistent. However, Gallup released a study that said about 88% of Iraqis were religious in 2012. Iraq was ranked No. 7 globally in terms of its religious demographic.

The situation in Iraq seems complicated when it comes to defining atheism. Many clerics who are close to Islamic political parties have misconceptions regarding the subject. For instance, secularism is often branded as atheism. Some religious figures promote the idea that liberal and communist ideologies are inherently anti-religion and teach that God doesn't exist, which is why they should be resisted, as Shiite cleric Amer al-Kufaishi stressed in August 2017.

Indeed, the campaign against atheists has heavy political ties. Some of the Islamic parties that have been in power since the US invasion of Iraq in March 2003 are behind it, as Safaa Khalaf, a reporter who follows social and political matters, believes.

“The idea of atheism in Iraq is rooted in political pressure and its economic and social ramifications,” Khalaf told Al-Monitor. “Atheism surfaced as a social reaction to the overreaching hands of political Islam and its failure to govern services and state, not to mention the new patterns of intellect and lifestyles that were the result of the openness of modern communication, especially for new generations that live under huge pressure [from] frustration.”

Khalaf, who monitors desperation-rooted phenomena in Iraqi society, added, “Most often, intellectual views are confused with religious views or civil rights-related views. You can often see demonizing propaganda on social media against any trend that collides with the interests of political Islam’s authority.” Based on this, "Secularism was considered an adversary of religious faith due to political Islam’s rhetoric, and this term has been removed from political circulation in Iraq since 2003. Many established Iraqi parties, such as the Iraqi Communist Party, renounced this term, and the term 'civility' replaced it," he said.

“Inaccurate and misused labels are being used to describe incorrect behaviors by the political authority in light of the security mentality prevalent in both society and state,” Khalaf concluded. “The authorities are comfortable with this illiteracy because it immensely aids them in oppressing any opposed view, especially if it challenges religion, clerics or practices that interfere with public freedoms.”

Indeed, atheism has always been on the radar of Islamic parties' leaders in Iraq. Many of them simply believe atheism is worth fighting and restricting, while some others consider it an attack on the Islamic parties themselves. Iraq's highest authority on Shiite religious and legal matters considers the propagation of atheism a result of political failure in Iraq for more than a decade.