By adding moderate Hamas leader Ismail Haniyeh to its terror list, the United States is signaling further escalation in the political brinkmanship game that aims at imposing a political solution to the Palestinian conflict rather than negotiating one. 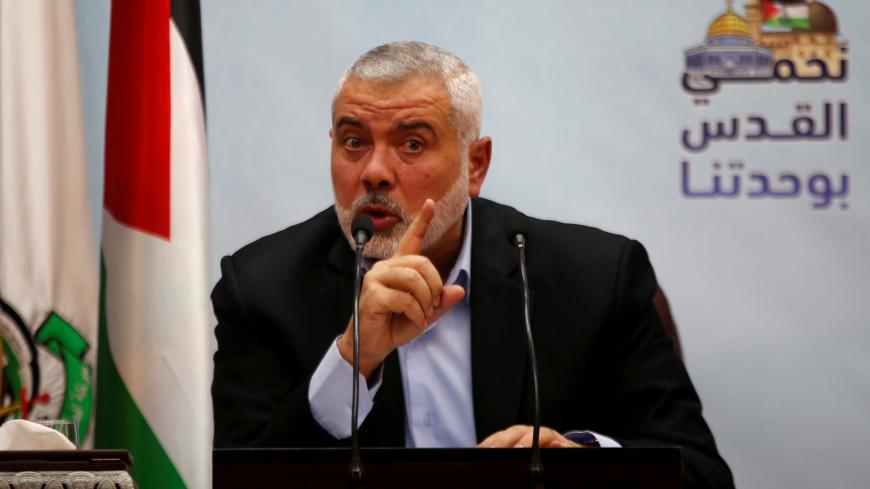 The former Palestinian prime minister whose Change and Reform list received the highest number of votes in the 2006 Palestinian legislative elections was designated Jan. 31 as a “terrorist” by the United States. The Office of Foreign Assets Control (OFAC) of the US Department of the Treasury added Ismail Haniyeh to the list of Specially Designated Global Terrorists.

Haniyeh, born in 1962 in the Shati refugee camp in the Gaza Strip, was elected in May 2017 as the head of Hamas. Outside of Israel, the United States is the first country to pin the terrorism label on the political head of the Palestinian Islamic movement.

Nathan Brown, a professor of political science and international affairs at George Washington University, told Al-Monitor that the Treasury’s designation comes as part of an interagency process and was announced by the State Department, which is a participant in that process. “But the formal step is inclusion in the OFAC of the US Department of the Treasury. So there is nothing new or unusual about the Treasury's role here,” he said. Interagency policy allows for all US government agencies to coordinate their positions before a decision is made public.

Ambassador Nathan A. Sales, the State Department coordinator for counterterrorism, told The Jerusalem Post that the consequences of being on the US terrorism list are significant. “All assets belonging to Haniyeh under US jurisdiction will be frozen,” Sales told the Israeli daily.

The Hamas leader, who was elected to replace Khaled Meshaal as head of Hamas’ political bureau, was seen as part of a moderating effort within the Islamic movement. In May 2017, Hamas released a memorandum outlining a significantly changed political position that included indirectly recognizing Israel by accepting the goal of the creation of the Palestinian state on the West Bank and Gaza with East Jerusalem as its capital. The new Hamas document also makes no connection at all with the Muslim Brotherhood.

Hassan Abu Hanieh, an independent expert on Islamic political movements, told Al-Monitor that Haniyeh was the strong voice behind attempts to tone down the anti-Israeli ideological positions of Hamas.

“By rejecting Haniyeh and the moderate wing in Hamas, US President Donald Trump and his ally, Israeli Prime Minister Benjamin Netanyahu, are trying to radicalize Hamas by making it clear that even moderate voices are no longer legitimate.”

Brown said that the move could reflect pressures from outside and inside the United States to declare the Muslim Brotherhood a terrorist organization. “I believe that there is political pressure from some Middle East governments [Egypt, the United Arab Emirates] and some leading figures in the Republican Party to declare the Muslim Brotherhood as a terrorist organization.”

Brown added that interagency process in Washington has successfully resisted the pressure to add the Muslim Brotherhood to the list but “this doesn’t protect individuals. Slapping the terrorism label to individuals who are seen as having some origins with various Brotherhood organizations is seen as a partial victory to them.”

Abu Hanieh concurs with Brown, saying that the key country in the effort to demonize the Muslim Brotherhood is the UAE. “The UAE has been the leading country in this effort and has been followed by Egypt and even Saudi Arabia of late,” Abu Hanieh noted.

Abu Hanieh, who is based in Amman, added that the move against Haniyeh might be a sinister attempt to dislodge current efforts at reconciliation between the PLO and Hamas. “Although the reconciliation has not been accomplished fully, there is clear progress to bring the Palestinian parties together, especially since the Trump announcement regarding Jerusalem. Both the United States and Israel are not excited about this.”

Haniyeh and President Mahmoud Abbas have been vocal in their anger and frustration with the declaration on Jerusalem. Abbas has cut off all meetings with the US administration, while Haniyeh called Dec. 7 for a “popular uprising” against the United States' recognition of Jerusalem as Israel’s capital. “Tomorrow will be a day of public anger and the launching of an uprising under the name of Intifada of Jerusalem Freedom,” Haniyeh said during a speech in Gaza.

Brown said that over the past decade, Hamas has established itself as a political actor that has to be dealt with. “Hamas' main domestic rival, Fatah, has signed a series of agreements with Israel — none of which have been fully implemented. And Hamas' major adversary, Israel, has come to deal with Hamas, indirectly but very clearly negotiating a series of agreements with the movement. The US move may underscore efforts to ensure that such political arrangements are tactical but not strategic in nature.” Hamas and Israel agreed indirectly on a prisoner exchange deal in 2011, the period of quiet (tahdia) in 2012 and on the cease-fire in 2014.

The Haniyeh designation could also be related to a much wider context. In the context of the larger US position on Iran and its allies, Washington’s designation of Haniyeh is not simply a criminal position but also a legal, diplomatic and security one. “The result is not simply to use criminal law and financial countermeasures as tools, but may go so far as to limit diplomatic tools by making them legally difficult if not impossible,” Brown argued.

Whatever the motivation was to designate Haniyeh as a terrorist, it is clear that there is little wiggle room left in the political arena for any substantive progress with a movement that clearly represents an important sector of Palestinian society. By removing Haniyeh from the political game, the United States is signaling further escalation in the political brinkmanship game that aims at imposing a political solution for the Palestinian conflict rather than negotiating one.