While claims that Russia is playing a large role in reconciliation talks between the Palestinian movement Hamas and the Syrian regime may be overstated, Moscow could benefit in several ways if the two sides restore relations. 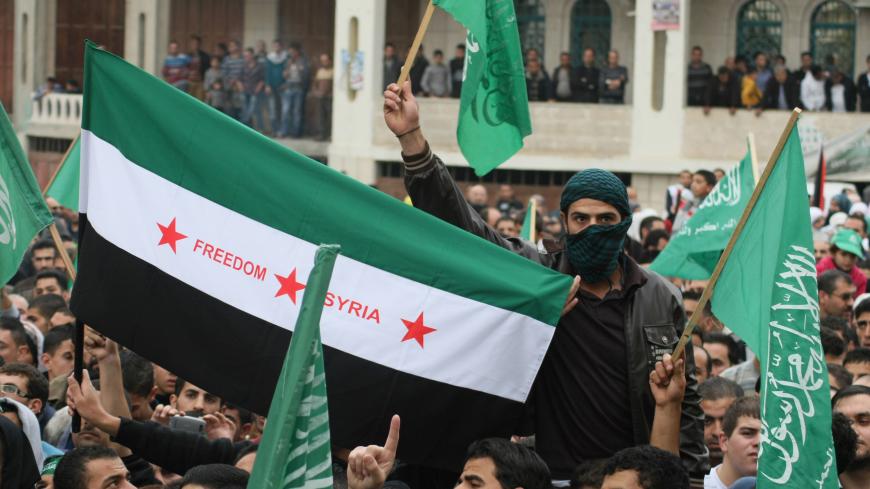 Palestinian supporters of the Islamist movement Hamas wave their flag and a pre-Baath Syrian flag (C) during a demonstration in the West Bank city of Hebron on Nov. 21, 2012, against the ongoing Israeli military offensive on the Gaza Strip. - HAZEM BADER/AFP via Getty Images

As talk intensifies about the prospect of reconciliation between Damascus and the Hamas movement, which has been a supporter of Syrian President Bashar al-Assad’s opposition, the question arises: What is Russia’s position on the issue?

Generally Moscow’s opinion is left out of these discussions on a potential rapprochement. And strangely so, especially given many analysts' and commentators’ knack for exaggerating Russia’s role in the Israeli-Palestinian dialogue. Within Russia, such exaggerations are a reflection of a desire to shore up the country’s image on the world stage, while the outside observers often lack complete information about the real situation.

Representatives of Hamas have been visiting Moscow for over a decade. The first official visit occurred in 2006 upon the invitation of President Vladimir Putin. Western observers interpreted the visit as a sign of Moscow’s return to the international arena. But the move provoked condemnation from Chechen rebels, who denounced the decision of “Palestinian mujahedeen, the brothers of Chechens, to accept Putin’s handshake.” In reality, though, the Kremlin was not mulling any complicated plans. Putin’s design was the same as it has always been: using contradictions between political players to his own advantage and showcasing Russia’s independence from other partners of the Middle East Quartet: the European Union, the United Nations and, most importantly, the United States. So the representatives of Hamas were invited to Moscow nine days after Putin labeled their victory in Palestinian parliamentary elections a “strong blow” to the peace process.

The signing of the Abraham Accords left Russian diplomacy on the sidelines. Moscow has been making positive statements about the prospect of normalization of ties between the Arab states and Israel, as this suits Moscow’s concept of security in the Persian Gulf. Yet Moscow is struggling to come out of the Soviet imperial shadow and is irritated that the peace process is advancing without Russia's involvement.

Hence the attempt to devalue the results of the diplomatic process and let it be known that, while others are doing publicity stunts to show off their largely superficial achievements, Russia is involved in real, substantive issues. For example, Hamas political bureau chief Ismail Haniyeh declared last year that Hamas is ready to help find a solution to the conflict in northern Syria. The statement came out shortly after Haniyeh's meeting with Russian Foreign Minister Sergey Lavrov. This led some analysts close to Hamas to suggest that Moscow may be acting as a mediator in the talks to normalize relations between the movement and Damascus. In 2016, the Syrian regime referred to Hamas as “a Muslim Brotherhood affiliate” that “will always be a terrorist and a hypocrite.” Yet just one year later Assad toned down his rhetoric as talks on reconciliation began.

Expectations that Russia could play the role of mediator in Palestine-Syria talks are still kept alive. One reason for this is because this month, Palestine became the first political entity in the Middle East to receive the Russian-produced vaccine Sputnik V. Moreover, Russia features in the list of countries that — along with Egypt, Qatar and Turkey — have become guarantors for the presidential and legislative elections in the Palestinian territories. Yet this agreement on behalf of Hamas is nothing but a bluff and an attempt to signal to the incoming Joe Biden administration its readiness to reach compromises against the background of declining pan-Arab solidarity and of the readiness of Arab countries and even Turkey to improve ties with Israel. It is hard to imagine what guarantees can be given to ensure the registration of voters, say, in Jordan, given the very large number of Palestinians in the country.

In Russia, however, conversations about the prospects of reconciliation between Damascus and Hamas have been virtually nonexistent. Only one Russian news site seems remotely concerned. FAN, a news agency linked to the Russian businessman Yevgeny Prigozhin (who has been tied to the Wagner Group), recently published a small article citing Hamas leader Atef Adwan, the head of the Palestinian Legislative Council's Economic Committee, mentioning the possibility that the relations between Damascus and the movement might return to more what they were before the war. The article said only a fraction of Syrian elites hold an emphatically negative view about such a reconciliation, while Iran and Hezbollah are trying to put pressure on Israel at an inopportune moment, one in which “Damascus is trying to improve the situation in the south of the country.”

According to Al-Monitor sources close to the Russian Foreign Ministry, there is hardly a consensus among Russian diplomats and the military about Hamas’ role in the Syrian conflict. Some blame Hamas for chasing Arab Gulf money and providing terrorist groups with the plans of underground communications in the Yarmouk refugee camp. Those skeptics also suspect the movement of playing its own game, citing activity in the Palestinian camps in Tyre and Sidon in Lebanon that is kept secret from Hezbollah. Yet others say that Hamas has maintained a largely neutral position during the Syrian war and that the movement’s affiliates in Syria — Aknaf Beit al-Maqdis — have been acting in an autonomous fashion. Yet another strand of opinion holds that — even after the movement left Syria — there were people such as Kamal Ranaja (Kamal Hussein Ghannaje), killed in Damascus in 2012, who stayed in the country and supplied weapons from Iran to Gaza via Syria (and Sudan before that).

Putting those judgments to one side, it is worth mentioning that Hamas' connections with the Syrian regime have been cultivated in an indirect, somewhat obscure manner. Thus, the Arab Nationalist Guard units, who took Assad’s side in the Syrian war, claim to be fighting all the extremists in the area. Yet when Al-Monitor visited the Guard’s camp in Al-Malihah in Damascus, one of its commanders said the unit is leaning on the support from Hezbollah instructors and had extensive connections with Hamas. He specified the ties were “with the Hamas wing that does not have associations with the Muslim Brotherhood,” without divulging when exactly such a division in the Hamas ranks appeared.

“Despite speculation, Moscow is trying to keep its distance from the talks between Hamas and the Syrian government so as to avoid being associated with any one side of the regional rivalry,” a source close to the Russian Foreign Ministry told Al-Monitor.

Leonid Issaev, a political scientist at the National Research University Higher School of Economics in Moscow, told Al-Monitor that Russia’s noninterference is a rational stance, provided that Moscow will still have to negotiate with Israel on such topics as the situation in Syria’s southern provinces and on the Israel Defense Forces air force operations. “For Russia to take part in the Damascus-Hamas negotiations, it needs serious reasons. As things stand, those incentives are absent. Israel has in the last few years established itself as a firm partner of Russia, while Moscow views in Hamas nothing more than an additional source of leverage,” he added.

That said, Russia has several reasons to take a positive view on the Hamas-Damascus negotiations, even if they are being overseen by Iran, Issaev said. “First, the fact that negotiations are taking place inserts the Syrian regime back into the regional agenda. This is in line with Moscow’s desire to legitimize Assad’s regime,” Issaev said. Moreover, negotiations might provide Russia with additional leverage over the Palestinians and the Israelis, an area where Russian influence has somewhat faded in the last few years. The strengthening of Hamas via the Syrian regime undermines the negotiations on reconciliation and opens an opportunity for Russia to insist on discussing the issues within the Middle East Quartet and other formats where Russia acts as a guarantor, Issaev added.

A third factor involves Russia’s view of Damascus and Cairo as natural allies of Hamas. This would mean that sooner or later, the movement will have to correct course. “Hamas’ struggle for survival pushes it into finding new supporters. Damascus views Hamas as a potential point of leverage on Israel in the post-Trump era, and formalization of this reconciliation is not a huge problem. While Syria’s demands for public apologies from Hamas … make little sense, there may yet be a more subtle reconciliation along the lines of the Putin-Erdogan rapprochement in 2016 after the downing of a Russian jet,” Issaev said.