Why Russia isn't bothered by US-Turkey agreement on Syria

Russia, which has been conducting its own whirlwind diplomacy this week, wasn't disturbed by the US-Turkey deal over northern Syria. 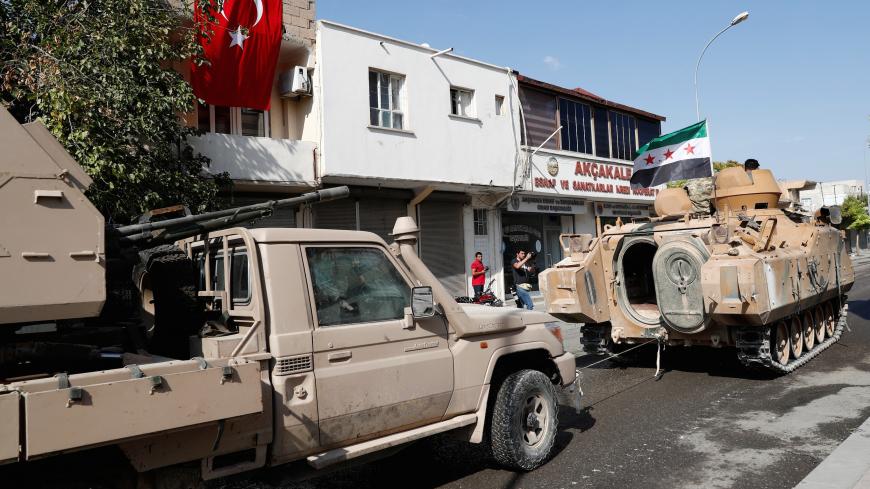 MOSCOW — In the past 24 hours Russia has patiently waited to see whether the US-Turkey “agreement” over the fate of Kurdish forces in the “safe zone” in northeastern Syria might cause any negative outcomes for Moscow's own ideas for fixing Syria's problems.

Following the seemingly intense discussions between Ankara and Washington on Oct. 17, Erdogan’s remarks Oct. 18 sounded rather reassuring for Moscow.

“Our aim is to reach a reconciliation with Russia about those matters that are reasonable and acceptable to everyone,” Erdogan told reporters about his Oct. 22 trip to Sochi for talks with Putin.

"Our goal is that PKK terrorists are cleared from the territories that are now under control of the Syrian regime. In this case, [even] if regime keeps control over Manbij we won’t have a reason to worry,” Erdogan said. The PKK is the Kurdistan Workers Party, which Turkey has been fighting for four decades.

The Russians reiterated Moscow’s empathy for the “legitimate right” of Turkey to make itself safe from the groups it deems terrorist but also reminded the Turkish side of concerns that Operation Peace Spring not violate the “territorial integrity” of Syria and not sink Astana group efforts on launching the political process in Syria via the constitutional committee. The Turks, in turn, reassured the Russians of Ankara's commitments to the process. The convening the constitutional committee in Geneva is set for late October.

Ankara wasn’t the only stop for the Russian envoy. On Oct.16, the day before their visit to Turkey, Lavrentiev and Vershinin were in Tehran meeting with the secretary of the Supreme National Security Council of Iran, Ali Shamkhani, and the Iranian foreign minister’s senior aide for special political affairs, Ali Asghar Khaji.

The latest situation in northeast Syria and Turkey's military operation in the region dominated the talks.

The parties “confirmed the shared conviction that a strong and long-term stabilization on the eastern bank of the Euphrates River, in Syria and in the region in general, is only possible if it is based on the reinstated sovereignty, unity and territorial integrity of Syria,” the Russian Foreign Ministry's readout said.

The press release of the Iranian Foreign Ministry added, “While reviewing developments related to the Astana process and the issue of the formation of a constitutional committee and its commencement in the near future, they also accentuated the necessity of establishing the Syrian people's future without any foreign intervention.”

The ministers “expressed a common view on the necessity of attaining a secure and lasting stabilization on the eastern bank of the Euphrates River based on respect for the sovereignty and territorial integrity of the Syrian Arab Republic by starting a dialogue between Damascus and Ankara as well as between the Syrian authorities and the local Kurds. The parties emphasized that both Russia and Iran are prepared to assist in such meetings,” the Russian Foreign Ministry said.

The next day, on Oct.18, the top Iranian diplomat had separate phone talks with the foreign ministers of Iraq and Syria over the situation in northern Syria. Just when Zarif was talking to his Syrian counterpart Walid Muallem, Lavrentiev and Vershinin were already negotiating with President Bashar al-Assad.

“The Russian side emphasized Russia’s rejection of any step or action that violates [Syria’s] sovereignty and further complicates the situation and affects efforts to end the war in Syria, which depends first of all on eliminating the remaining terrorist hotbeds in Syria and regaining control over all Syrian territories, including all border areas,” Syria’s pro-government SANA news agency reported.

“The meeting also discussed the preparations underway for holding the first meeting of the committee for discussing the constitution,” SANA added.

Lavrentiev also briefed Assad on the outcome of Putin’s recent visits to Saudi Arabia and the United Arab Emirates.

All of the statements point to at least three things.

First, as Al-Monitor predicted, Moscow seems to be willing to give Tehran more leverage in the situation in northeastern Syria to get Ankara to embrace the Adana agreement. Together with Egypt, Iran was a co-guarantor of the original Adana deal of 1998, in which Syria ended support for the PKK.

Second, Russia seems to want to turn the page on the “hot phase” of the situation in the Jazira region as soon as possible and resume the work on the political settlement of the war in Syria. As part of the effort, contours of the Russian vision include the launch of formal talks between Damascus and Ankara as well as elaboration of a bigger deal between Syrian authorities and local Kurds. In this sense, Erdogan’s acceptance of regime control over Manbij providing there are no SDF forces is a good sign that Ankara has started to think in political rather than military terms vis-a-vis this matter.

Third, as important as the lucrative business deals were for Russia a result of Putin’s tour around the Gulf, the Russian president may have secured something critical — Saudi and Emirati consent to have Syria back into the Arab League. It likely won't mean that Assad will now be sitting next to Saudi, Emirati and other rulers who have struggled against him over the past years, but there could be a formula under which Syria breaks through the isolation and gradually restores political and, most importantly, economic ties with regional actors. If Putin indeed pulled off this trick, Erdogan may find himself as the only one still opposed to working with Damascus and may eventually come around.

In all of these calculations, and considering the emergency shuttle diplomacy the Russian envoys undertook over the last three days, there doesn’t seem to be a place for the American deal with Turkey.

“First, we were a bit confused over the announcement of the deal, to be honest,” said a senior Russian diplomat who agreed to speak to Al-Monitor not for attribution.

He said, “Then we looked at it on its merits and realized two things. For the Americans it was mostly about the domestic posture of President [Donald] Trump. Actually, his letter to Erdogan, despite the manner of its language, was loaded with some insightful proposals. But language matters when you work with an Oriental country, so that failed and he sent the team that negotiated something Trump could sell to his electorate. For the Turks, we thought it was more important since they received some things they long wanted and some of them can actually reinforce their … position now. But we decided to keep on doing our thing and not to look where they stand but where we stand.”

Under the US-Turkey deal, the Turks agreed to suspend their incursion into Syria for five days — 120 hours — until Oct. 22.

Hence, the takeaway most Russian policymakers seem to be having is that after 120 hours, this agreement, which looks like a “carriage” that takes Erdogan deep into Syria, will turn into a “pumpkin.” That is also when Erdogan goes to Sochi for the Oct. 22 talks and possibly could negotiate a deal that could crown his own — and Russia’s success — in elaborating a potential long-term solution to the crisis.