Hamas in Moscow to mend ties with Syrian regime

Hamas chief Ismail Haniyeh's visit to Moscow is seen as a potential move to repair relations the Syrian regime. 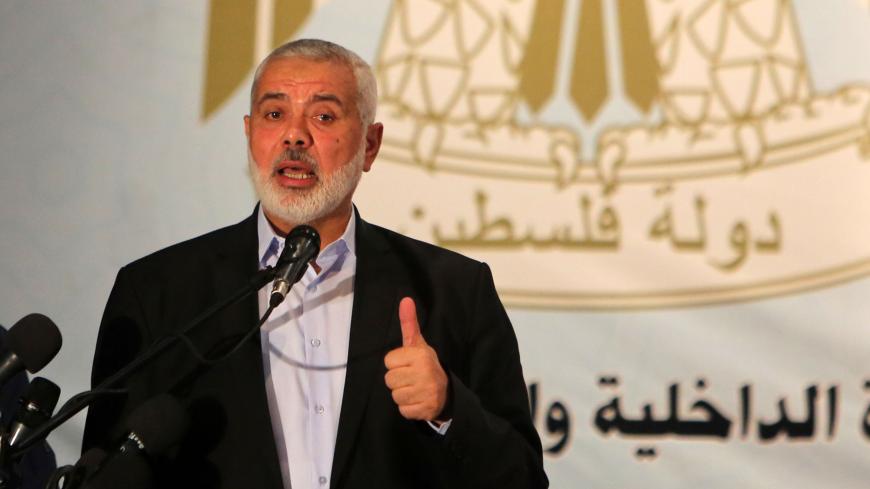 GAZA CITY, Gaza Strip — Hamas leader Ismail Haniyeh said March 4 that his movement supports the sovereignty of the Syrian government over all Syrian territories. At a press conference in Moscow, Haniyeh said the Syrian regime and people have given nothing but great support to Hamas for many years.

“We had been present in Syria for 10 years," he said. "We cannot forget this history. There is no policy or any decision by Hamas to engage in the Syrian issue, and I firmly deny the presence of any fighter or martyrs of Hamas in Idlib, or before the [events] of Idlib, or even in the Syrian revolution.” He expressed hope that stability and security would return to Syria so it could return to exercising its natural role in the region.

With the outbreak of the Syrian civil war, relations between Hamas and the Syrian regime deteriorated. Hamas opted for an impartial stance in the Syrian internal conflict, siding with the Syrian revolution, and its leaders left Damascus in 2012, though they had been present in Syria since 2001.

Haniyeh’s statements came after he met with several Russian officials in Moscow, mainly Lavrov. During the meetings, Hamas political bureau chief expressed the movement’s readiness to play a role in resolving the conflict in northern Syria.

An official at the Russian Embassy in Ramallah, who asked not to be identified, told Al-Monitor, “Haniyeh’s meeting with the Russian foreign minister touched on several Palestinian issues at home and abroad, including the situation in Syria.”

The source added that Hamas did not explicitly request Russia to intervene to restore ties between the movement and Damascus.

The source indicated that the statements of Hamas leaders toward the Syrian regime are positive and could pave the way for Russia to mediate between the two in the future. This is especially true since Moscow stands at an equal distance from Damascus and Hamas. Moscow also views the Islamic movement as a main component in the Palestinian arena since it won the legislative elections in 2006.

The Syrian regime has been preoccupied with restoring control over the remaining areas under the authority of opposition armed groups, particularly in northern Syria, according to the source.

He expected that Damascus would soon reconsider its foreign relations, including the regime’s ties with Hamas.

Following the election of a new leadership in 2017, Hamas has pursued a policy of openness and made efforts to repair ties with the Syria-Iran-Hezbollah axis, which deteriorated during the Syrian war, given Hamas' stance on the internal conflict.

In recent years, Hamas restored with Hezbollah and Iran, which prompted the latter to resume financial and military support in March 2019, after several visits by the new Hamas leadership to Tehran.

Hamad al-Raqab, a leader in Hamas, told Al-Monitor, that his movement does not veto any decision for reconciliation except when it comes to Israel, stressing that relations with Damascus go back a long time and that Hamas has expressed on more than one occasion its wishes for calm and stability in Syria and other countries in the region.

On the possibility of Russia acting as a go-between for any Hamas-Damascus reconciliation, Raqab said, “I don’t have any information on this. We, in Hamas, prefer not to talk about this in the media.”

He added that Hamas has a wide network of relations in the region, as it has made efforts to help resolve conflicts in some Arab countries, particularly in northern Syria. Raqab said that the United States and Israel benefit from the ongoing conflict in the Syrian territories.

After the election of a new Hamas leadership in 2017, attempts have been made at reconciliation between Hamas and Damascus.

Tehran and Hezbollah have tried and failed to restore relations between the two. These attempts, however, prompted the Syrian regime to tone down its rhetoric against Hamas.

Abdel Sattar Qassem, a professor of political science at An-Najah National University, told Al-Monitor that he expected reconciliation between Hamas and Syria this year. “I have good relations with several personalities in Lebanon and Syria, many of whom are making positive efforts to restore relations between the two in the coming period,” he said.

Iyad al-Qara, a political analyst close to Hamas, told Al-Monitor that Hamas and Russian officials discussed the possibility of reconciliation during the Moscow meetings, noting that Russia has what it takes to mediate, given its good relations with both sides.

Hamas is banking on Russia to rearrange the situation in the Arab region, including Hamas' relations with Damascus, especially since the regime now controls most of Syria, and, with the help of Russia, aims to retake the north.