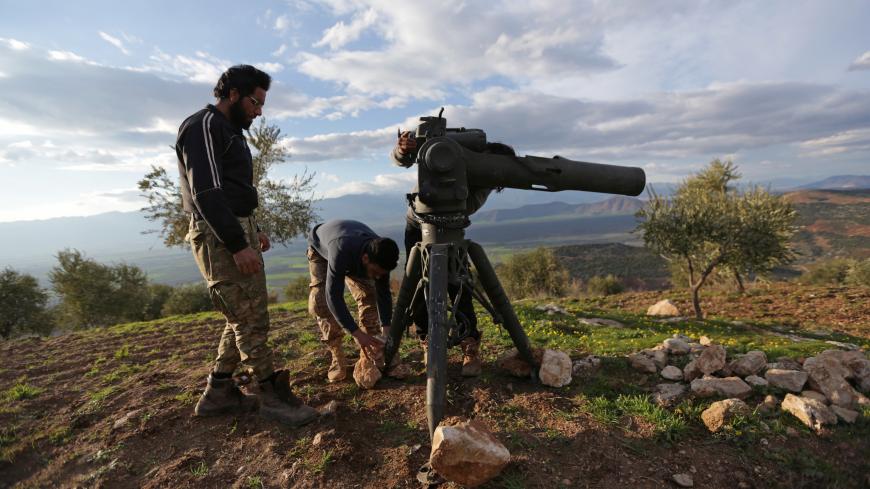 Turkey opened fire on hundreds of fighters loyal to Syrian President Bashar al-Assad. The fighters arrived in the Kurdish-controlled Syrian province of Afrin on Feb. 20, news reports said, as Damascus disregarded Ankara’s warnings against coming to the aid of the Syrian Kurdish militia fighting a Turkish military assault.

The confrontation came just hours after Turkish President Recep Tayyip Erdogan said he had prevented any such incursion by Syrian government forces after speaking to Russian President Vladimir Putin and Iranian President Hassan Rouhani, Syria’s benefactors, and that Turkish troops and their allies in the Free Syrian Army (FSA) would besiege the provincial capital in a matter of days.

Later, Erdogan said that the groups, which he described as “Shiite militias in a few pickup trucks,” had acted independently and that Turkish artillery fire had repulsed the fighters. CNN Turk cited unidentified sources as saying the pro-Assad militias would not attempt such a show of force during daylight hours. Other reports could not confirm the militias had turned back.

“In my calls with Mr. Putin and Mr. Rouhani, we had already reached agreement on this," Erdogan said at a televised news conference. "Unfortunately, terrorist groups like these sometimes make missteps according to their own decisions. It is not possible for us to allow this. They will pay a heavy price for this."

The foray threatens to pit adversarial neighbors Turkey and Syria in outright conflict in a country already fractured by seven years of war that has ensnared regional powers, as well as the United States and Russia.

Last month, Turkey invaded Afrin, in an operation it dubbed Olive Branch, to repulse the Kurdish People's Protection Units (YPG) from its border and block it from consolidating territorial gains and the political autonomy it has carved out in northern Syria since 2011.

Kurds being supported by Shiite militias is but the latest twist in Syria’s complex maze of alliances.

Ankara said the YPG is an extension of the Kurdistan Workers Party, which it deems a terrorist organization for taking up arms against the Turkish state in 1984 at a cost of more than 40,000 lives. An autonomous Kurdish entity on its borders would pose the gravest of security threats, Turkey said.

Assad agreed to send forces to the YPG’s aid in Afrin, Syrian state news agency SANA said on Feb. 19, after the Kurds had appealed for help to protect the border. Syria has repeatedly blasted the Turkish incursion as a violation of its territorial sovereignty, even if the Kurds administer Afrin outside of Damascus’ control.

In response, Turkey warned Assad that his war-town country could face dismemberment.

The Kurds being supported by Shiite militias is but the latest twist in Syria’s complex maze of alliances. Much to Turkey’s ire, the YPG has fought with the United States to expel the Islamic State from much of Syria. Yet it has at times cooperated with pro-Assad forces and enjoys strong historical links with Moscow, which built a military facility in Afrin to train Kurdish forces before withdrawing ahead of Turkey’s entry.

US Secretary of State Rex Tillerson visited Ankara last week to rescue battered ties between the NATO partners, severely tested by the Pentagon’s support of the YPG since 2014. Clashing objectives in Syria even had Turkey warning that its forces could come into contact with US soldiers.

Tillerson spent three hours huddled with Erdogan on Feb. 15 in what was “a productive and open conversation,” a State Department official said. The US-Turkish detente unnerved both the YPG, worried about flagging US support, and Moscow, which has exploited the rift with Washington to pull Turkey into its orb, Posta newspaper reported.

But Aaron Stein, a senior fellow at the Atlantic Council in Washington, noted that the YPG had been in talks with the Syrian government on working together in Afrin well before Tillerson’s visit.

“This isn’t the US zone of influence in Syria; this is the Russian and Turkish zone. This is their mess to deal with. … The Americans don’t really have a vote,” Stein told Al-Monitor.

“The Syrian regime has decided to send in official militias who will make life extremely difficult for Turkey and, I think, for the Russians too,” he said, because it could undermine Turkish support for de-escalating fighting in neighboring Idlib province, the largest anti-Assad bastion left in Syria, an arrangement brokered by Moscow.

Earlier on Feb. 20, Erdogan said plans by Assad to send fighters to Afrin “were halted in a serious sense … after the talks” with Putin. In their telephone call, Erdogan warned Putin that “serious consequences” would emerge should Assad deploy forces to Afrin, Hurriyet reported.

“Operation Olive Branch will continue with determination. If the regime enters Afrin, it will be taking a risk and serious consequences will occur,” the newspaper quoted Erdogan as telling Putin. In response, Putin told Erdogan, “We remain committed to the agreement we reached,” Hurriyet said.

Turkey’s push into Afrin relies on the consent of Russia, which controls Syrian airspace and allows Turkish jets to provide air cover to soldiers and the FSA faction helping it battle the YPG. When Moscow restricted access to the skies above Afrin earlier this month, Turkey suffered its heaviest losses in the monthlong campaign.

Erdogan said on Feb. 20 that 32 Turkish soldiers and 715 “terrorists” have been killed in Afrin. The Britain-based Syrian Observatory for Human Rights puts the death toll at 205 FSA fighters and 39 Turkish soldiers, as well as at least 219 YPG members. It has also documented 112 civilian deaths.