A government-promoted push for the "native and national" in almost every realm has reached the sphere of cryptocurrency despite Turkey's lingering mistrust of bitcoin. 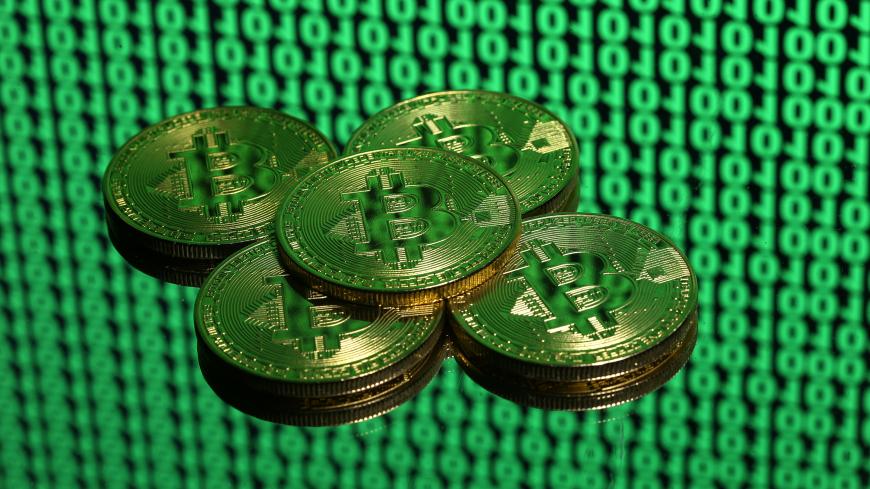 Tokens of the virtual currency bitcoin are seen placed on a monitor that displays binary digits in this illustration picture, Dec. 8, 2017. - REUTERS/Dado Ruvic

The alliance between Turkey’s ruling Justice and Development Party (AKP) and its de facto partner, the Nationalist Movement Party (MHP), has extended to an unlikely realm: the idea to develop Turkey's own bitcoin.

Amid bitcoin’s meteoric rise last year, the Turkish government had taken an unwelcoming stance toward the cryptocurrency. Ministers likened it to a pyramid scheme and warned citizens to stay away. The MHP, however, argues that instead of dismissing cryptocurrencies, Ankara should draw up legislation to regulate and control the market. MHP deputy chair and former Industry Minister Ahmet Kenan Tanrikulu has penned a detailed report on the issue, proposing the state-controlled release of a “national bitcoin” called "Turkcoin."

For Tanrikulu, missing out on blockchain, the underlying technology of cryptocurrencies, would be a serious mistake. “The world is advancing toward a new digital system. Turkey should create its own digital system and currency before it’s too late,” he told Al-Monitor.

The politician stressed that cryptocurrencies were already in use in Turkey, despite the lack of a legal framework. “The need for regulation is obvious,” he said. “Also, the use of those currencies in illegal activities must be prevented.”

He continued, “We need to create the infrastructure for the blockchain database. There are nearly 1,400 digital currencies in the world today and many countries are using them. We, too, can create a digital currency, based on companies in the Wealth Fund. Since the demand exists, we should create and release our own digital currency. Opposing those currencies is meaningless. This is a national issue which requires a national consensus.”

Tanrikulu’s 22-page report draws attention to the legal vacuum on the issue. “The Turkish Penal Code contains the provision that no one can be punished … for acts that are not overtly considered a crime in the law. Based on this provision, the use of cryptocurrencies can be considered legal since our law contains no prohibition,” the report says. “Thus, buying and selling with cryptocurrencies and creating money through bitcoin mining are not within the scope of criminal activity in Turkey today. Many enterprises accept payment in cryptocurrencies, and the number of customers using those currencies is rapidly increasing.”

The report also proposes the creation of a state-controlled bitcoin bourse. “Preventing tax evasion, money laundering and swindling should be given priority in the work for new regulations,” it says. “The introduction of encouraging regulations after assessing all kinds of risks would enable us to generate revenues from the cryptocurrency market, especially from bitcoin. In this context, the country needs a bitcoin bourse and legislation to regulate this realm.”

The Finance Ministry and the Capital Markets Board have already started work on the legal vacuum that is expected to result in new regulations. Tanrikulu said his party would lend parliamentary support to bills aimed at regulating and taxing cryptocurrencies.

Though the government maintains its stance toward bitcoin and other digital money, the idea for a national cryptocurrency seems to have better prospects. In a Feb. 7 interview, Deputy Prime Minister Mehmet Simsek, who oversees the economy, said the government would launch preparations for a national cryptocurrency. He argued that the use of cryptocurrencies remains illegal and risky in Turkey at present, but added, “We are planning to start our own work on digital currencies. We place high importance on digitalization.”

In fact, a Turkish company has already invested in a project to create a local cryptocurrency and is reportedly planning to make the money available soon.

In the MHP’s proposal, large public assets in the Wealth Fund such as Turkish Airlines, the Istanbul Stock Exchange, the gas company Botas, Turk Telekom, Ziraat Bank and the National Lottery would serve, in a sense, as its “insurance policy.” Investments in the currency would appreciate at least as much as those in the companies in the Wealth Fund, but high demand would mean higher appreciation. The profits may not reach bitcoin’s 1,700% per year, but the risk of a 70% slump in a month would be also nonexistent. As such, the proposed Turkcoin more closely resembles asset-backed securities than existing cryptocurrencies. Low risk combined with profits higher than the yields of sovereign bonds could make the currency attractive to aspiring investors.

After a global frenzy, cryptocurrencies have seen a massive tremor in the past month and a half. The price of a bitcoin, which had climbed to nearly $20,000 in December, plunged below $6,000 in early February before a partial recovery since then.

Amid the panic among investors, advertorial stories began appearing on Turkish websites about people enjoying bitcoin wealth. Headlines such as “How the declining bitcoin made me a millionaire at age 26” work to rekindle demand, the most important factor that keeps cryptocurrencies standing.

After the recent crash, many have come to wonder whether cryptocurrencies do have a future. Could they plunge even further? The demand on the market will answer the second question, while on the first, financial giant JP Morgan predicts that cryptocurrencies “are unlikely to disappear completely and could easily survive in varying forms and shapes among players who desire greater decentralization, peer-to-peer networks and anonymity, even as the latter is under threat.”