Can Tunisia’s economy be saved?

Due to financial crisis, Tunisia's foreign currency reserves have hit a record low, and some goods have been banned from importation. 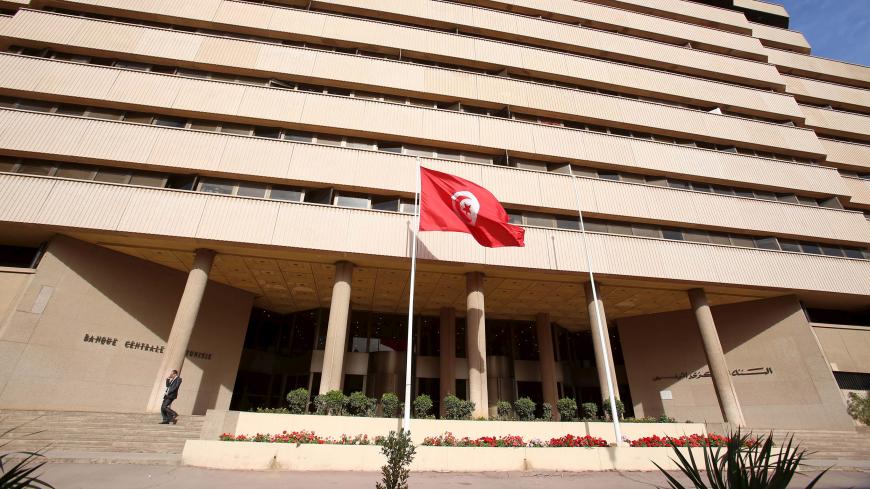 A man walks out of the Central Bank of Tunisia, Tunis, April 27, 2016. - REUTERS/Zoubeir Souissi

Seven years after the ouster of President Zine El Abidine Ben Ali in January 2011, Tunisia continues to struggle with economic and consequent social crises that democracy and respect for basic freedoms cannot alone alleviate. The financial crisis has proven to be the most challenging of Tunisia's problems.

Data published by the Central Bank of Tunisia on Jan. 25 revealed that the growing trade deficit has led to the further erosion of the country's foreign currency reserves. The bank’s website indicated that reserves had dropped to 12.3 billion dinars ($5.1 billion) on Jan. 23, enough for 89 days, a 15-year low. At the end of 2016, reserves had been sufficient to cover 106 days.

Harshi attributed the current decline to a “rising deficit in the trade balance, which reached 15.5 billion dinars [$6.5 billion] in 2017, compared to approximately 12.6 billion dinars [$5.3 billion] in 2016, according to figures from the state-affiliated National Institute of Statistics. Oil prices are also fluctuating, and imports have soared. I believe this is what pushed the Central Bank to release a list of nonessential imports to limit the drop in foreign currency.”

Central Bank Gov. Chedly Ayari had on Nov. 14 issued a directive prohibiting Tunisian banks from lending to traders to fund the import of around 220 consumer products, including mineral water, wine and other alcoholic beverages, chocolate, marble and cosmetics.

An official at the Central Bank of Tunisia told Al-Monitor on condition of anonymity that the bank’s foreign reserve balance had dropped due to the local black market in foreign currency and dwindling foreign investments and exports. He blamed the security and political situations for this state of affairs.

Also according to the source, any government plan to overcome the current financial crisis will require encouraging exportation and controlling importation, including limiting the import of nonessential commodities for which there are locally produced substitutes, because the imports drain the foreign currency reserve. In addition, the currency black market should be eliminated or integrated into the official market. Most important, a positive business environment, supported at the security, military and political-administrative levels, should be created to promote foreign investment.

Laila al-Chatawi, a member of parliament's Fiscal and Development Committee, told Al-Monitor, “Part of the economic and financial crisis in the country is linked to the law and order situation, as there is a parallel economic network operating outside the official economy and trading in foreign currency outside the official banking framework.”

“For this reason,” Chatawi said, “the competent security authorities should limit the black market, which is draining huge financial resources and contributing to money laundering. I am afraid we might be classified among high-risk countries that are noncompliant with the anti-money-laundering [AML] standards as per the Basel AML Index.”

Tunisia ranks 59th on the Basel AML Index. The European Union had designated Tunisia a tax haven in December 2017, but removed it from the list on Jan. 23.

According to a study published in November by the Tunisian Institute for Strategic Studies, a government research center, the parallel economy contributes to almost 20% of gross domestic product and employs 31% of the work force.

In August 2016, Prime Minister Youssef Chahed had promised in his acceptance speech that his administration would work on “fulfilling five important priorities, including controlling financial balances.” A year and a half later, Tunisia's financial and economic problems have pushed people to take to the streets to protest against social conditions. They also object to the austerity measures that the government has implemented to address the crisis, such as increasing the price of basic consumer goods. These measures have jeopardized social peace.

Ahmed al-Mannai, the director of the Tunisian Institute for International Relations, told Al-Monitor, “The democratic transition that the country has been undergoing for seven years cannot survive amid the economic crisis. The middle class, which has always supported democracy, is struggling the most in Tunisia amid the erosion and loss of its purchasing power. Any governmental bet on stability and on seeing the democratic transition through cannot happen without an economic policy boosting the situation of the middle class and reducing social inequalities. Small and medium-sized enterprises should be promoted, and fiscal justice should be imposed all the while fighting corruption, which has soared in the past years.”

Mannai added, “Chahed addressed the international conference organized by the International Monetary Fund and the Arab Monetary Fund in Marrakech Jan. 30. He said that economic development can only happen in a healthy social environment, which itself cannot be achieved without economic development. This leaves us with a complex and contentious situation. For this reason, people are nostalgic for the former regime, because democracy — despite securing individual and political freedoms — has failed to fulfill their economic aspirations. This could endanger democracy in the future.”

The economic crisis in Tunisia is intertwined with the events of the past seven years. The central government’s authority weakened, terrorist operations increased and political confrontations over power sharpened. All of these factors have contributed to Tunisia’s current situation.

Still, the ruling coalition shares responsibility because it has not provided the political stability necessary for economic development. Rumors of a change in the current government are circulating, but that would only further harm the economy. The successive governments following the 2011 uprising have deprived the country of stability and prevented politicians from implementing their programs.