The Tunisian government just received another part of its loan from the International Monetary Fund and assures citizens it is taking appropriate measures to solve the country's economic crisis. 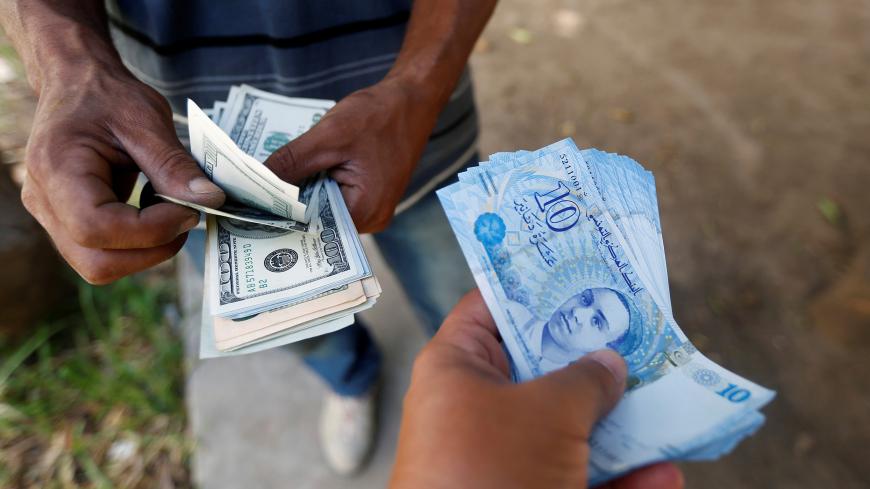 TUNIS — More than any time in the country's past, Tunisia must now engage in reforms to ease the financial and economic strains affecting its trade and balance of payments, according to the governor of the Central Bank of Tunisia, Marouane el-Abassi.

The International Monetary Fund (IMF) this month approved the fourth tranche of its $2.8 billion loan to Tunisia, which was arranged in 2016. The $250 million payment brings IMF's total loans to Tunisia so far to approximately $1.14 billion. Speaking at a July 11 press conference in Tunis, Abassi said the country will focus on solving its own economic crisis rather than on participating in the international financial market.

Tunisia is continuing efforts to ensure price stability and prevent inflation from entering double digits. The rate, which had been 4.25% in May 2017, reached 7.8% in June 2018 and could rise to 9% by the end of the year, experts say. In a move aimed at slowing the increase, the Central Bank of Tunisia raised its benchmark interest rate 100 points last month to 6.75%.

Also, the decline in foreign exchange reserves in Tunisia has accelerated since 2017 as a result of a spike in the trade balance deficit and diminished exchange rates in the local currency. According to daily exchange rates published July 14 by the Central Bank, the Tunisian dinar recorded a new low, reaching 3.085 against the euro and 2.640 against the US dollar.

The dinar has continued to decline as a result of economic challenges, compelling Tunisia to raise the price of various goods and impose new tax measures. The government announced June 22 that for the third time in six months it will raise gasoline and fuel prices by around 4%, under pressure from international lenders including the IMF, to implement a reform package to reduce the budget deficit.

However, Energy and Mining Minister Khaled Kaddour also blamed the hikes on a rise in oil prices on global markets.

Marwan al-Dabash, general director of the Societe des Transport de Tunis, a public company that manages passenger transportation via bus and light rail networks in Tunis, and head of Volkswagen AG's Tunis operations, shared with Al-Monitor information about the auto market in Tunisia this year. Because the value of the dinar dropped, cars have become expensive, so purchases are down. Also, car imports dropped by 20% in the first half of 2018, due in part to the impact of various increases in consumer tax, customs tax and other fees imposed under the finance law.

Similarly, Nouraldin al-Taboubi, general secretary of the Tunisian General Labour Union, confirmed in a July 3 statement to Maghreb Street newspaper that meat and food prices in Tunisia, which used to be comparable with those in Europe, are now much higher. According to him, the ruling coalition is largely to blame for the country's tough economic conditions.

Tawfik al-Oreibi, a member of the Tunisian Confederation of Industry, Trade and Handicrafts, told Al-Monitor the Tunisian economy suffered in the aftermath of the country's 2011 revolution due to protests that interrupted production in development and transport segments. Phosphate production in Tunisia in 2010 reached about 8 million tons but decreased to less than half that last year because of ongoing strikes at the mines. Foreign borrowing plunged after the revolution. The state budget deficit in 2011 was 1% of gross domestic product, while it amounted to 6.1% at the end of 2017.

Economic expert Reza Retha Bin Mohammed, who works for La Societe Tunisienne de Banque, confirmed to Al-Monitor that the decline of the dinar will compound Tunisia's economic woes possibly by increasing the trade deficit through raising the country's foreign debt, which is paid in euros. The decrease of the dinar's value in relation to hard currencies like the euro and dollar will then necessarily lead to price hikes since the price of all imported materials will rise with the devaluation of the dinar.

Bin Mohammed said Tunisia's weak security has contributed to increased fears among tourists and investors, especially from Europe, about terrorist incidents similar to the deadly attacks targeting the Bardo National Museum and the Sousse beach resort in 2015. These events led to a drop in Tunisian tourism: The tourism sector currently accounts for around 8% of the country's GDP — compared with 10% before 2011 — and is a major source of hard currency and employment.

Moncef Sellami, a leader in Tunisia's Nidaa Tunis party, told Al-Monitor that the government will not reach solutions by itself. Rather, he said, all Tunisians must cooperate in salvaging the country from its grave economic circumstances by promoting production and stepping up their efforts in the workplace. Sellami called on Tunisians to reduce consumption and increase production to maximize exports.

The biggest challenge facing the Tunisian government will be providing more job opportunities to new graduates. For the third consecutive year, as a condition of its IMF loan, the government is adopting a budget-oriented austerity plan for fiscal year 2018 centered on a hiring freeze in the government sector until 2020. This will amplify pressure on the government amid an ongoing unemployment crisis — one that is hitting hardest the 29.3% of young Tunisians with university degrees in 2018, said Minister of Development, Investment and International Cooperation Zied Ladhari in May. This comes as the national unemployment stands at 15.4% this year, compared with 15.5% in 2017, according to the National Institute of Statistics.

Correction: July 30, 2018 An earlier version of this article stated that Moncef Sellami is a leader in Tunisia's Ennahda Party. He is a leader in the Nidaa Tunis party.