The State Department has approved US exports that will help a UN agency set up nuclear monitoring stations inside Iran to strengthen the nuclear deal. 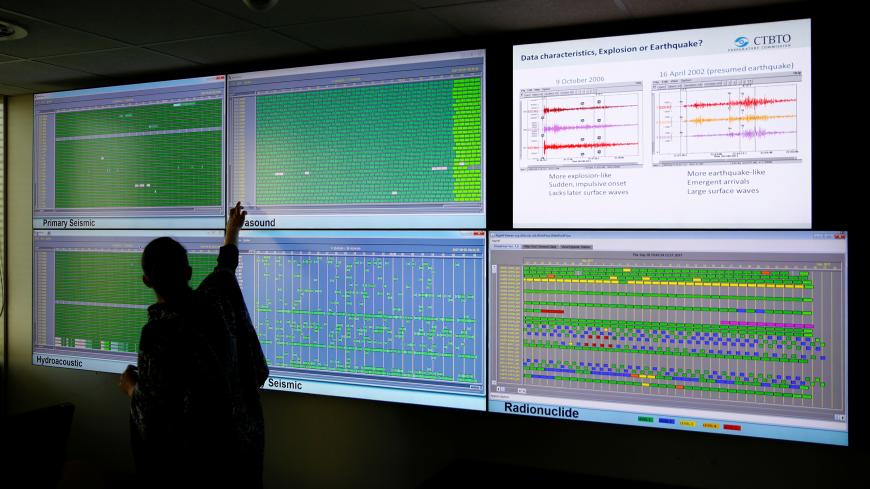 Am employee points at screens in the control room of the Comprehensive Nuclear-Test-Ban Treaty Organization at its headquarters in Vienna, Austria, Sept. 28, 2017. - REUTERS/Leonhard Foeger

The Donald Trump administration is allowing high-tech US exports to Iran that could boost international oversight of the 2015 nuclear deal.

US Deputy Secretary of State John Sullivan signed a waiver that allows a Maryland-based company to export broadband networks, satellite dishes and wireless equipment to Iran for stations that monitor nuclear explosions in real time. Under laws that came into force after the Iran-Iraq War, the United States restricts "dual-use" exports that could be used to develop nuclear weapons.

The State Department notified Congress of the move Jan. 5, according to correspondence viewed by Al-Monitor. It is not the first time the United States has allowed exports of digital technology to Iran: In 2010, the State Department also granted a waiver to allow US companies to export chat, email and social networking software to Iran, an effort to strengthen free speech rights.

The monitoring equipment was requested by the Comprehensive Nuclear-Test-Ban Treaty Organization (CTBTO), which oversees a global ban on nuclear test explosions. Though the United States and Iran are among eight nuclear or atomic-aspiring nations that haven’t ratified the 1997 treaty, organization officials have nevertheless set up three sites in Iran to transmit explosion data back to Vienna, giving US and other policymakers a live, independent channel to watch the Islamic Republic’s nuclear activity.

“It’s like an earthquake detection system — it’s going to detect a very large detonation,” said Daryl Kimball, executive director of the Arms Control Association. “If we think that the Iranians have somehow, someway detonated a nuclear device, we want to prove that using a data network that can show its work.”

Hughes Network Systems, the Maryland-based company contracted in October to put in place a communications backbone behind the verification sites, is tasked with transmitting explosion data between Iran and the United States. The CTBTO has certified a seismic station for use in Tehran and two more at Kerman and the western city of Shustar, with three more sites on the way.

The waiver to provide the equipment comes as Trump faces a May 12 deadline to decide whether to stay in the 2015 nuclear agreement. In January, he extended a waiver on sanctions against Iran to keep the United States in the nuclear deal, but warned Congress and European allies that it would be the last postponement he would grant without Britain, France and Germany making “radical” changes to the pact.

On Monday, The New York Times reported that the State Department continues to pressure Europe to impose stricter limits on Iran’s testing of ballistic missiles, give weapons inspectors better access to Iranian military sites and extend certain nuclear restrictions under the deal. Pact signatories Russia, China and Iran would also have to agree for the changes to take effect.

Correction: March 5, 2018. This article has been updated to clarify that the US is concerned that Iran could develop nuclear weapons but that no such program is known to currently exist.