Tribal laws determine fate of IS families in Iraq

The war has come to an end in Iraq’s western and northern areas, occupied by the Islamic State in 2014, but another battle has broken out between IS families and tribes whose members were killed by the group during its control of Ramadi and Mosul. 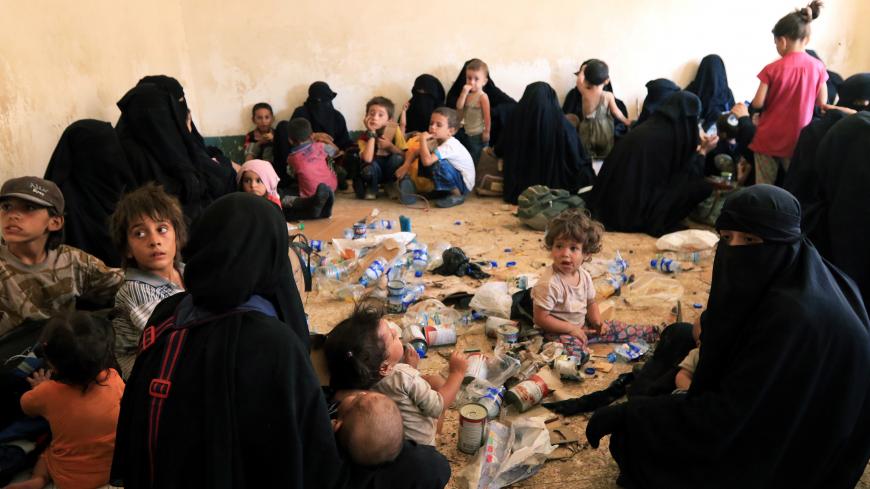 Families and relatives of Islamic State militants are seen after they surrender to the Kurdish peshmerga forces, al-Ayadiya, Iraq, Aug. 30, 2017. - REUTERS/Ari Jalal

Although the displaced can now return to their homes in Ninevah, Anbar and Salahuddin provinces, tribes whose members were victims of the Islamic State (IS) are preventing IS-affiliated families, most of which are children and women, from returning.

On Feb. 5, the Ministry of Labor and Social Affairs said it treats children of IS fighters as victims and is working to integrate families in two camps, one in Ninevah and another in Anbar. But this does not mean that the families will be allowed to return to their home areas, because victims' families and tribes still seek revenge.

IS killed 16 members of the Albu Nimr tribe, one of the most prominent tribes near the city of Ramadi in Anbar province, in early December 2014. They were found dead in a well 10 kilometers (6 miles) from the western town of Hit after IS had kidnapped them.

Albu Nimr tribe member Omar al-Anbari expressed the tribe's great hatred toward IS members from the same area. He told Al-Monitor, “It is impossible to tolerate the terrorists who slaughtered members of our tribe. They ought to be killed in the same places where they committed their atrocities.”

It seems that this stance against the return of IS families has united tribes across Anbar, Mosul and Salahuddin who fought against the group.

Last summer, on July 13, Human Rights Watch accused the security forces of forcibly transferring about 170 people allegedly affiliated with IS to a rehabilitation camp east of Mosul. The city council had issued a circular June 19 calling for the transfer of “IS families” to rehabilitation camps, which poses questions about the fate of IS members, their presence and the Iraqi government's procedures for dealing with them.

On June 20, authorities in Ninevah announced that they were not prepared to receive IS families that were sent away.

Louizi attributes the establishment of isolated camps for families with IS relatives to “security reasons related to the danger these families could pose should they return before security procedures and investigations are completed. Meanwhile, it seems tribes have the biggest say in determining these families’ fate.”

Louizi said, “Tribal norms have strict laws on retribution for those accused of murder, and they demand that anyone who commits a murder or a harmful act against someone’s property be killed or forced to pay for it with money or provide any other material compensation.”

As for the rest of the liberated areas, he said, “There are no accurate statistics. The numbers are many and there are entire villages that have been involved with IS and fought alongside the group, such as the village of Shoura in Ninevah, the residents of which ended up in camps when IS members fled the area.”

Louizi added, “Some tried to move back to their areas, such as in Salahuddin, but the authorities — and the pressure the tribes are placing on them — forced IS families to return to the camps.”

According to Louizi, one of the reasons these families are prevented from returning is that “many of their IS-affiliated relatives fled to Turkey and Syria and they could possibly still be contacting their families, which poses a future threat to security and stability.”

In Ramadi, the head of the security committee in the province, Naim al-Kaoud, told Al-Monitor that “900 members of IS-affiliated families are being held in two camps, pending security measures and tribal reconciliation for those who were not involved in the killings.” He said, “Tribal norms in western areas dictate that the murderer must be removed from the area of the incident — even under peaceful conditions.”

Kaoud added, “Detainees who were proven innocent after investigation and are not in contact with their IS-affiliated relatives will be allowed to return home.”

However, the head of the Anbar Rescue Committee, Sheikh Mohammed al-Hayes, appears to be stricter in this regard. “If families of IS members were ever allowed to coexist alongside tribes, it would be a betrayal to all those who sacrificed their lives. These families still pose a threat because they will be a new breeding ground for terrorism in the future,” he told Al-Monitor.

In August 2016, the Salahuddin provincial council decided to “immediately expel” the relatives of IS members, for a period of 10 years to life, outside their areas of residence in order to avoid acts of tribal revenge.

Iskandar Watut, member of the parliamentary Committee on Security and Defense, told Al-Monitor that there are about 4,000 IS members detained in the Kurdistan Region, along with many of their families..

He said he understands the tribes’ point of view but sees the possibility of these families returning to their normal lives after detention.

“By virtue of the law and after the investigations, the judiciary must determine their fate. They should only be allowed back once they complete intellectual and psychological rehabilitation to be able to reintegrate into society,” Watut said.

The spokesman for the High Commission for Human Rights in Baghdad, Ali al-Bayati, told Al-Monitor, “Iraq needs psychological, cultural and social rehabilitation centers in order to deal independently with each of the victims affected by terrorism and families whose children were brainwashed by IS.”

In the end, tribes will have the final say, more so than the law and the rehabilitation procedures, since the liberated areas are of a tribal nature, governed by strict laws that are more effective there than the law of the state.