Iraqi tribes seek to heal enduring wounds of IS legacy

Sunni tribes in Iraq that were under the control of the Islamic State for about three years are working toward social reconciliation to end lingering conflict and incidents of revenge. 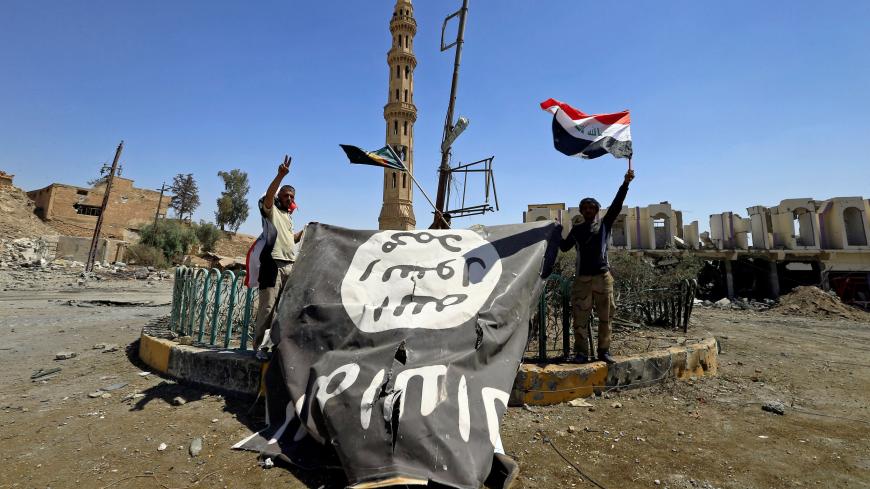 Members of the Shiite Popular Mobilization Units hold an Islamic State flag, which they pulled down, during the war against IS militants in Tal Afar, Iraq, Aug. 27, 2017. - REUTERS/Thaier Al-Sudani

The supposedly defeated Islamic State (IS) remains at the center of a circle of violence and retribution in areas of Iraq.

Iraqi parliamentary speaker Mohammed al-Halbusi is calling for community reconciliation to settle tribal and regional conflicts in Salahuddin and other provinces caused by differing attitudes toward IS. While some tribes battled against the extremist Sunni organization — which invaded western parts of Iraq in 2014 — others supported the organization, and their members even joined its ranks. Such diverging positions have generated a tribal and social divide, leading to murder and acts of revenge that go back for months and continue to plague the area.

A few examples include:

The bloody vengeance has created a level of fear, leading Sabah al-Mahlawi, leader of the Albu Mahal tribe, to warn May 2 against the random return of IS families, because their members will be killed. “This is due to the availability of weapons and weak law," he said.

The need for reconciliation has reached a peak, not only within the Sunni community, but also between the Sunni and Shiite communities as well. More than three years ago, more than 900 civilians disappeared from the Sunni areas IS held. While their fate remains unknown, the general consensus points an accusing finger at the Shiite PMU factions. (The PMU is an umbrella military organization of mainly Shiite factions, but there are some Sunni members as well.)

This is how the conflict and vengeance between those who supported IS and those who fought the organization have become exacerbated.

"Serious measures are required to bring about peace in the community,” Rafea al-Fahdawi, head of the Anbar anti-terrorism tribal council, told Al-Monitor. "The tribes in Anbar seek to end the tribal conflict, vengeance and retaliation, which has caused a big social divide between IS supporters and victims.”

Fahdawi said it is “a complicated” situation. “Family members were split up between IS supporters and opponents," Fahdawi said. "Killings were witnessed, with a father killing his own son and another killing his brother in the tribal community. This could lead to a series of acts of retaliation, given the customs.”

Calls for community reconciliation aren't new. In August 2017, the Anbar tribes released a document in which they rejected violence and retribution and committed to resolving problems stemming from the IS era. The document bans acts of vengeance, be they physical or moral, individual or collective, without referring to the judiciary or tribal customs.

The reconciliation efforts aren't limited to the tribes. They also involve the Anbar police command, “which witnesses the exchange of killings and retaliation as a result of IS actions,” said Col. Walid al-Mashhadani of the community police. “The police are impartial when dealing with a crime or a displacement. It does not matter whether the perpetrator is with or against IS. This is because the key goal is to end the vicious cycle of vengeance.”

Mashhadani noted that one practical measure includes “setting up community police stations in most of the areas, be they villages or rural, where very high rates of incidents are recorded.”

To promote reconciliation in Sunni areas, the head of the Sunni Endowment, Abdullatif al-Humaim, attended a March 31 community meeting to reconcile al-Fadous and Albu Heshmeh tribes in the Dujail district of Salahuddin province. Moreover, Halbusi, the parliament speaker, discussed this agenda April 11 with the Norwegian Center for Conflict Resolution (NOREF).

Nevertheless, some Sunni political forces call into question the purported humanitarian objectives of measures that seem politically motivated. Speaking to the press Jan. 8, Hamid al-Hayes, chairman of the military faction umbrella group Anbar Salvation Council, warned against the potential revival of terrorism through alleged "community reconciliation" and the subsequent return of IS leaders and Anbar tribal leaders who supported the organization.

Abdullah al-Kharbit, a member of parliament for the Sunni National Axis bloc (al-Mehwar al-Watani), told Al-Monitor, “The reconciliation will not be promoted unless the political parties focus on a settlement of the agenda relating to compensating those affected by and holding accountable the perpetrators of killings.”

He added, "The issue related to IS families is the most complex in the reconciliation dossier. This is because many Anbar residents fear them and fear that they will commit acts of killings and vengeance if [IS returns]."

Attempts to bring about community reconciliation have focused on invitations and conferences. Aras Habib Kareem, secretary-general of the Iraqi National Congress, called May 4 for reactivation of the reconciliation dossier. Also, on April 27, NOREF organized a conference on civil peace in Erbil (the headquarters of the Kurdistan Regional Council), and Minister of Displacement and Migration Nofal Baha Mousa discussed reasons why displaced families are not returning to their hometowns.

Yet such efforts need to be accompanied by practical steps to achieve tangible outcomes, which continue to be limited. They include what Qatari al-Samarmad, commander of al-Baghdadi tribal forces in Anbar, revealed to Al-Monitor: "The tribes in western Anbar agreed to allow the families of IS members to return to their houses after [they are subjected] to a security check and after making sure they aren't involved in any terrorist acts.”

Community reconciliation in the Sunni parts of Iraq has become a pressing need. Yet the reconstruction, return of the displaced and the provision of services depend on the availability of a solid foundation for civil peace to allow for indispensable societal and infrastructure development.