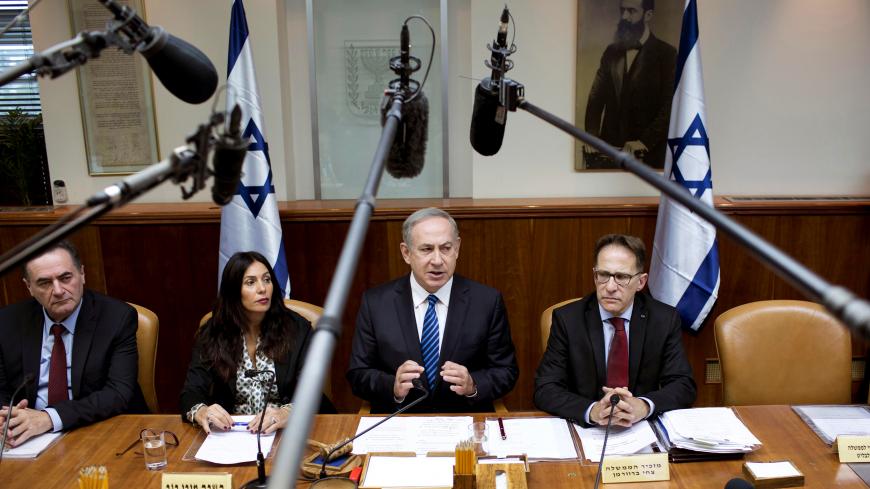 The Palestinian media have been avidly following the developments in the police investigations of Israeli Prime Minister Benjamin Netanyahu and his confidants that have been rocking Israel. The Palestinian media regularly cover events in Israel, often in a cynical tone, sometimes even with unabashed glee at the prospect of Netanyahu's being booted shamefaced out of office. All the Palestinian journalists spoken with for this article were astounded and impressed by how undaunted the Israeli media have been in reporting the Netanyahu affairs.

“I have been following all the reports and I know all the players involved,” a veteran Palestinian journalist at a West Bank newspaper told Al-Monitor. The journalist, who spoke on condition of anonymity, served nine years in an Israeli prison for security-related offenses. He said Palestinian prisoners have always watched Israeli television while in jail and have been exposed at length to the ways of Israeli politics. “We learned how the democratic election process works in Israel,” he noted. “The prisoners adopted the system in order to elect their leadership in a totally democratic fashion, while ensuring freedom of choice. After the establishment of the Palestinian Authority [PA], the democratic system was adopted in the elections for the president and parliament.”

The prisoners, he added, rejected the political systems of Arab states and opted for the one they had absorbed from “the Israeli enemy.” Unfortunately, “we have not been successful in implementing a free press and accustoming our leaders to it,” the journalist said.

Of particular note is the case of a former Palestinian intelligence officer, Fahmi Shabaneh, who in 2010 gave Channel 10 TV reporter Zvi Yehezkeli witness statements and tapes documenting corruption within Fatah, the main component of the PA, as well as sex scandals within the PA. The reason he preferred the Israeli reporter to local Palestinian ones was clear: No one in PA areas would have dared publish the information. After the “enemy” television channel aired its report, Shabaneh said Palestinian President Mahmoud Abbas had promised him he would root out corruption. Since then, his voice has not been heard.

“We know the Israeli reporters who are after Netanyahu and expose his actions,” a journalist from the West Bank city of Nablus told Al-Monitor on condition of anonymity. He named several Israeli investigative reporters admired as role models by journalists in the PA. “We like Raviv Drucker [Channel 10 News], Amnon Abramowitz [Hadashot news company], Guy Peleg [Hadashot], who embarrassed Netanyahu [by airing a tape in which Netanyahu’s son is heard discussing strippers] and Ben Caspit [Al-Monitor columnist].” They are doing the kind of work that a journalist in the PA can only dream of, he said. “It’s just as important here. Our people would have a better life if only we could do our job and expose all the thefts we see daily in the PA, in the leadership above and even down below among the local leadership.”

A Palestinian journalist working for a foreign news agency told Al-Monitor that he and his colleagues in the West Bank know that a courageous Palestinian expose of the kind conducted in Israel could result in murder. He blames Israel’s 50-year occupation of Palestinian territory for this state of affairs. “Without the occupation, we might have been able to build a more open system of government, like yours,” he said on condition of anonymity. “After all, we have learned a lot from you.”

In the Gaza Strip, the number of journalists per capita is probably the highest in the world. Some of the journalists who are fluent in Hebrew work for the Hamas organization that rules the enclave, monitoring Israeli media. This unit is tasked with gathering open source information, just as Israel’s Hatzav military intelligence gathering unit does.

A Gaza journalist who worked for the Hamas monitoring service told Al-Monitor that Hebrew-speaking Gaza reporters who gather information from Israeli media are impressed by the professionalism of their Israeli peers, and by the fact that they are not afraid to voice their opinions about their leadership. He spoke with great admiration tinged with envy about press freedom in Israel.

According to another Gaza journalist, someone who reported on the pervasive view in Gaza that Hamas has failed in its leadership role and only looks out for its close allies would immediately land in jail. “We have seen this [corruption] since Hamas took power [in 2007] and especially now, when things are so bad that there’s nothing to eat. They make sure their people are paid on time and also receive food and fuel rations. But what about all the others? If we could publish this, maybe everything would look different. Like they do on your side,” he told Al-Monitor on condition of anonymity.

Nonetheless, the Palestinian journalists in Gaza and the West Bank are sharply critical of the fact that Israel’s media is a beacon of freedom on every issue except security, especially when it relates to the Palestinians. “You are independent and courageous until it comes to the occupation,” a Palestinian journalist told Al-Monitor on condition of anonymity. “When there’s a mess and your army acts the way it does, you turn into obedient soldiers. You are not professionals to the very end.”