The arrest of a Palestinian government employee critical of President Mahmoud Abbas is indicative of the constraints on freedom of expression that Palestinian journalists face. 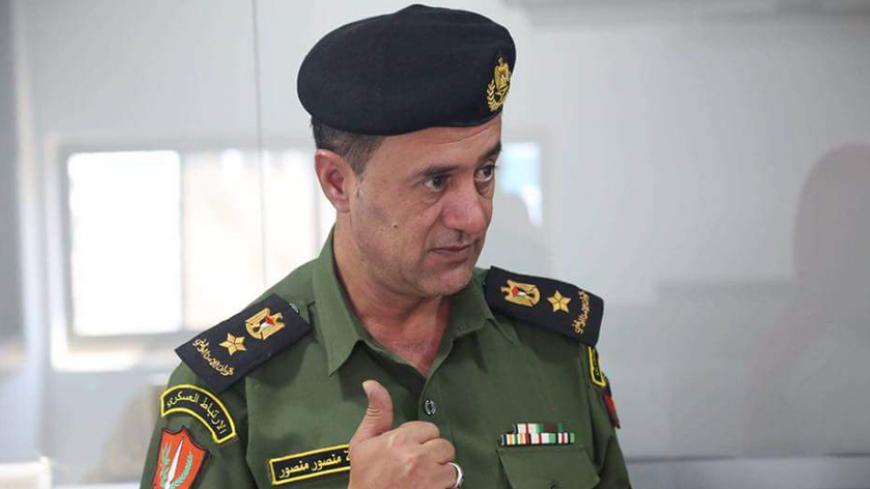 Osama Mansour Abu Arab, a communications officer with the Palestinian security services, was sentenced to a year and a half in prison for criticizing President Mahmoud Abbas. - Twitter/@KhaledAbuToameh

On Oct. 16, a Palestinian Authority (PA) military court handed down a year-and-a-half jail sentence to Osama Mansour Abu Arab, a communications officer with the Palestinian security services in charge of public relations. Abu Arab, who served in the unit responsible for security coordination with Israel, received a quick court martial in Ramallah after he used his Facebook page to mock Palestinian President Mahmoud Abbas and his decision to participate in the funeral of Israeli leader Shimon Peres.

“You can visit the mother of Yasser Hamduna [convicted of murdering an Israeli in 2003], who died in Israeli custody [on Sept. 25], and ask her what she thinks [about your attending the funeral],” Abu Arab wrote Sept. 30. He then went on to say that if Abbas made the decision to participate in the funeral on his own, he was wrong, and if he was following the suggestion of his advisers, he was misguided. “There should be no personal or friendly relations with the occupier, as long as they continue with their arrogant policies against our people,” Abu Arab asserted.

A few hours after Abu Arab's post appeared and became a hot topic in the PA, police showed up at his house to arrest him. Four days later, he was brought before a military court and sentenced. The severe sentence shocked not only Abu Arab’s family, but the entire Palestinian community in the West Bank and caused a huge commotion on social networks. It was because of this public pressure that Abbas, who also serves as commander in chief of the Palestinian Security Services, decided to pardon Abu Arab, although he was not reinstated to his job.

The “Abu Arab incident,” as it is being called by Palestinian journalists in the West Bank, has shone a spotlight on the issue of freedom of expression, especially the persecution of journalists by the Palestinian security forces. Journalists are afraid to do their job, worried that they could be sent to jail if they dare to criticize the PA and its leader.

In a conversation with Al-Monitor, a few Palestinian journalists said that the Abu Arab incident has turned the situation they face into a public issue by highlighting the limitations imposed on freedom of the press, which they described as similar to those found under some of the most notorious regimes around the world. “We may not be a dictatorship yet, but even the slightest word critical of the president or senior officers is likely to result in prison,” one Palestinian journalist who works for a major media outlet told Al-Monitor on condition of anonymity. He said that two senior journalists were arrested earlier this month, because Abbas and his inner circle did not like what they had written.

The most senior journalist to be arrested to date is Riad Hassan, the former head of the PA’s broadcasting authority and head of WAFA, the official PA news agency. Hassan published an article critical of the way the PA treats WAFA journalists working in southern Gaza. Hassan was fired after the article appeared and arrested a few days later. The cause given for his arrest was that evidence had allegedly been found linking him to corruption.

Palestinian journalists question the timing of the alleged corruption, as it was uncovered so quickly after Hassan’s article appeared. He was replaced by Fatah member Muhammad Asaf. Local reporters claim that Asaf was selected because he promised to remain loyal to the president and ensure that no one at the news agency criticized him.

Another arrest that sent shockwaves through the Palestinian journalist community was that of economics correspondent Mahmad Hadifa. Authorities detained him after he published a series of articles describing what really goes on in the PA Finance Ministry. His colleagues claim that all Hadifa did was publish the results of an investigation into the ministry’s budget and that most of what he reported was based on reliable information from sources at the ministry.

“Any criticism, even if it is based on fact and provides a huge public service to Palestinians, could end in arrest if the president or other senior PA officials don’t like what is written,” one veteran journalist told Al-Monitor on condition of anonymity. He added that the recent arrests serve as a warning signal, reminding journalists of what happens to anyone who fails to comply with the unwritten agreement with the authorities that nothing bad be said about the PA, especially about the person who heads it.

Another journalist in Ramallah who requested anonymity told Al-Monitor that over the years, journalists have learned to self-censor. “We’ve become the kind of journalists who simply submit reports [of events],” he said, noting that freedom of expression around sensitive topics like those involving Abbas, senior officials, the Palestinian security forces and other official institutions could all end in arrest.

Another journalist from Ramallah told Al-Monitor that he and his fellow reporters used to be more daring about what they wrote on their Facebook pages. When they realized, however, that they were under constant scrutiny by the security forces' cyber unit, they abandoned even this method of expressing themselves. They know that freedom of expression is dangerous, and that they could be sent to prison for it.

“We can’t really speak of a free press,” he said on condition of anonymity. “As Palestinian journalists, we cannot fight corruption or critique the situation in the Palestinian Authority like journalists in the free world. We are under attack on a daily basis. We must always be extra careful. All it takes is one wrong word for someone to come knocking on the door.”

Palestinian journalists report that there are some 2,500 West Bank members of the Journalists Union plus another 2,500 journalists who work as freelancers. The freelancers are called “baatal al-digital” (digital heroes), although they regret that they cannot afford to become actual heroes in their field.

One journalist summed up the situation, saying, “For any of us to be brave when faced with the security forces listening in on us, following us and waiting for us to fall is not a smart move, nor is it heroic. It is sheer stupidity.”