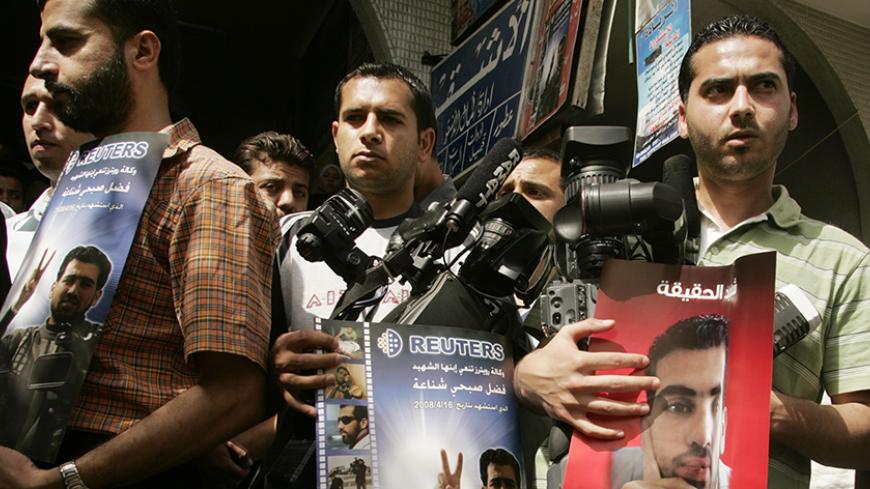 Palestinian journalists in the West Bank and Gaza Strip are closely following the unfolding case of Israeli Prime Minister Benjamin Netanyahu allegedly receiving favors or gifts. Their interest is not prompted only by glee at the possible downfall of the Israeli leader they despise, but also by appreciation and envy of Israeli democracy and press freedom that enable the questioning of the prime minister under caution and the investigative reporting against him by the media.

No journalists in Gaza — no matter how senior — would even think of criticizing the leaders of Hamas, and in the Palestinian Authority (PA), criticism of any kind against President Mahmoud Abbas, or exposure of corruption in the PA, could result in the journalist’s arrest.

“We all known there’s terrible corruption in the PA,” a senior veteran journalist from Ramallah, the seat of the PA in the West Bank, told Al-Monitor on condition of anonymity. “We know hundreds of stories about senior PA officials and about Abbas’ sons, but we can’t publish them or even talk openly about them.”

According to various reports, the PA has for years been plagued by corruption. The governmental structure put in place by the late Palestine Liberation Organization (PLO) leader Yasser Arafat did not include control and supervision mechanisms. Every Palestinian in the West Bank and Gaza knows full well that those closest to the seat of power often enjoy a lifestyle incompatible with the salary of a PA official.

“We saw PLO activists who arrived [in the West Bank and Gaza] from Libya and Tunisia [in the 1990s] with only the clothes on their backs, and a few months after the PA was established they were already driving around in Mercedes cars, wearing Italian suits and building ostentatious villas,” the journalist claimed. “To this day they are all rich, taken care of and no one can say a word or even ask where such wealth came from.”

European Union states that donate hundreds of millions of dollars in humanitarian aid to the PA have tried to establish supervisory mechanisms over the funds they provide, but according to Palestinian journalists who spoke with Al-Monitor, the top PA levels were more devious than all the oversight mechanisms, and they found loopholes through which to funnel some of the money into their own pockets.

The criticism discussed behind closed doors does not relate only to past malfeasance. A senior journalist who works for an Arabic language media outlet notes in a conversation with Al-Monitor that the sons of the Palestinian president are also mentioned among those making a fortune out of their family connection to Abbas.

Tareq Abbas, for example, is the director of a company that in the past employed Mohammed Rashid, a close confidant of Arafat and his moneyman, who was subsequently convicted by a Ramallah court of stealing millions of dollars from a Palestinian investment fund and from the PLO coffers, and transferring the money to bank accounts in various places around the world. Since the “cleaning of the stables” after Arafat’s death in 2004, Abbas's son Tareq has been serving as a director in the Palestinian investment fund that manages hundreds of millions of dollars, so that his father has almost complete control over the fund without anyone in the PA being allowed to express opposition or question its management. In 2012, Foreign Policy ran a story about the fortunes of Abbas’ sons in which the investigative reporters wondered whether there was any connection between the wealth they were accumulating and their family connection.

“We know the answer,” a Palestinian journalist told Al-Monitor on condition of anonymity. “Everyone knows that Tareq and Yasser Abbas immediately win every bid they put in, whether directly or through straw men.”

The journalist said that reporters have learned not to ask “unnecessary” questions, lest they lose their jobs, at best, or are sent to jail in a worst-case scenario. The media learned the limits of what was permissible and what was not in the affair of Mahmad Hadifa, an independent journalist who published a series of investigative reports about the goings on in the Palestinian Ministry of Economy in Ramallah. Hadifa was arrested by Palestinian security forces after the stories ran and was threatened, even though no one claimed his reports were false. On the contrary, he touched on issues troubling Palestinians in the West Bank and exposed irregularities in the most important economic office in the PA.

“Sometimes you can see criticism against Abbas’ sons or senior PA officials on social media,” another journalist told Al-Monitor on condition of anonymity. “But never in a way that might disclose the identity of the writer. Usually the critics are cautious and they ask rhetorical questions, but everyone knows what they mean.”

Only few such investigative reports were published — for instance investigative stories about corruption in the PA were published by Reuters and The Associated Press. The Palestinian researchers and reporters who helped to compile these stories were not named. In 2009, Reuters reported that firms run by Abbas' sons won US government aid contracts to repair roads in the Palestinian territories, and AP published leaked documents in 2015 allegedly exposing corruption by senior PA officials.

None of the people mentioned in the reporting were questioned or lost their jobs; coverage of the reported affairs in the Palestinian media was limited on orders from high up.

Many Palestinians who have been exposed to Israeli reporting about the investigations into Netanyahu’s alleged wrongdoing — which play prominently in the Palestinian media — are asking whether receiving gifts such as cigars and champagne constitute sufficient cause for his indictment, conviction and resignation. Some of the journalists with whom I spoke claim that receiving gifts is standard practice in the PA and is not considered a criminal offense.

“If we were able to talk about each and every present, and this were to result in an investigation and conviction,” said a senior journalist in the PA on condition of anonymity, “we wouldn’t have a functioning Palestinian Authority because everyone would already be in jail.”